Lauren and I got back to Our Little Town around 6pm last Saturday.  Thirteen hours later, we were headed to the State Fair.

The main purpose of this quick turnaround goes all the way back to May, when the 4H Drama Troupe won the Drama Festival.  The kids did a really nice job with their play – they wrote it, they rehearsed it under Jamie and Kim’s able direction, and they performed it with energy and flair on the day.  For this they got blue ribbons and invitations to perform at both the County Fair and the State Fair.

In between, Lauren and I went to Philadelphia.  Because we could.

If you’ve never been to the Wisconsin State Fair, it’s pretty much everything you’d think it would be.  There are innumerable vendors selling everything from leather goods to toys (mostly not of leather – for those you have to go to a rather different sort of venue).  There are displays of 4H art, photography, and other projects – my favorite this year being the chicken sculpted entirely of old egg shells.  I hope it won an award.  There’s a midway, of course, though we skipped it this year.  There is a giant building filled with nothing but stalls trying to sell you an even wider array of things than the vendors outside – everything from gutters to beads to hot sauces.  Seriously, there are probably five hundred vendors in that building.  Word of advice – stay away from any hot sauce labeled “Da Bomb,” as it has no flavor but burns with the heat of a thousand suns.  I am too old for that.

There is also food.  Food of almost every description.  There are steaks.  There are hot dogs, sausages, bratwursts, and ice creams.  There are cream puffs.  Lauren had poutine, and seemed to enjoy it.  There is a place that sells nothing but grilled cheese sandwiches (Tabitha reported that they were quite good), and another where you can get some of the best pastrami on rye outside of New York City.  There are so many kinds of food for sale that the State Fair has its own app dedicated to them.  There’s an entire subsection of the app labeled “Foods on a Stick.”

I kid you not.

And there are animals, of course.  Cattle.  Chickens.  Rabbits.  Goats.  Sheep.  Pigs.  No turkeys, though – not sure why.  We looked at most of them during the day, and honestly Maybelline could clean up at the State Fair – there were no Dwarf Hotot rabbits at all!  She’d have the field all to herself!  Hello state champion!

But mostly we were there for the theater.

They’ve moved the stage since the last time we were there.  Two years ago it was a semi-enclosed area tucked between two buildings – covered at the stage end, open at the audience end.  This year that area was filled with giant tractors, which may or may not be some kind of commentary but if it is I don’t know what it is supposed to be saying.  The stage and all of its surroundings have been moved to the north to a brand new building, entirely enclosed, with the theater stuff at one end and 4H exhibits at the other.  That’s where the eggshell chicken was. 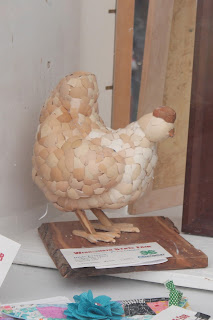 Our troupe was scheduled for two performances, one in the morning and one in the afternoon.

The morning performance went off largely without a hitch.  Everyone showed up on time.  Everyone remembered their lines.  The sound system worked.  The acting was energetic.  They did a marvelous job. 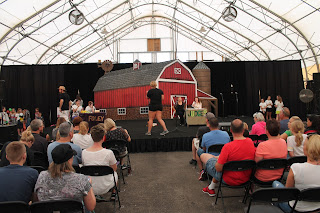 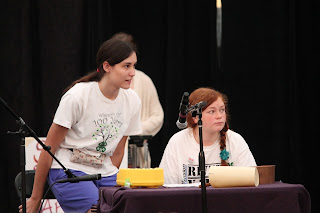 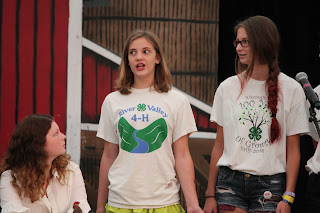 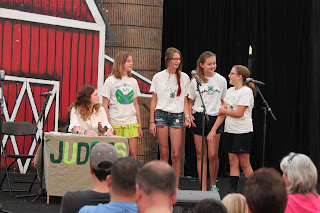 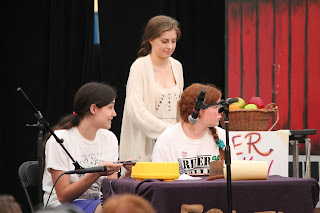 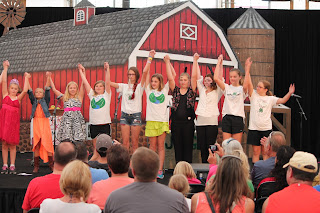 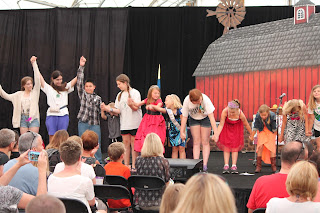 After the play we let the girls have the run of the State Fair.  It is a strange thing to realize that your children are old enough and responsible enough to do that – there is always going to be a piece of you that says “No!  Clearly they are still kindergartners and need my supervision at all times!”  And then they look at you from about the same height and you remember being that age and your own parents letting you wander around and you think, “Well, okay, maybe not.  Have a good time!”

Kim and I wandered around looking at the animals and the projects, and eventually Grandma and Grandpa came by with Cousins Brody and Marin and we continued to wander around.  It was good to see them.  But eventually it came time for the afternoon performance, and we headed back to the stage.

It turned out we didn’t have to hurry, as they were running nearly an hour behind schedule, but there we were.  Eventually the show started.

The second performance went very well from our perspective, but for some reason the sound guys didn’t actually turn on the mics until 4 minutes into a 12-minute play, which made the first part more of a pantomime than a play.  But by this point I’d pretty much memorized the script anyway, so I could fill in the details.

The kids did a very good job, and then it was over.

We walked around the fair a bit after that, and we rode the Sky Ride across the fair when it was time to go home.  We didn’t stay as late as we did two years ago, but even so it was a fourteen-hour day.

We’re late, but we have an exceptionally exceptional excuse!
Posted by David at 9:34 PM