We didn’t count on the potato chip bag exploding.

Last week we bundled ourselves and an astonishing amount of stuff into the van and headed west.  Our ultimate goal was Rocky Mountain National Park, a lovely spot that Kim and I had visited nearly two decades ago and which we thought the girls would enjoy.  As is our habit on such trips, we raided the local grocery store and came back with an intense amount of road food.

Road food has no nutritional value.  It is, in fact, negatively nutritious.  It actively sucks nutrients out of your body with every bite you take, and as such it is both delicious and required for any drive that crosses at least two state lines.  We had sugary treats.  We had salty treats – all of which I had declared acceptable, new diet be damned, because that’s what vacations are for, after all.  We had treats in bags.  We had treats in tubes.  We had treats in packages.  There may even have been treats in boxes tied with ribbons.  If our car broke down in western Nebraska and we had to huddle together for warmth on the prairie until help arrived we wouldn’t have to resort to cannibalism for – what? – weeks, and that kind of guarantee is a comfort to the traveler’s mind.

But you see, here is the thing.  Wisconsin is nearly at sea level, and our elevation is measured in hundreds of feet.  The elevation of our destination, however, is measured in thousands.  There are a few things that change as you make that climb.  For one thing, the air gets thin and it is hard to breathe and why we were vacationing in a place with no oxygen is an interesting question.  For another, the implication of thinner air is that the air pressure goes down as your elevation goes up.

We noticed this about ten miles from Estes Park, Colorado, when Tabitha discovered that the potato chip bags had all expanded to a rigid and quite frankly alarming fullness.  They had no give to them whatsoever. 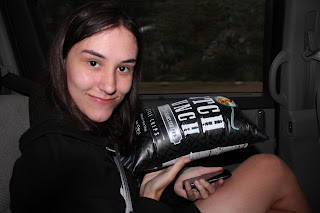 This was cause for great amusement, until one of them blew up.

Fortunately, it burst out the bottom.  On the plus side, this meant that we were not showered with the salty oily shrapnel of nutrition-free goodness.  On the down side, it meant that the back seat and floor of the van were now covered in a thin layer of pulverized deep fried potato slices – a layer that would prove difficult to clean out once we arrived at our destination, which had signs prominently warning us, “Do not keep food in your car, or else the bears will break in to get it.”

Great.  We were vacationing in a place with negative oxygen and positive bears.  It turned out surprisingly well, though.

How we got there is a long story.

We usually head east for our summer road trips.  My side of the family is mostly out in that general direction, as are many of my friends.  There are real Philadelphia cheesesteaks.  There is the Jersey shore.  If we have time we can sometimes get up to New York.

But this year diversification was in the air, so Rocky Mountain National Park it was.

We left on a clear and pleasant Monday morning, got about thirty miles, and then turned around to collect Tabitha’s purse, which she had left at home.  The retrieval of forgotten objects would turn out to be a running theme.

Our plan was to head west across southern Wisconsin and northern Iowa – my old route to graduate school, back when I had moved up to Our Little Town and was still taking classes at the University of Iowa – and have lunch at the Hamburg Inn #2 in Iowa City.

For those of you who have not had this pleasure, well, you should correct that situation.  The Hamburg Inn #2 in Iowa City is the best little diner in the midwest even if you sometimes have to park in Ames.  We had a lovely lunch. 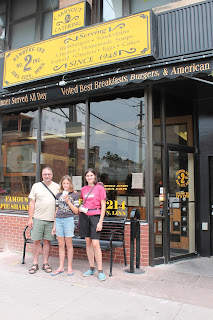 West of Des Moines, Iowa flattens out and you enter the long, flat miles of the Great Plains.  It’s green, though, and there are occasional towns and land features to keep you interested, such as the giant wind turbines with blades half again as big as the ones in Wisconsin, providing electrical power that nobody has to go to war over (which is why it is not popular among the right wing these days).  There are farms and trees.  It’s a pleasant drive.

And then you get to Nebraska, which is like western Iowa only more stretched out.  You have to focus a bit more.  Fortunately, we also brought cards.

We stopped for the night in Kearney, a bump along I-90 that has a number of hotels and restaurants, and from what we could tell is populated by very nice and helpful people.

Dinner was at a Runza.

We were told by a Nebraskan friend of ours that when one travels in Nebraska, dining at a Runza is a must.  Further, when doing so it is obligatory to have a Runza sandwich.  I took the plunge.

A Runza sandwich is a six-inch roll filled with ground beef, cabbage, onions, and spices.  If you’re familiar with eastern European cooking, it’s essentially a holopchi sandwich.  It was quite tasty, though one was enough. 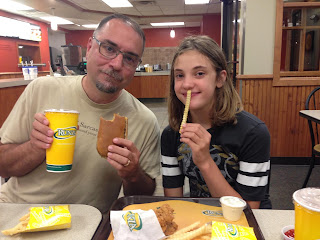 Tuesday morning got off to a slow start.  For one thing, the hotel we stayed at came with a light breakfast and the breakfast came with an extremely chatty hostess.  For another, the tire light that had worried us all trip turned out not to be a hoax.

When we bought the van the dealership made a point of saying that the tire pressure warning light was the thing that people most complained about in this model, that it would often give false warnings and the thing to do was to examine the tires if it went on and if they looked okay to just keep driving.  The light came on about a mile into our trip and stayed on until we got to Kearney.  Every time we’d stop we’d examine all the tires, and they all looked fine.

Except on Tuesday morning it was clear that the light had not been a hoax after all.  The passenger rear tire looked sad and weak.  Fortunately, directly across the street from our hotel was a place that replaced tires – a place that had a tire guy (a skinny young man named Braedon) who was willing to squeeze us in.  It turned out that somewhere we had picked up a nail just off the tread, so the tire could not be repaired.  It also turned out he had a replacement, and half an hour later – new tire installed – we were on our way.

Western Nebraska is for people who think that western Iowa is too exciting.  It flattens out further and begins to rise toward the High Plains, the towns and features get further and further apart, and they put billboards every so often so you can tell that you’re moving.

And then you get to eastern Colorado, which is for people who think western Nebraska was too exciting.  It’s just mile after mile after mile of open grazing land, hypnotic in its way, but distressingly vacant for this city-dweller’s tastes.

Naturally we cranked up Supertramp’s old album, Breakfast in America, for this part of the trip.  Doesn’t everyone?

We liked entering Colorado so much that we did it twice.

About an hour or so into Colorado Kim realized that she had left her purse at the rest stop where we had eaten lunch in western Nebraska, just about where you leave I-80 and get on I-76 headed for Denmark, capital of Colorado (don’t ask – apparently it’s a long-running inside joke among Tabitha’s friends, so I’m going to go with it).  Oddly enough, that had been a Runza too.

It was an auspicious beginning even so.
Posted by David at 11:17 PM