This past Saturday was Rabbit Fun Day here in Our Little Town.

Rabbit Fun Day is the pre-County-Fair show, the one that doesn’t take place in the middle of thousands of people.  It’s just the Rabbit Project members and the judges.  It’s kind of low key that way.

Lauren and I showed up Friday night to help set the thing up, and a good thing we did since other than the Project Leader and one other 4H member, we were the entire crew.  Fortunately rabbits are a lot less intensive than cats – the cat show requires setting up dozens of the special tables that 4H uses, the ones constructed of depleted uranium and grief, as well as 50-75 wire cages and a pile of chairs.  Rabbits only need about a dozen of those tables, the same pile of chairs, and no cages.

We showed up at 7:30 the next morning with Maybelline, Lauren’s Dwarf Hotot rabbit.  This is Maybelline’s first show, and she took it like a professional, all calm and cool and collected.  Presidential candidates could take lessons from Maybelline.

The other nice thing about Rabbit Fun Day is that it is brief.

There is a period of judging, where Maybelline’s relative merits can be weighed by someone more qualified than I am.  Granted, this is not saying much.  But I know this particular judge, and she is fully rabbit-qualified.  You can also go over to the corner and do your Showmanship routine, which tests the rabbit knowledge of each exhibitor. 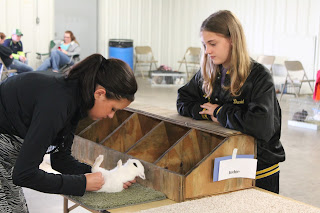 Maybelline got Best in Breed, which is impressive even if there weren’t any other Dwarf Hotots there.  They don’t have to give that ribbon at all.  So we were happy about that.

Then comes the Best in Show judging, where all of the Best of Breed bunnies come together for a final round of judging by both of the judges. 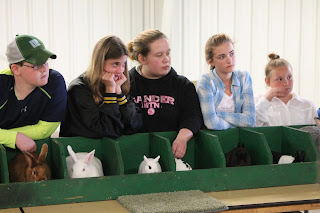 We weren’t expecting much this round, since Maybelline is a junior doe and Best in Show generally goes to senior rabbits, but for a while there the judges were paying rather close attention to her.  Eventually they gave her an Honorable Mention, which means she was ranked 3rd or 4th out of the forty or so rabbits there.  Not too bad.

Add to that the blue ribbon Lauren got for Showmanship, and it was a successful day. 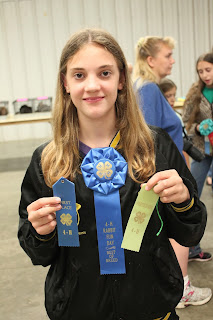 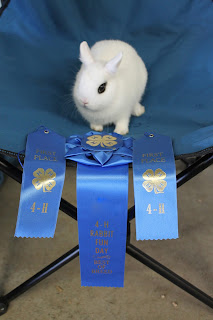 Oh. Dwarf. I guess that should have alerted me to the fact that this is a small bunny. I was about to comment on how petite she is.

Well, she's a junior (under 6 months old), which means she's actually small even for a Dwarf Hotot. She'll get a bit bigger, though not much.

What I think is sharp about this breed is the black eyeliner they have all the way around their eyes. They're like 1920s silent movie stars. Maybelline is our own miniature Theda Bara. :)