My new glasses arrived this week.

I did not pick them out.  Lauren insists that I have no style whatsoever, which is an outright falsehood.  I have a style.  It is just not one that anyone would choose voluntarily or that looks good on actual human beings.  When I explain this to her she just rolls her eyes.  “That's the same thing, Dad,” she says.

Honestly, where does this attitude come from?

So we went over to the eye care place and spent an evening picking out frames.  There are a lot of frames in that place.  They line the walls, spill out into the aisles, and constitute a fire hazard.  Someone should look into this.  Except that the people who walk into places like that cannot – pretty much by definition – look very closely or accurately at the problem.  And so the problem continues unabated.

Won’t someone think of the myopic?

Eventually we settled on two frames, because they had a “buy one get one free” offer.  Then they explained how much the lenses cost – they sell them by the lens, not the pair, in case you’re thinking of the “pre-WWI German aristocrat” monocle look – and we agreed that perhaps one pair was sufficient for now thank you very much.

And then we waited.

The glasses actually came in on Wednesday, which was of course the day that my back decided it no longer wanted to function.  It does that every couple of years, often for no reason at all.  I did quite a number on it back in the 90s, and once that happens it never quite heals and all you have to do to get it to do it again is exist incorrectly, which is something I am apparently quite good at.  I cannot tell you how often people insist on correcting me on that point.  So going over to get the new specs on Wednesday was not much of a priority.

I got them Thursday, but despite testing them in the shop they turned out to be too loose when I got them home, so I had to go back and get them tightened on Friday.  And now here they are. 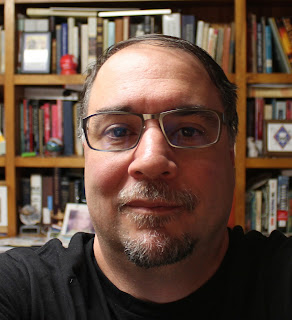 It’s always a bit of an adjustment, new glasses.  Everything looks all warped and woozely, like I’m staring out of the bottom of a wine glass, as if I need further incentive to do that.  I expect to find heffalumps soon.  Actually, this might explain a lot about Winnie the Pooh. 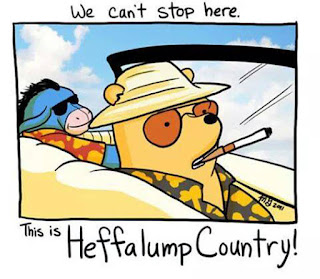