1. The semester has finally wound itself down to a nubbin, and pretty soon I will be able to focus on all of the things I have been putting off while frantically scrambling to get the semester done.  It’s been a long couple of weeks – rewriting the last third of a course on the fly, in two different versions, will do that to you – but it seems to have come in for a soft landing.  Who knows?  Perhaps there will even be more bloggage in the near future!

2. The end of the school year is always somewhat bittersweet, really.  I like my students, even the ones who occasionally make me crazy, and now they are gone to the next phase of their lives.  I enjoy teaching, and I’m pretty good at it.  I like the energy of a college campus.  But I’ll appreciate the sleep, now that it’s over.  Yesterday I closed up my office at Mid-Range Campus and turned in my keys, and now it is time to move on to the next task.  Given the rabid assaults on education from Governor Teabagger (a wholly-owned subsidiary of Koch Industries) this year, it is an open question whether that next task will be anything like the previous ones.  We’ll see.

3. Grading finals is so much easier than grading midterms, since they don’t get them back and therefore you don’t have to write comments.

4. We have freed the little chickens from their wire enclosure and let them mingle with last year’s chickens.  So far there has been no trouble.  This may be because we moved Sully, The World’s Stupidest Life Form into the stall next door.  He can hear his flock, but he can’t see them or interact with them anymore.  I have to admit he looks rather crestfallen about it – chickens are flock animals, and you have to feel bad for poor Sully, nuisance that he is.  I may put up the wire enclosure again and just stick Sully in it.  That way he can be with his flock and not harm anyone.

5. Today is Lauren’s last track meet.  They have a busy but rather condensed schedule, over at Mighty Clever Guy Middle School.  I made it to one meet last week, where I ended up pressed into service as a timer.  It went well, and we dodged most of the rain.  Lauren did pretty well in her events too.  Today is also a cool, rainy sort of English summer day (what we in Wisconsin call “late March”), so it will be interesting to see how it unfolds.

6. Did you know that IKEA now sells bulk candy?  And that most of it is safe for people with nut allergies?  This is a dangerous, dangerous discovery, but a fun one.  We were scooping it into bags by the fistful this past weekend when a guy came over to join us – he turned out to be Swedish and we had a long conversation about the merits of salt licorice (Swedes love it, the rest of the world wisely regards it as a form of road construction material) and Finnish licorice (apparently better than Swedish, according to the Swede).

7. I need a haircut.  I need new glasses.  Next week I may be unrecognizable.  Now would be a good time to learn how to be a spy.

8. Apparently I missed International Horton Day last week, because I was too busy with finals.  I suppose most people did, which is probably because I created this holiday a couple of years ago and it hasn’t caught on yet.  But it should.  Every year should have a day devoted just to the idea of being kind to people.

On the fifteenth of May, in the jungle of Nool,
In the heat of the day, in the cool of the pool,
He was splashing, enjoying the jungle’s great joys,
When Horton the elephant heard a small noise…

9. Never underestimate the power of a group of friends with free time, disposable income, and access to metal chickens.  Knock, knock… 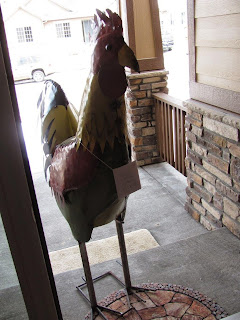 10. We’re already booked pretty solid for the summer.  How did that happen?
Posted by David at 12:04 PM