Down on the Farm

Somewhere over the last few years I have become a farmer.

Not a real farmer, I suppose.  I live in town.  I don’t plant crops to sell.  The byzantine world of agriculture and its regulatory apparatus is mostly opaque to me.  I earn my living doing things that can be done indoors out of the wet, with very little heavy lifting or contact with the soil.

And yet I find myself far more involved with such things than my suburban upbringing and academic profession would have ever predicted.

Kim and I spent a good chunk of yesterday afternoon out at our friend’s barn, trying to figure out how to build an enclosure for Lauren’s turkeys.  They’ve been happily ensconced in their little stall out there for a couple of months now, but the thing about turkeys is that they grow really big really fast and it is clear that they need some more space. 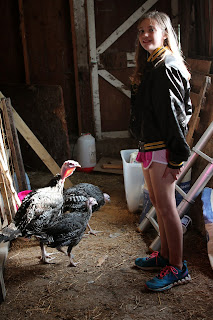 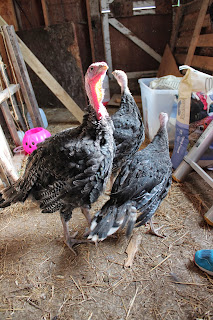 This was a couple of weeks ago.  They're bigger now.

Their stall is out by the corner of the barn, and there is a Dutch door right there that leads out to a pasture.  Most of that pasture has been claimed by another person who has chickens out there – it’s going to be a garden – but the wire fence that they put up around their claim leaves us with two nice-sized alleys alongside it, one between the garden and the barn and the other between the garden and the original fence.  The plan is to cap off the end by the barn, put bird netting over the top, and put a swinging pasture gate by the door so we can shoo the turkeys out and let them roam that area.

Kim had to explain to me what a pasture gate was.  There are very few pastures in suburban Philadelphia, where I spent my formative years.

The long-term plan is for the pasture gate to swing and allow the chickens to have the alley between the garden and the original fence while still separating them from the turkeys, which will require further construction.  But the chickens are okay where they are for now.  I put Sully, The World’s Stupidest Life Form back in with his flock (in a wire enclosure of his own) and he was much happier there, except that one of the hens insisted on going after this year’s flock of chickens.  So yesterday Lauren and her friend tricked out the other stall and we moved all of this year’s chickens over to it, which allowed us to let Sully out of the wire enclosure to join his flock for real.  So now we have two stalls worth of happy chickens.

They give us a lot of eggs, those chickens.  We are self-sufficient in eggs now.  Rocky, Venus, and Puff combine to lay 2-3 eggs per day, and we just don’t eat that many eggs no matter how hard we try.  This is a nice problem to have, given the fearsome toll that the avian flu is taking on chickens these days – wholesale egg prices have tripled in the last few months, which is a fact that I never would have expected to know at all, let alone be able to recite off the top of my head – but it is a problem nonetheless.  We’re doing a lot more baking than we used to do.  Also, quiches.

On the way out to the barn we stopped at the Farmer’s Market and bought some pepper plants.

Last weekend’s project was putting in new raised bed gardens in the back yard, which meant putting together a fair amount of lumber, having a yard of topsoil delivered (it was waiting in a big pile in our driveway when we got home from a day out last Saturday), and ferrying the soil to the raised bed structures one wheelbarrow-load at a time.  Kim has a whole bunch of things to plant there (and in the gardens alongside the house, since a yard of topsoil is a whole lot of dirt and the rest of it had to go somewhere), but hadn’t gotten any peppers.  Last year I didn’t do anything with the peppers so she figured I wouldn’t need any this year, but I’m going to try harder this year.  So now I have jalapenos and an assortment of other random hot peppers, and there will be hot pepper jelly later this summer.

This is all on top of the new rabbit that Lauren and Kim came home with on Saturday. 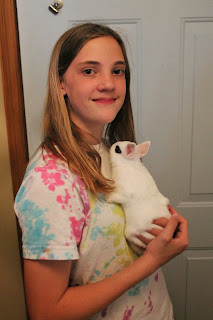 It’s a Dwarf Hotot, just like Milkshake, except this one is a doe.  Milkshake has aged out of 4H Fair competition now – his black eyeband is beginning to break up, and the dark spot on his ear has intensified to “Disqualification” levels – so in order for Lauren to keep participating we needed a new rabbit.

No, Milo wouldn’t do.  Milo is your basic domestic rabbit, non-pedigreed and mostly there to remind you that you don’t need papers to be adorable.  But adorable doesn’t cut it when it comes to the Fair.  The Fair is a harsh place sometimes.

Kim and Lauren went up to meet the breeder at a truck stop about halfway between our house and theirs, and they came home with Maybelline.

But of course, you can’t just bring home a rabbit and expect that to be the end of it.  You have to prepare for the rabbit.  This meant dragging out the extra hutch.  It meant putting a sloped roof on it (several 2x4s wired to the top, and a piece of plywood nailed to them - readjusted because the overhang was too large and it interfered with the doors - and then the whole thing covered with a tarp held on by binder clips) to keep out the rain.  It meant moving the rhubarb plant so we could put the new hutch next to the old one – on Milkshake’s side – without drowning the poor plant in rabbit poop.  It meant fitting out the new hutch with water bowls, feeders, and a nice cardboard box to hide in and/or eat.  And finding a way to lock the door to the hutch so there wouldn't be a repeat of the "neighbor kids" fiasco of a couple summers ago.

It meant a lot of animal husbandry, in other words.

The next morning it became apparent that Milkshake was very excited to have a female neighbor.  I suppose “excited” would be a good word for a rabbit that literally overnight chewed a hole through his hutch in order to stand on top of it and gaze longingly at the girl in the next pen.  He was a very excited rabbit, Milkshake.  Yes he was.

This meant a fair amount of wirework to repair the hutch with something less chewable.

So I’m not a real farmer, but relative to my native indoorsy-ness I often feel like one.  It’s not a bad thing, just a curious one.
Posted by David at 10:57 AM