1. Once again it’s the time of the semester where everything caves in at once.  It’s a time of sleepless nights, long days, and far too many decisions made based on available resources rather than what actually might be the best course of action.  I wish I were one of those lazy professors I keep hearing the Teabaggers yell and scream about these days, as I’d have more free time and probably fewer health issues.  I don't actually know any of those professors - all of the ones I know are as worn to a nub as I am, if not more so - which inclines me to think that they are just as fictional as the rest of the Teabagger moral universe.

2. This Sunday was Lauren’s piano recital.  Every year her teacher gathers up all of her students (and recently the students of another teacher who is a friend of hers) and plops them all down in a nice space here in Our Little Town for a concert.  It’s an appreciative audience and there is food after, so three cheers all around, I say.  This is Lauren’s sixth year in piano and she is reaching the point in her life where other interests are starting to press in, so it may end up being her last.  We’re going to let that decision slide until the fall, though she’s earned the right to make her own decision when the time comes.  She had a solo piece for this recital, which she did very well, and then I joined her up on stage for a duet.  If this actually was her last recital, I’m that much more glad I got to be part of it. 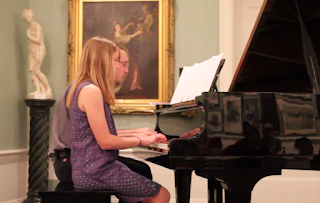 3. Tabitha had a piece of artwork up in the local mall a couple of weeks ago as part of the school district’s show there.  We somehow managed not to find out about this show until nearly a week after it was over, which is symptomatic of larger distractions I suppose.  But it was a lovely watercolor and she worked very hard on it. 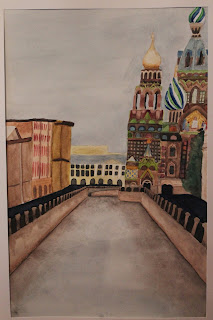 4. All of the chickens are now out at the barn and our living room no longer smells of poultry.  The three surviving turkeys seem to be thriving in their sweetly goofy sort of way, and this year’s flock of chicks is penned up behind a wire fence in the same large stall as last year’s chickens so they can get used to each other.  Eventually we'll let them mingle freely.  We’re not really sure what is going to happen with the flocks this year, as the avian flu that is slicing and dicing its way through the midwest has come awfully close and the odds of us having any poultry show at this summer’s 4H County Fair are dimming by the day.  We remain optimistic, however.

5. If nothing else we have our own supply of eggs, which may well be a rare and precious thing over the next few months.

6. We went up to our friends Heidi and Travis’ house this weekend for a Kentucky Derby party, where I had my very first actual mint julep prepared by an actual Louisville KY native.  It was quite tasty.  And the horse I randomly picked because I liked the name actually came in fourth, missing out on the money by less than half a length.  And if that ain’t the story of my world sometimes, I don’t know what is.  I've never understood the whole thing about horse racing - it seems like an awful lot of buildup and then BAM! it's over before you even know what happened, which is just far too much like the set-up to a vaguely off-color joke, really.  But a good time was had by all.

7. Somewhere the NHL playoffs are going on, and I have not had time to watch.  This is a travesty.  Of course at this point I have only one team left that I have any kind of interest in seeing win (the Minnesota Wild), since my two top teams were eliminated either in the first round or sometime back in February.  Mostly I’m left with teams I don’t care about either way (Tampa Bay, Washington, Calgary, Anaheim, Montreal) or teams I actively dislike (New York, Chicago).  So missing the playoffs hasn't been all that traumatic, now that I think about it.

8. I’m not watching much soccer either, and I've got an entire season of Broadchurch to binge-watch next week after my last class.  My to-read pile has not changed appreciably in about a month.  There are simple projects that even I could do around the house that remain undone despite my honest intentions otherwise (as opposed to more complicated projects that I generally hope will just go away on their own).  My office is a nightmare of paper.  There are just so many things to do that I may just throw up my hands and start over from scratch.

9. Local Businessman High had its annual academic achievement evening a Monday or two ago, and Tabitha got a very nice certificate for her work in her first year there, so far.  It was a well-run ceremony – short, but still managing to call all the names – and there were many proud parents there.  Ourselves very much included.

10. Is it just me or has the batshit insanity of the modern American right wing been amped up a few notches this spring?  I’ve been trying not to pay attention to it as much as possible, on the theory that I don’t even have time for people I like and respect these days and therefore devoting time to people who qualify on neither count would be wasteful, but sweet dancing monkeys on a stick do they make it hard for the rest of us to live normal lives.  It is my humble suggestion that Texas be sold back to Mexico in exchange for a burrito and a large soft drink, if they’ll even pay that much for it, so that the rest of us can go back to civilized life.

11. Once again I found myself working the food booth at the 4H Cat Show despite the fact that neither of my children were actually showing a cat.  Strange things mystifying.

12. We covered the Nazis in Western Civ last week.  Nobody was stupid enough to suggest that they were Socialists - a statistical certainty in any online situation where the general public is allowed to comment, sadly - and I took that as a good sign of the intellectual health and future prospects of my students.
Posted by David at 10:05 PM