Welcome to the 4H Zone!

This is the first Saturday in weeks where I haven’t had to rocket out of bed at a thoroughly ridiculous hour in order to accomplish something.

Oh, there is still plenty to accomplish.  There are two piles of exams that need to be graded.  I finally got the lawn mower running yesterday – a surprisingly complex process this year – but ran out of time to mow the lawn, so that task remains on the list.  I’d like to start excavating my office from the avalanche of paper that has buried most of it over the course of the semester.  On and on.  But that is something for a later time, a more civilized hour.

Last Saturday was an early Saturday.

It was the 4H Drama Fest down at Home Campus, an event for which our troupe has been putting in long hours for months.  We write our own play (he said, as if he had anything to do with it – thanks, Addie and Jamie!).  Kim and Jamie handle the actors – casting the play, directing it, coming up with blocking and props and such.  Kris made the cast shirts for the first act, which were adorable in a gross-out kind of way.  We built a time machine, painted backdrops and hung them from the flyspace, and wrote lighting cues.  And there were rehearsals – weekly, then as the event grew closer twice-weekly.

And suddenly, there it was: showtime.

Of course, if you’ve worked in theater long enough you know that nothing ever quite goes off as planned.  The sound guy basically forgot about the entire event and never did set anything up, so as someone who is both involved in this project as a parent and employed by Home Campus as part of the performing arts staff, I got a call at about 7:50am asking if I could come in and figure something out.  Fortunately I was already up and planning to come in early – one of the other acts our troupe was presenting was four of the younger girls singing an adorable old Dinah Shore song, and that happened close to the beginning of the day – so in I went.

Now, what I know about sound could be stuffed into a thimble with room left over for a libertarian’s social conscience and a donut.  I’m a lighting guy, not a sound guy.  Fortunately one of the big singing groups there had a sound system that we could use, and all I needed to do was make it possible for that to happen, which involved a fair amount of running about, opening locked doors, and making sure that equipment was in fact turned on.  It was a frantic hour or two, but it all got done.

And suddenly, this time for real: showtime.

It’s a day-long festival, this event.  4H clubs from all over the county get 20-minute blocks to get their plays loaded in, performed, and struck, after which the judges give them both critiques and – in the grand tradition of 4H – ribbons.  Recently they’ve added entre-acte singing groups – while the judging is going on, small groups of singers can perform onstage to keep things moving forward.  They’re not judged, but it’s fun.

For our troupe, the singers went on in the morning and the play was scheduled for the afternoon.

Technically I was in charge of the singers, having been volunteered as a group leader earlier this year.  In practice, this meant that I signed the paperwork and the mothers took care of the rehearsing and the actual work, which ended up working out just fine.  They chose the old song “Sweet Violets,” and spent some time in the morning rehearsing out on the grass before we shuffled them in and onstage.  I didn’t get any pictures of them onstage, as I was the shuffler that day and got to see them perform from the vantage point of the stage-right wing, but they did a marvelous job.  The audience laughed in all the right places, the girls hit all their lines, and a good time was had by all. 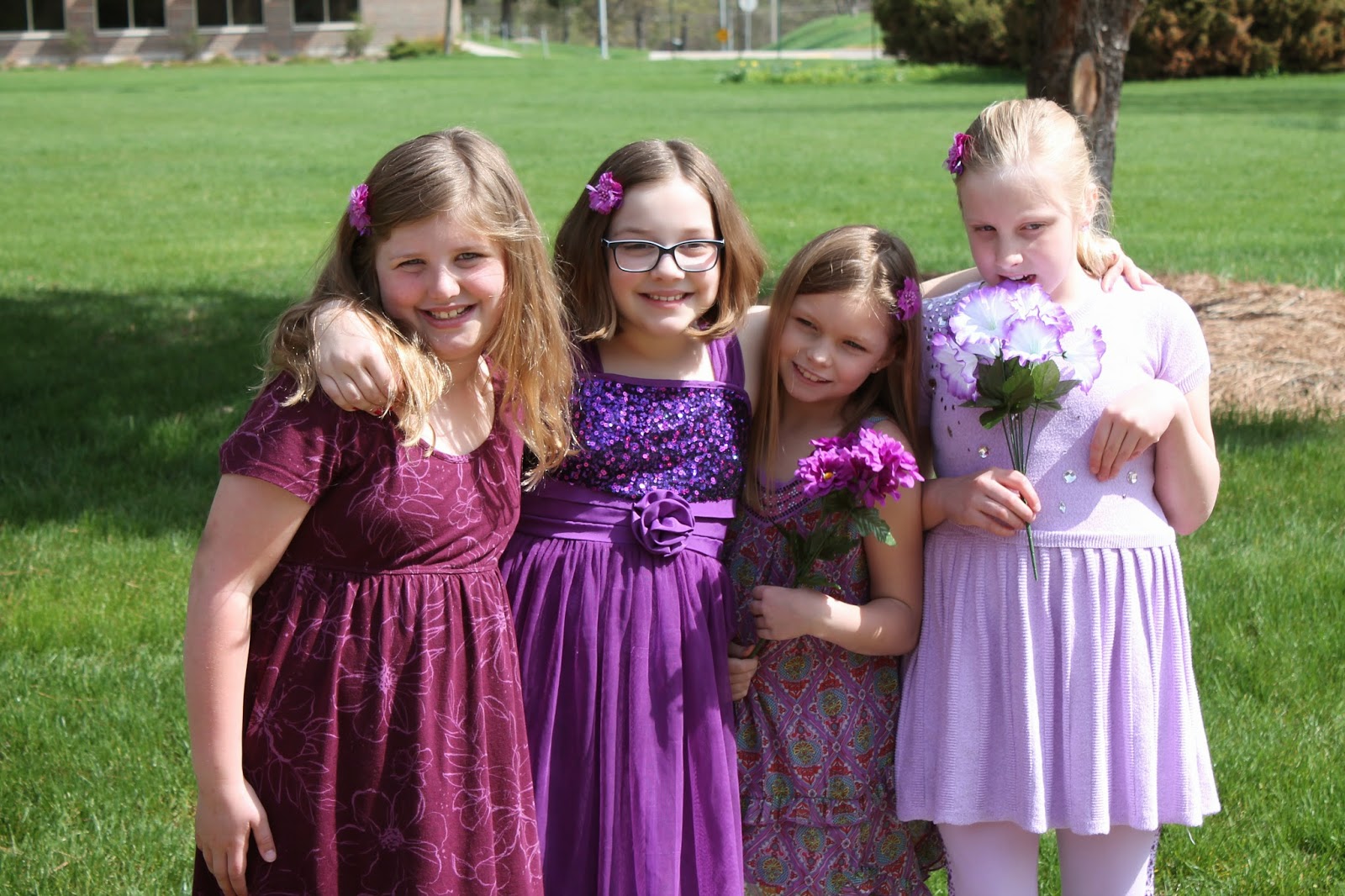 Eventually we got to the play.

This is the 100th Anniversary of 4H here in Wisconsin, so our intrepid playwrights decided to write something on that theme.  A bunch of the 4Hers went to the local library to do some research on this and discovered an interesting fact – about a hundred years ago there were campaigns all across the country (including right here in Our Little Town) to kill flies.  You’d get 10 cents for every hundred flies turned in, which was pretty good money in 1914.  One particular boy here turned in 14,800 flies and presumably spent the rest of his life living in luxury off the proceeds.  So our playwrights decided to write a play based on the idea that this is what caught on rather than 4H – that instead of having a 4H Fair every year, there’d be Fly Fest.  And what if someone went back in time and changed that back to 4H?  Well, then you’d have a drama, wouldn’t you?

We got into places.  As a backstage guy I think it’s important that the crew get some credit – there’s always photos of the cast, but the crew is often overlooked – so here they are, our sound op, lighting board op, and fly op. 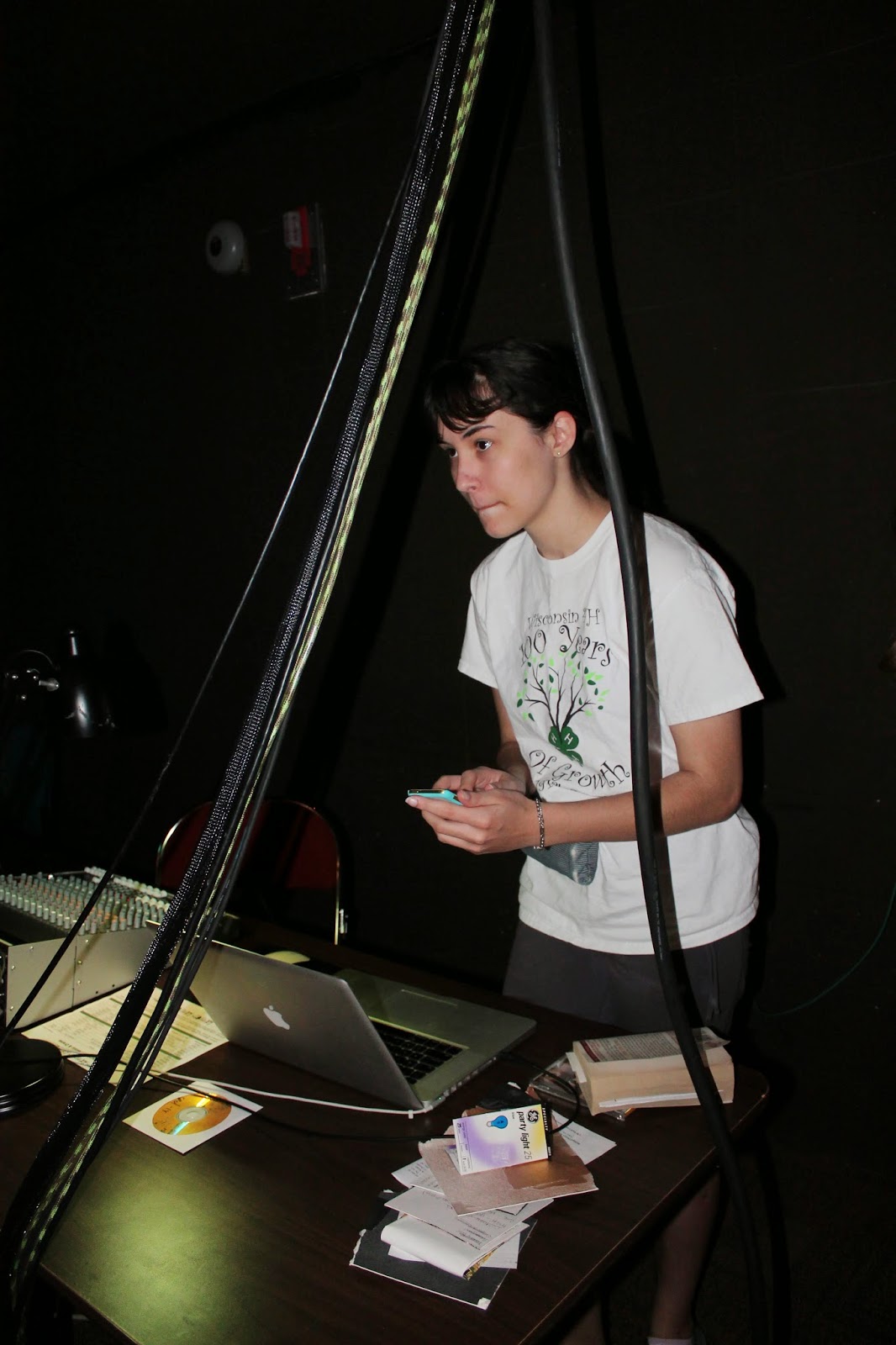 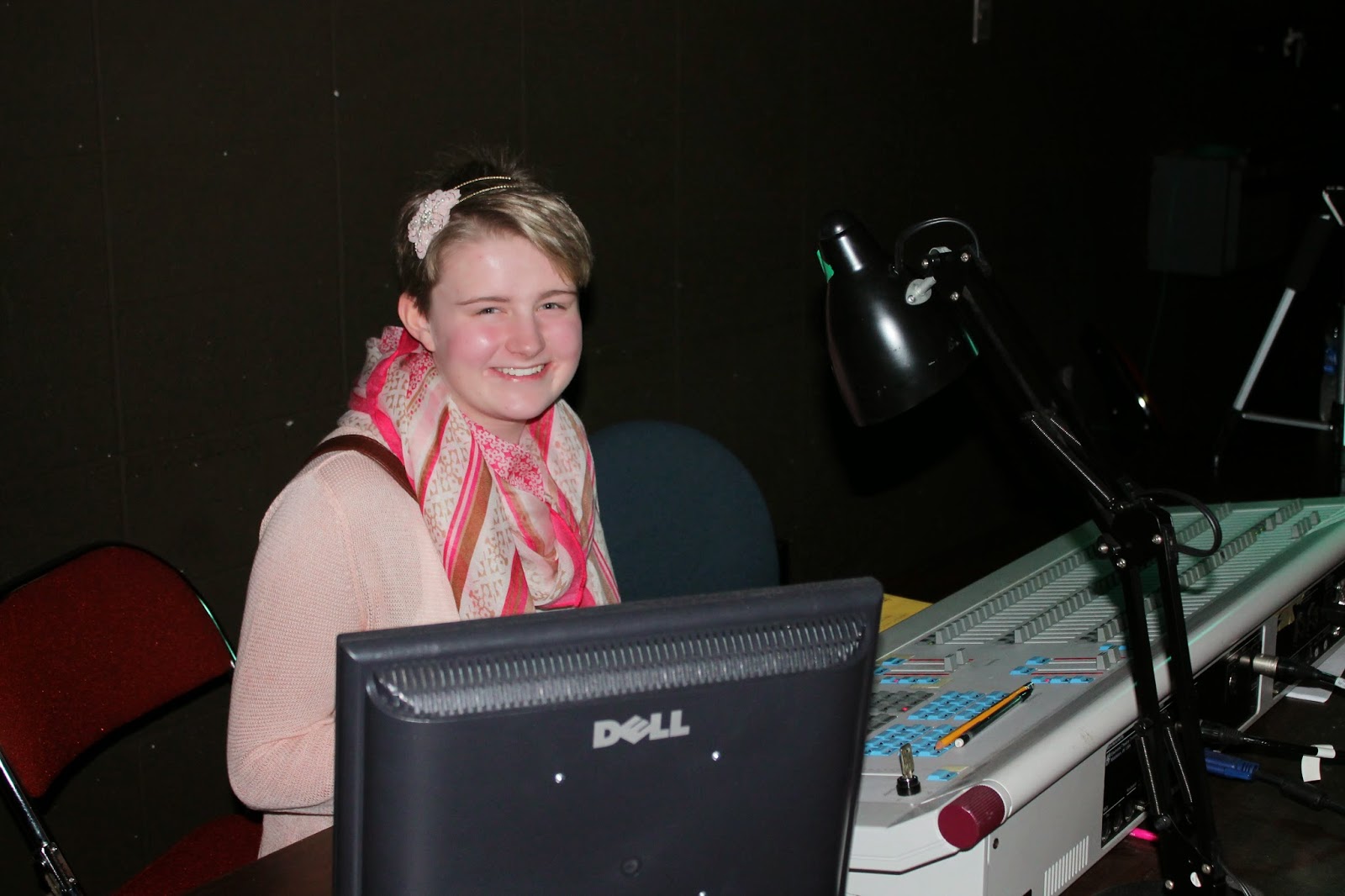 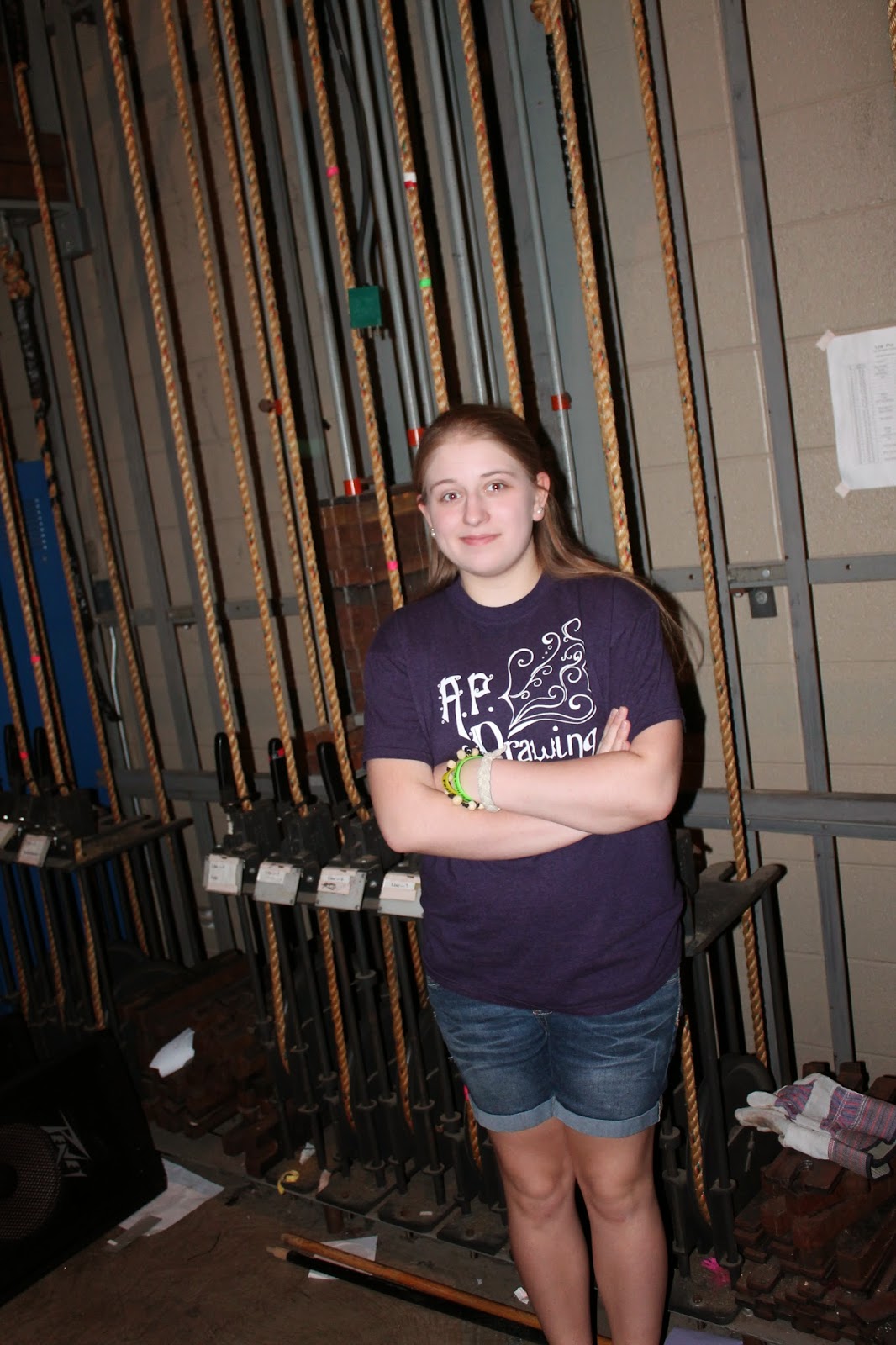 The play opens with preparations being made for this year’s Fly Fest, an annual event dedicated to continuing the Great Work of the past century, and also a few other things – note the silver time machine that will be exhibited.  I can’t tell you how much I loved those Fly Fest shirts.  I keep thinking we should sell them as a fundraiser.  I’d buy one.  The narrator - in the black and white top - gives us the basic set up, and then the game is afoot. 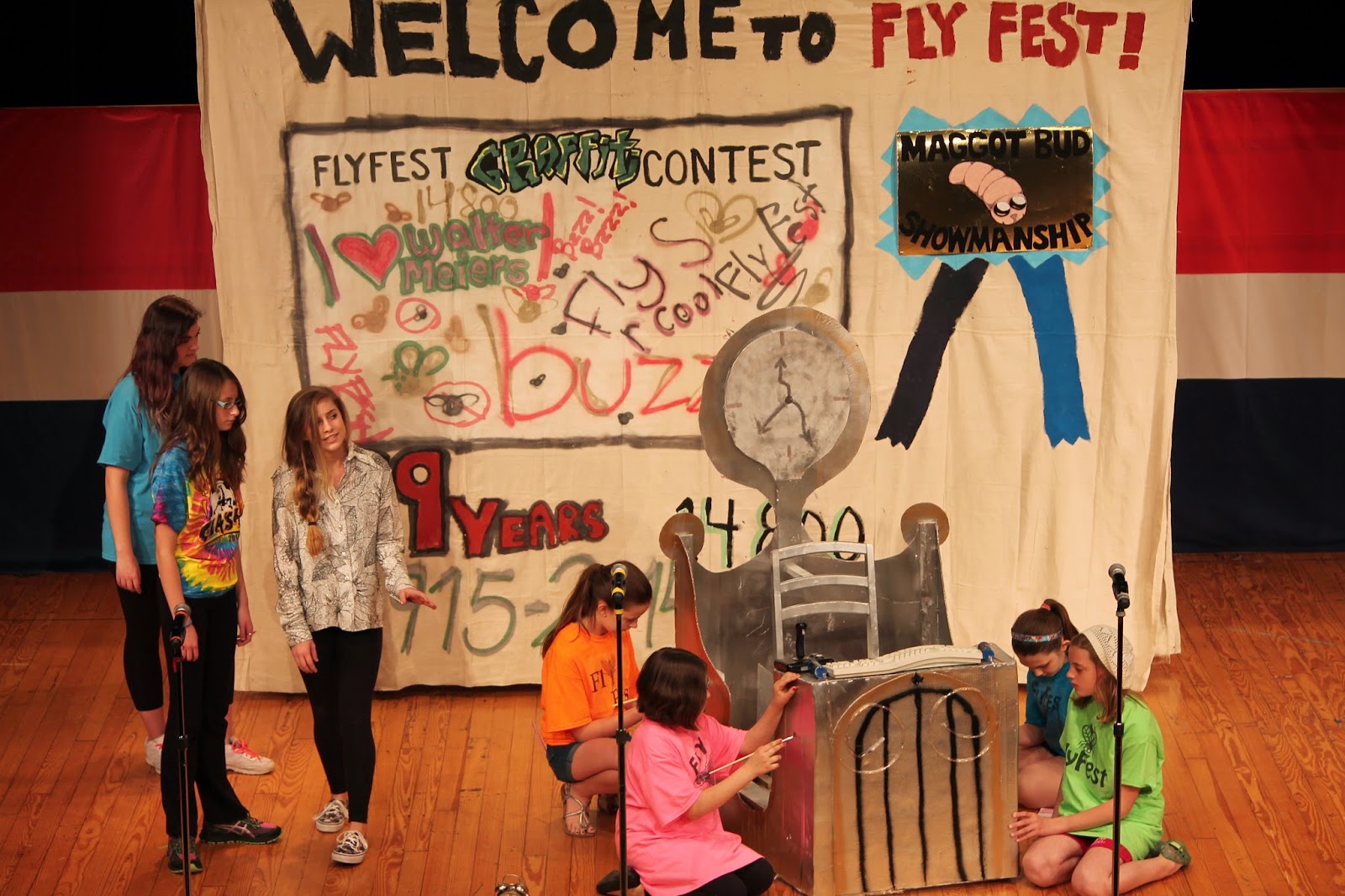 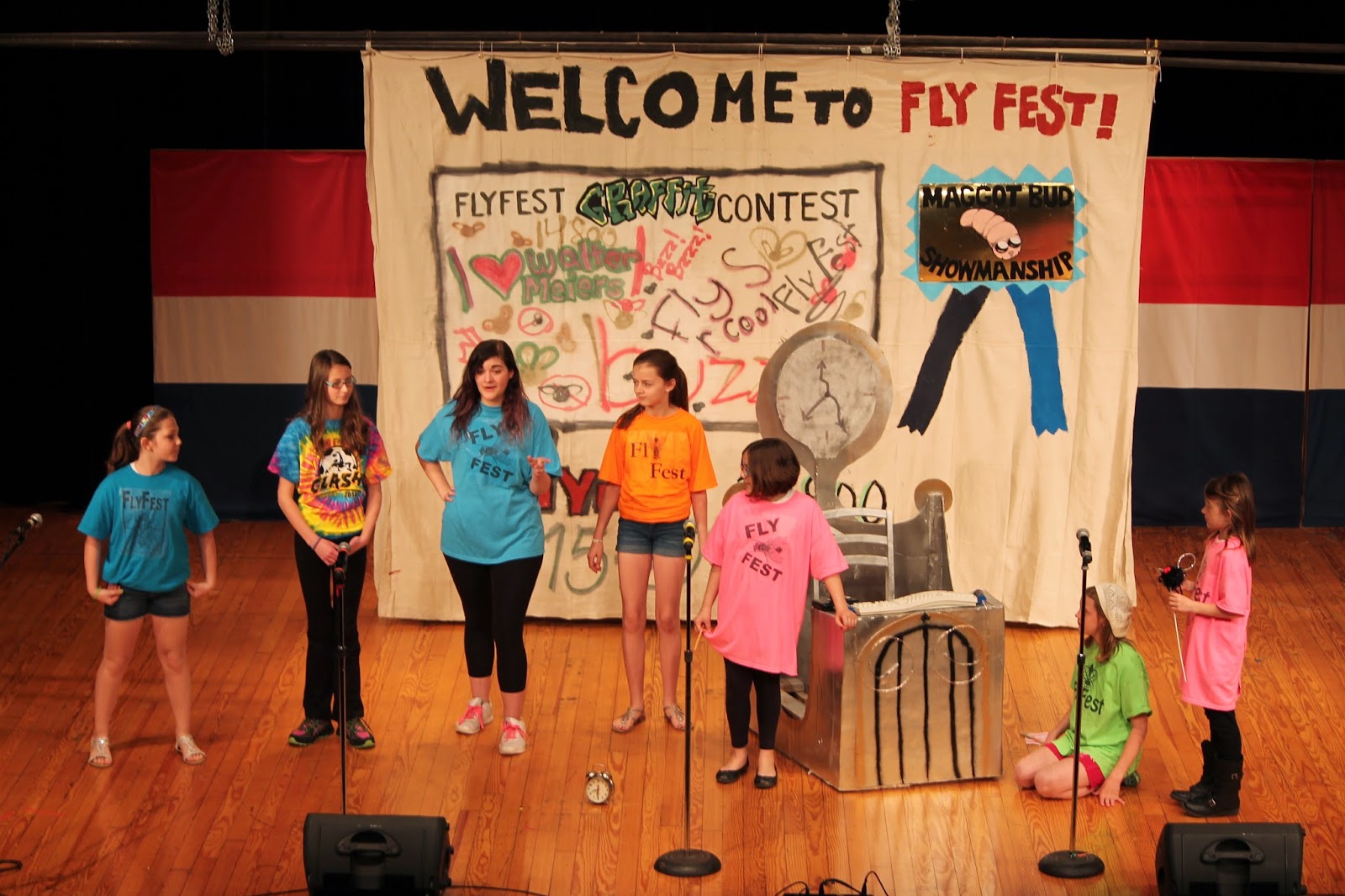 Soon the conversation turns to the difficulties of time travel and the dangers of making changes in the past that could erase the world as we know it!  This is something our heroine finds strangely appealing, however, and when it becomes clear that the time machine might actually work, she decides to take matters into her own hands. 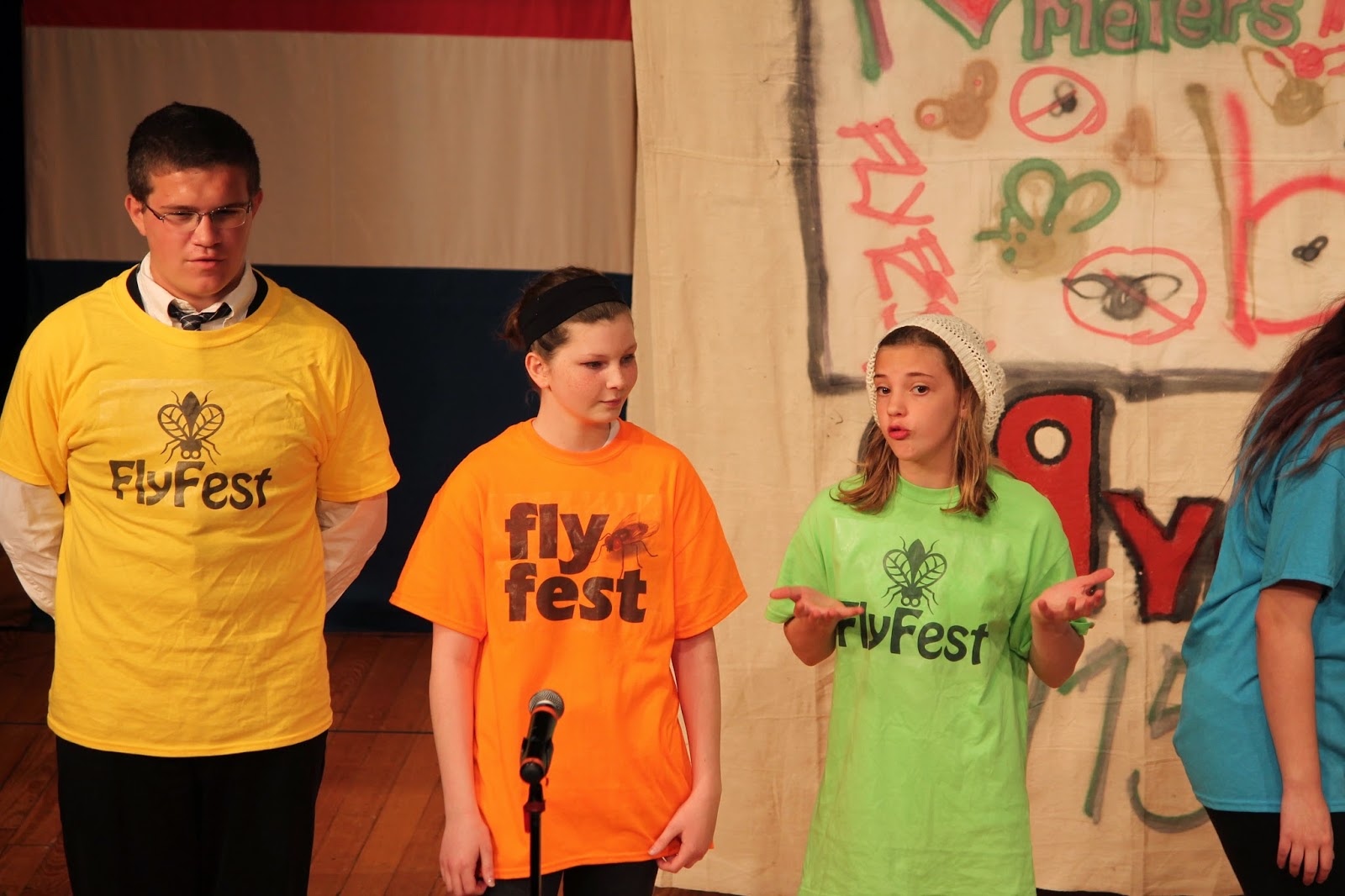 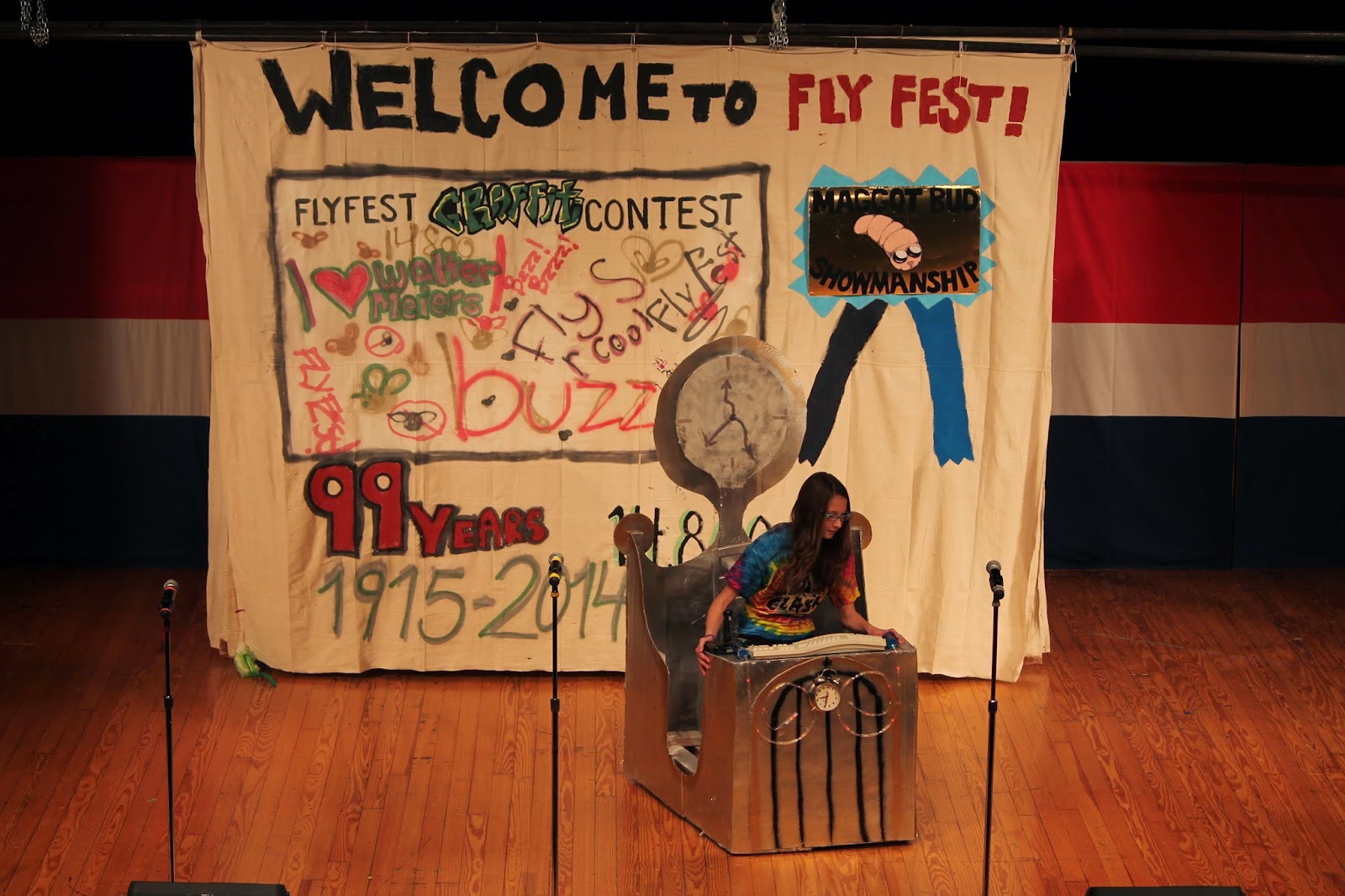 At this point there are all sorts of cues – theme songs from Doctor Who or The Twilight Zone, lighting special effects, and a changing of the backdrop as it flies up and out of sight.  And suddenly – BOOM! – 1914.

In a cornfield.  Because that’s what you get in 1914 if you’re not on the Western Front. 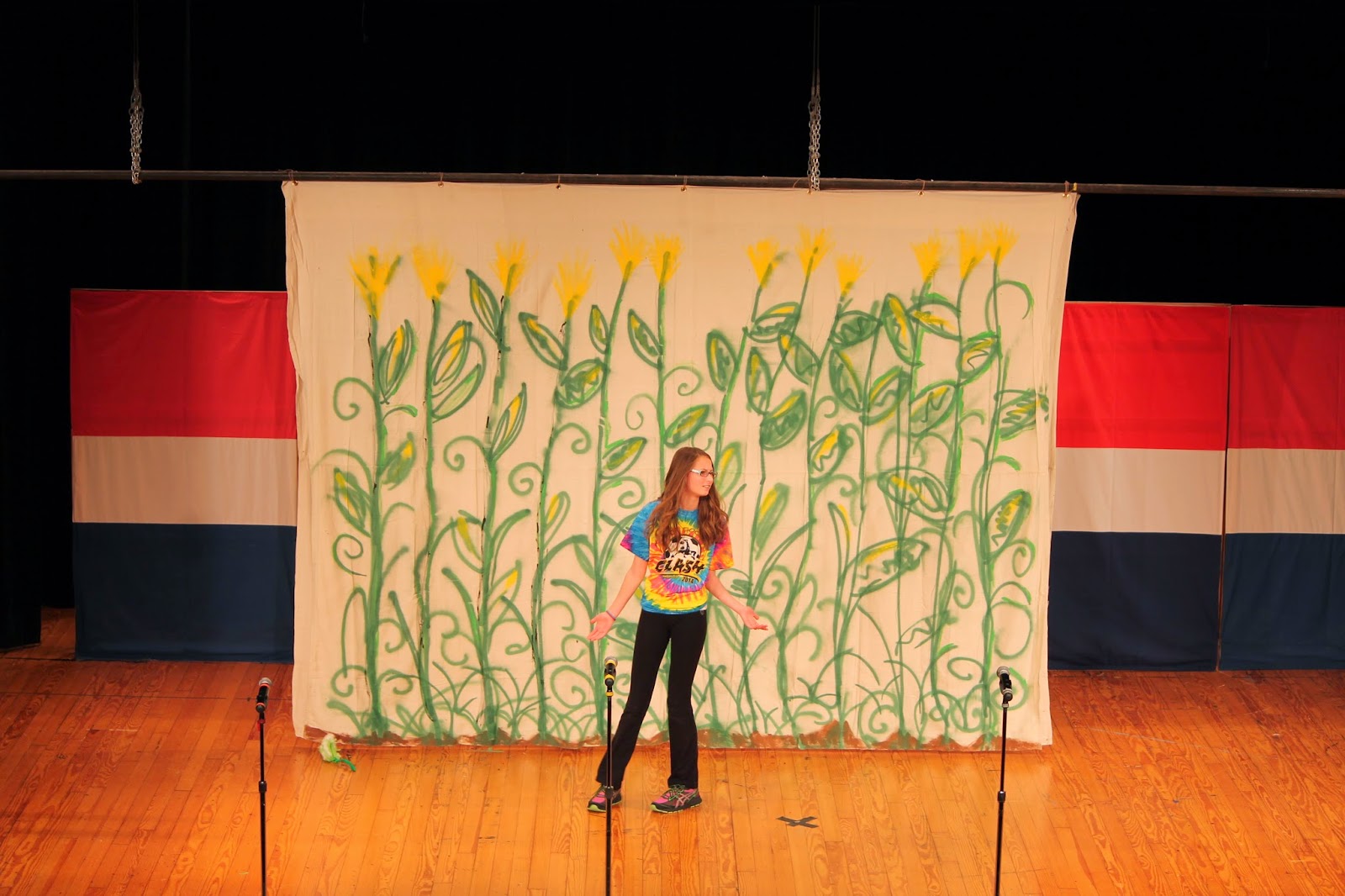 We meet the locals, who are preparing for the initial fly-catching event and talking about all the things they plan to do with their newfound money (“I’m going to buy marbles!  I lost mine…”) 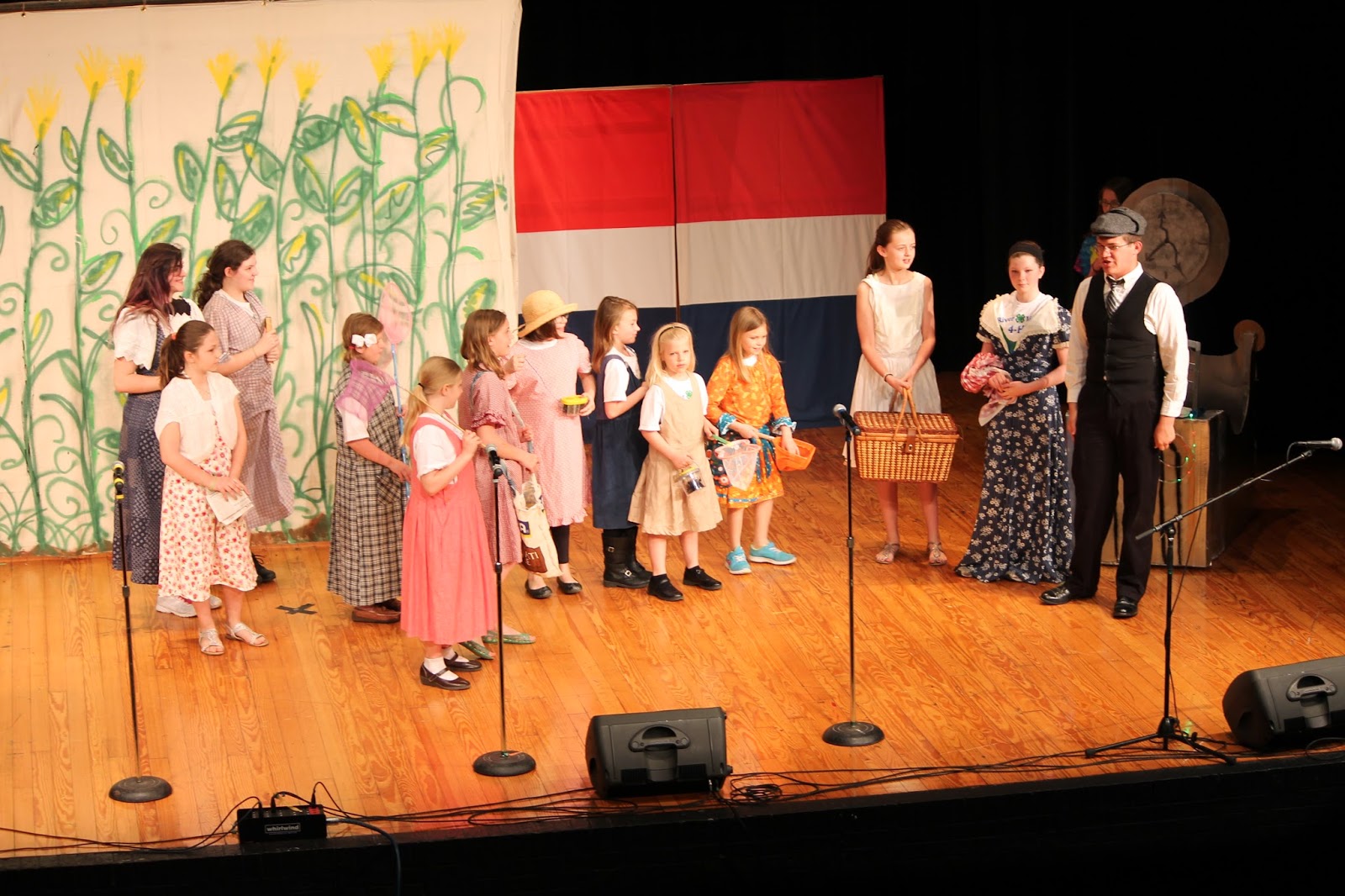 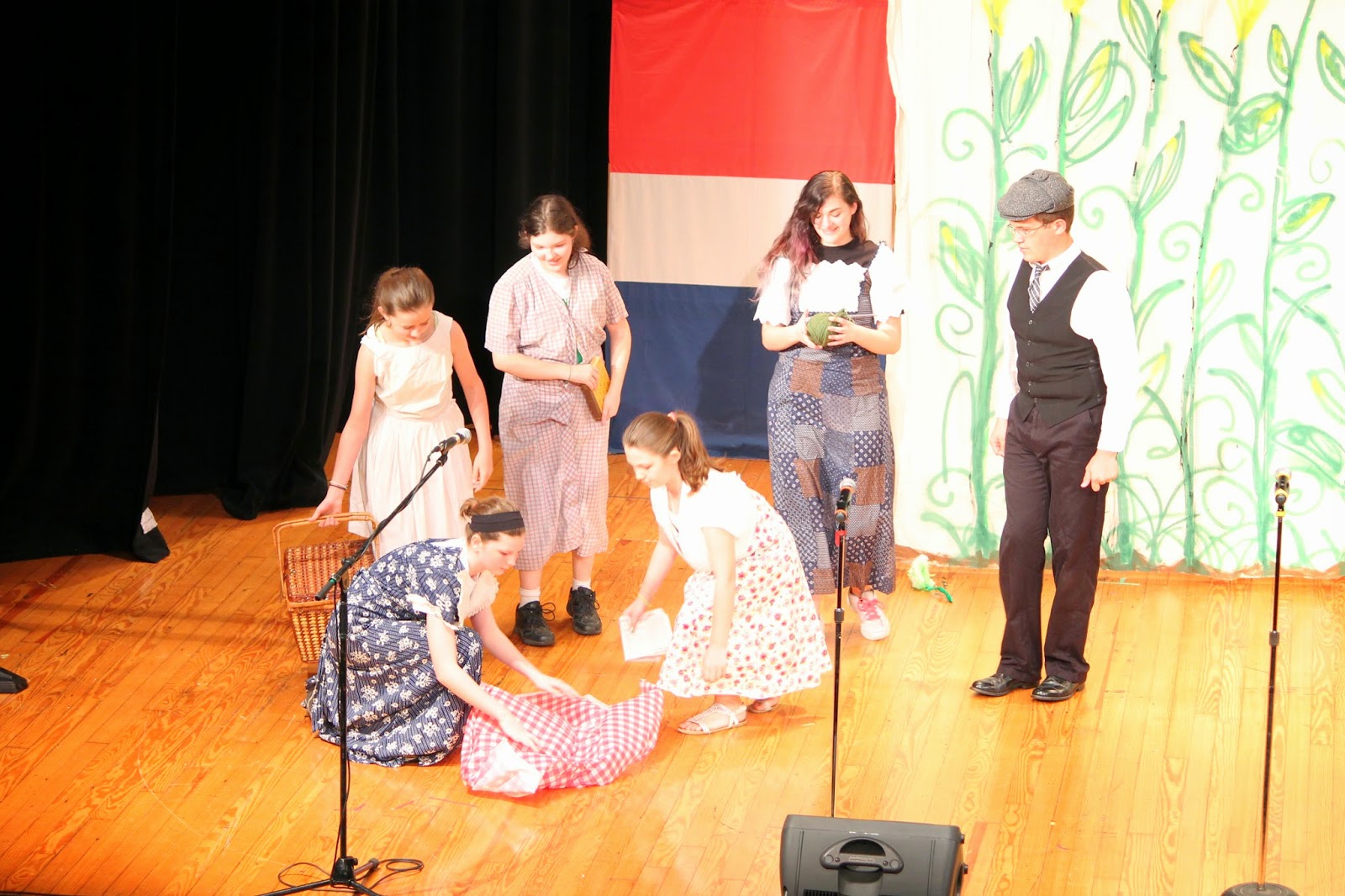 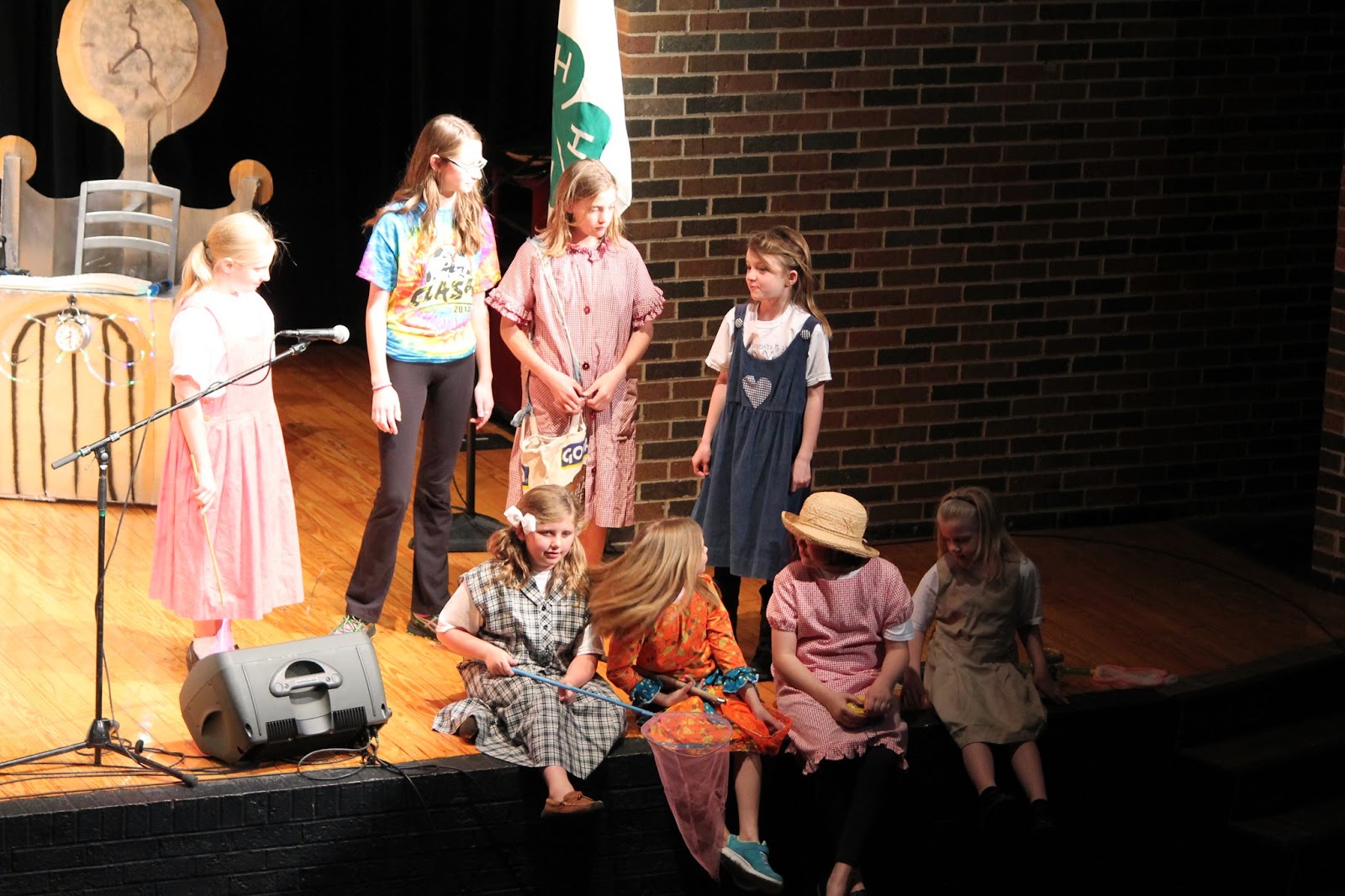 Our heroine is aghast!  What if things go on the way they actually did!  She will be stuck catching flies for her entire youth!  She shares this fear with her newfound friends – who, truth be told, are more worried about this stranger’s unusual interest in their great-grandchildren than they are about the long term consequences of fly-catching. But when she explains her idea for this great new club (4H, naturally), they become interested.

Mission accomplished, our heroine heads for home (accompanied by further appropriate tech cues), only to arrive at a rather different – and strangely familiar – place. 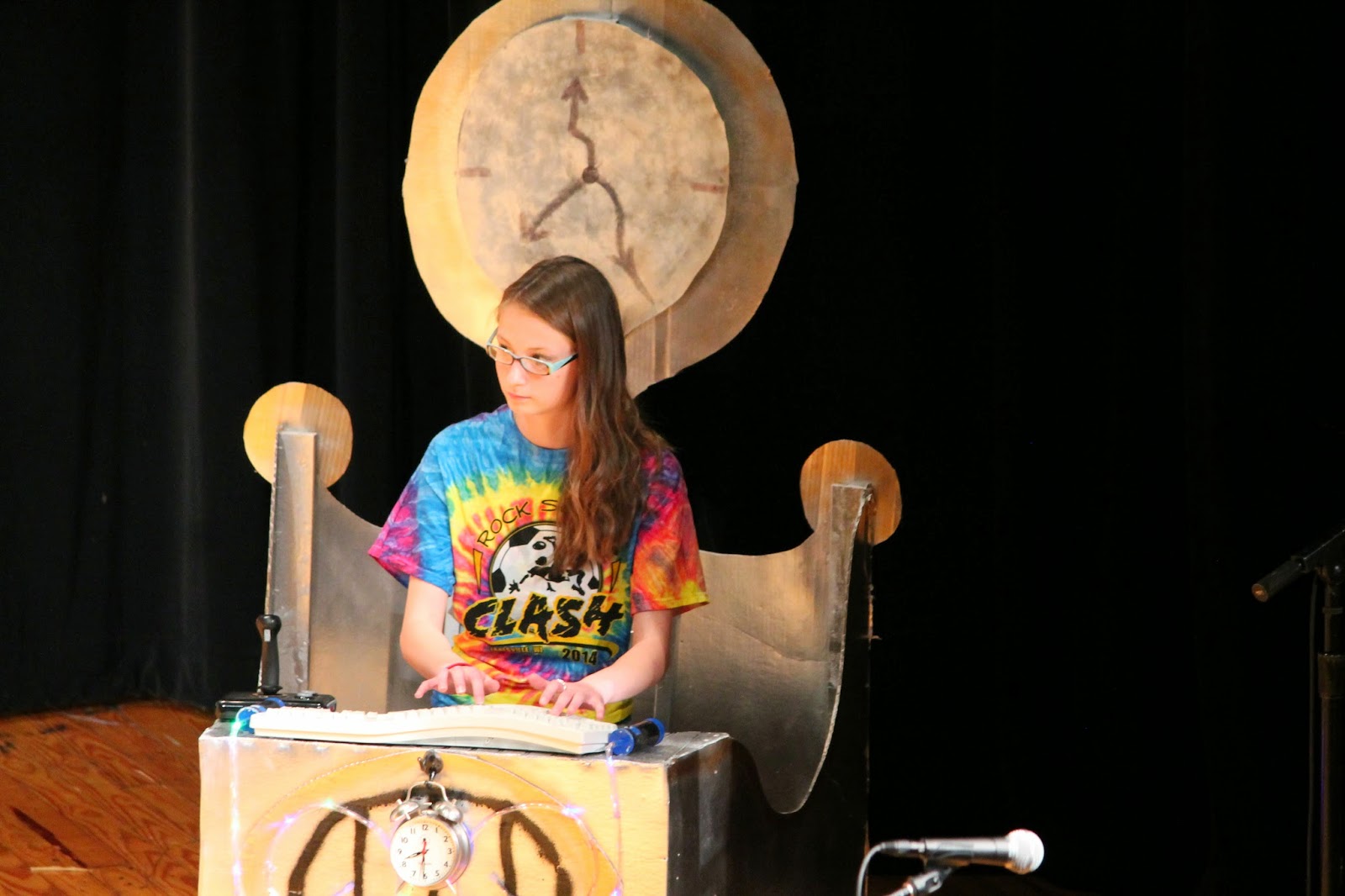 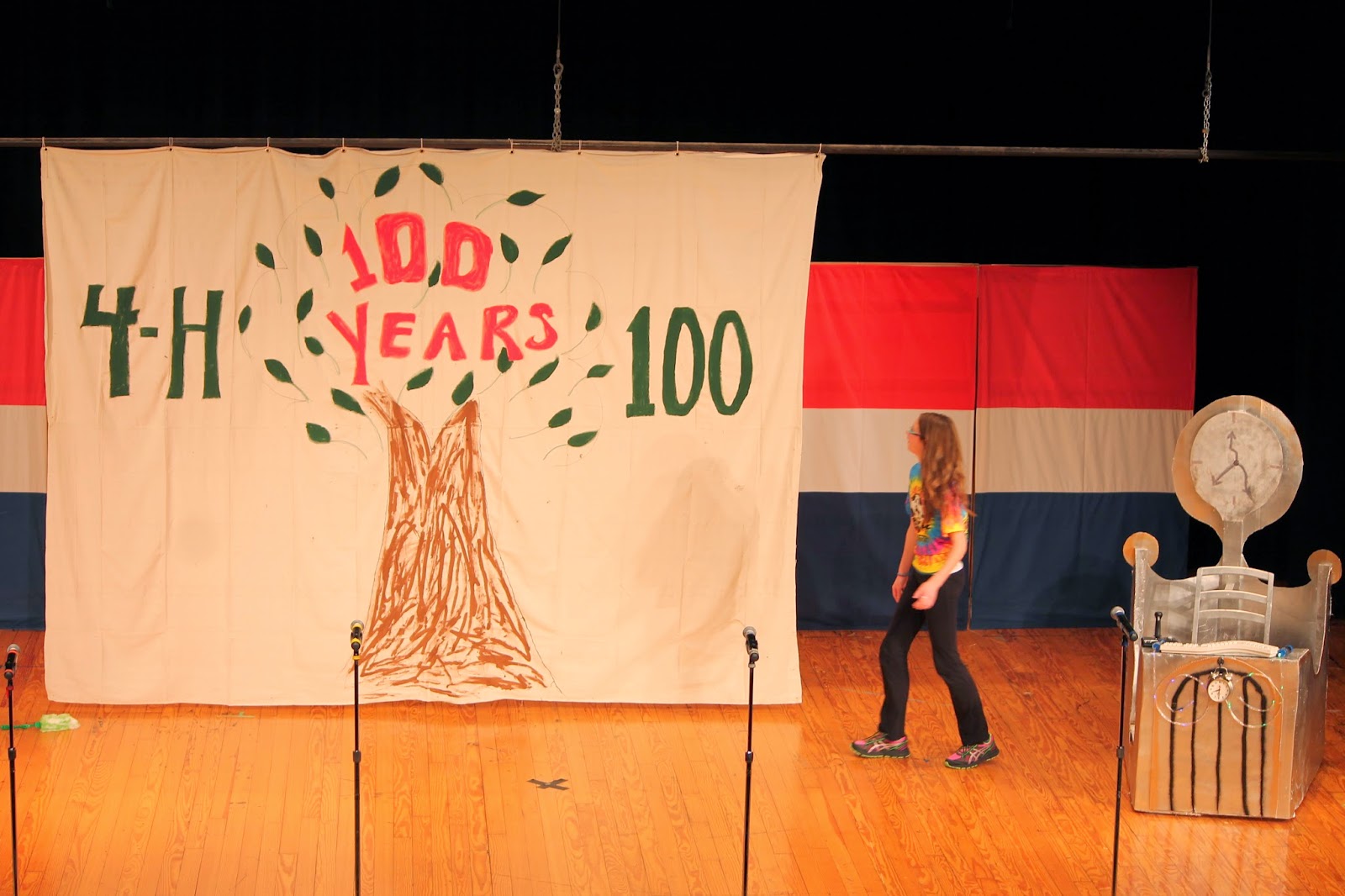 There she meets her friends, who have no idea what she’s blithering on about flies for, nor do they believe her when she says that 4H was her idea.  It’s been around for a century!  What are you talking about, crazy person? 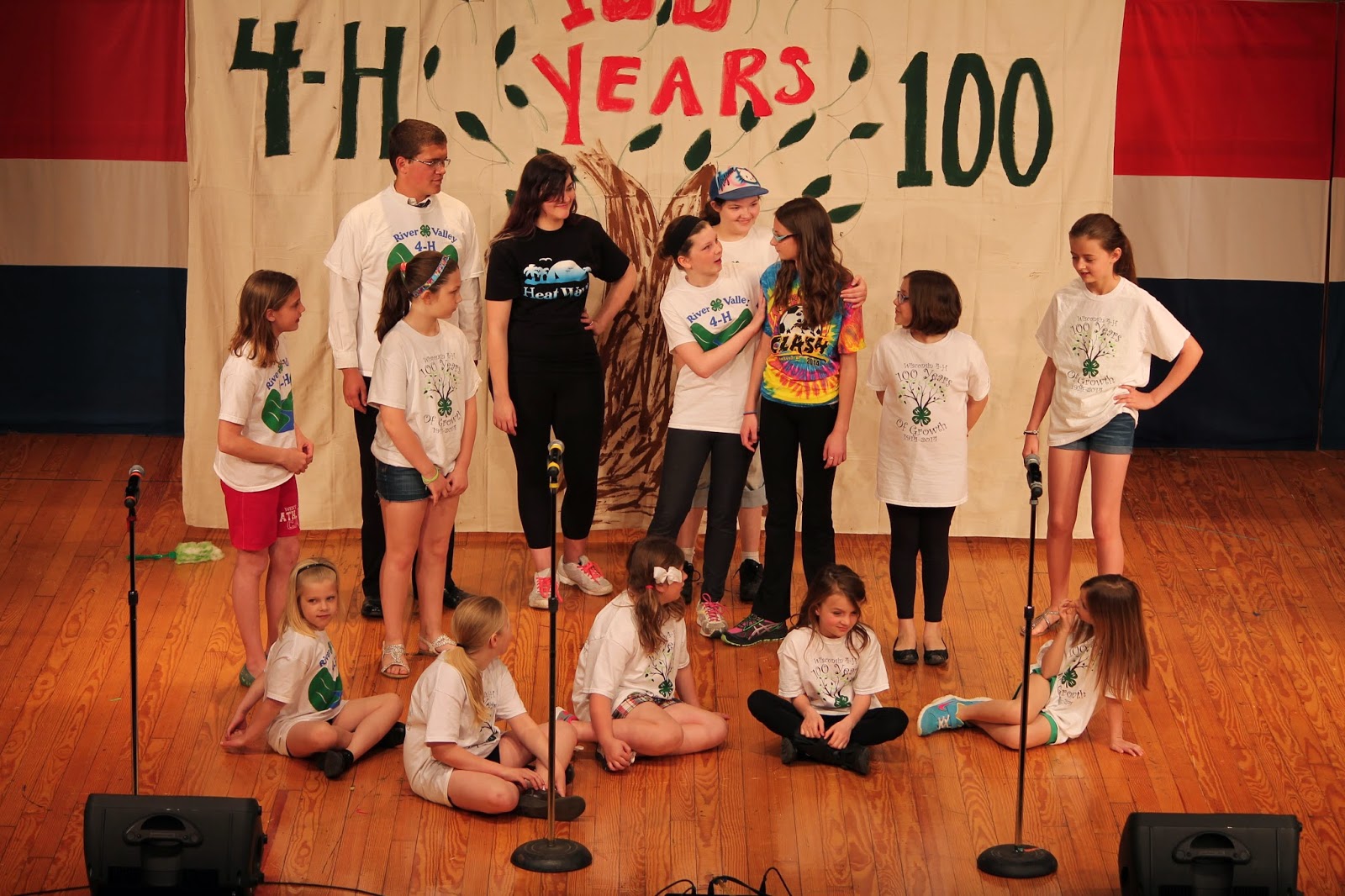 They head off for cream puffs, because that’s what we do in all of our plays, and then the narrator comes back on to talk about how things can change if you dream and have access to a working time machine.  Or maybe I’m just inserting that last bit on my own.  It seemed important in context. 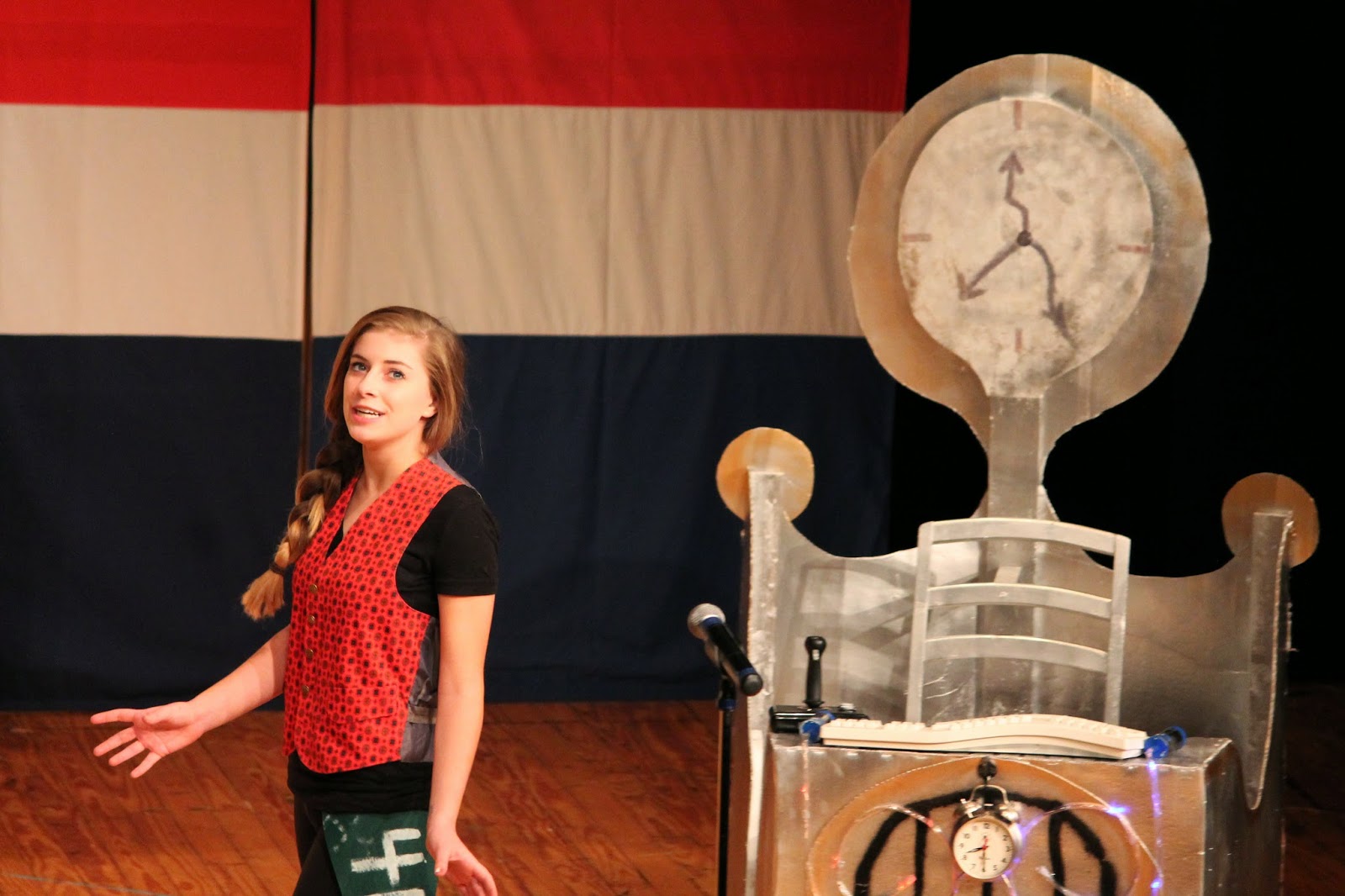 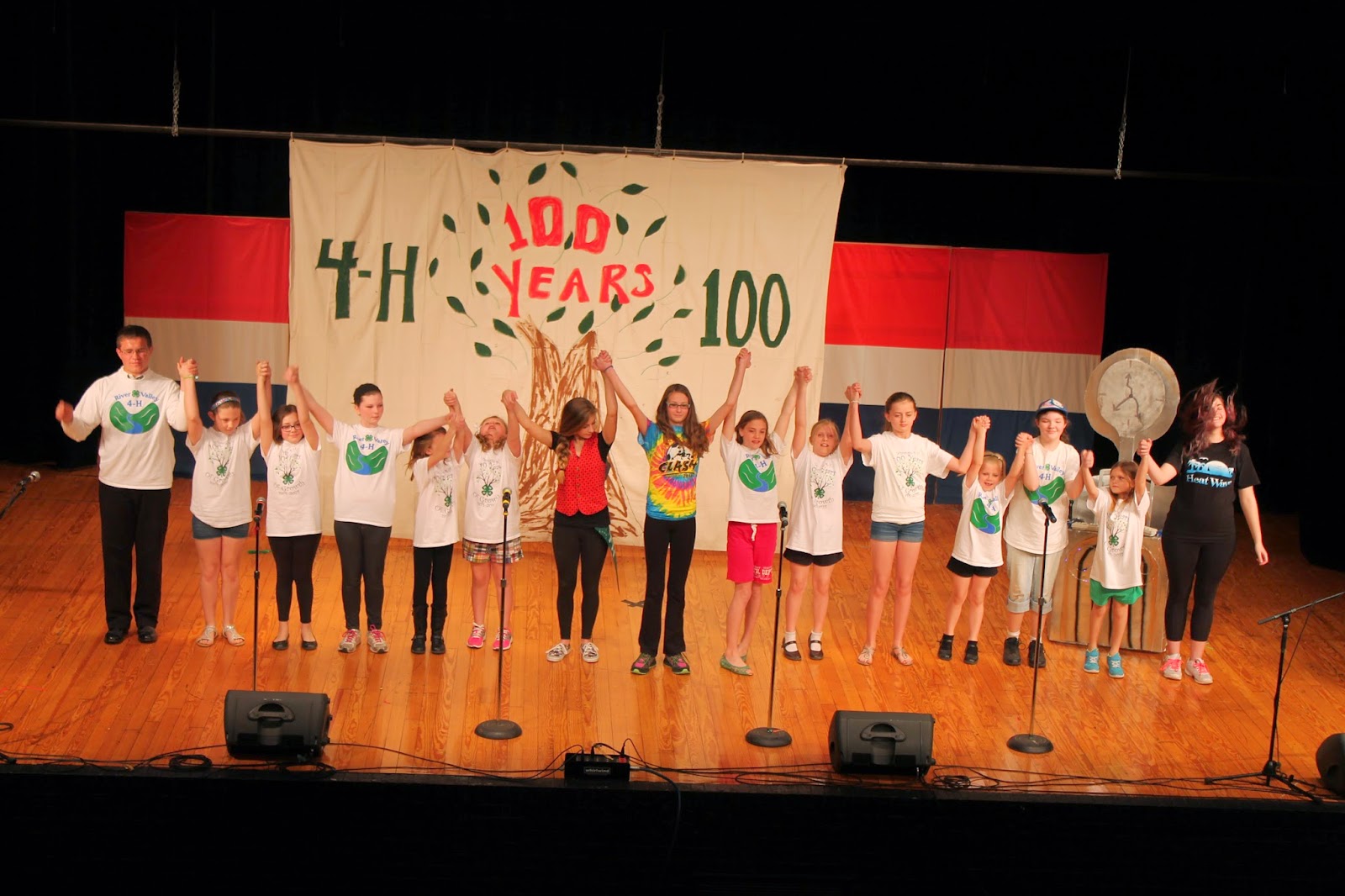 Then came the judging.  The judges were suitably impressed, and awarded the troupe blue ribbons in honor of their hard work, creativity, and talent.  The players and crew were immensely proud of their achievement, as well they should be. 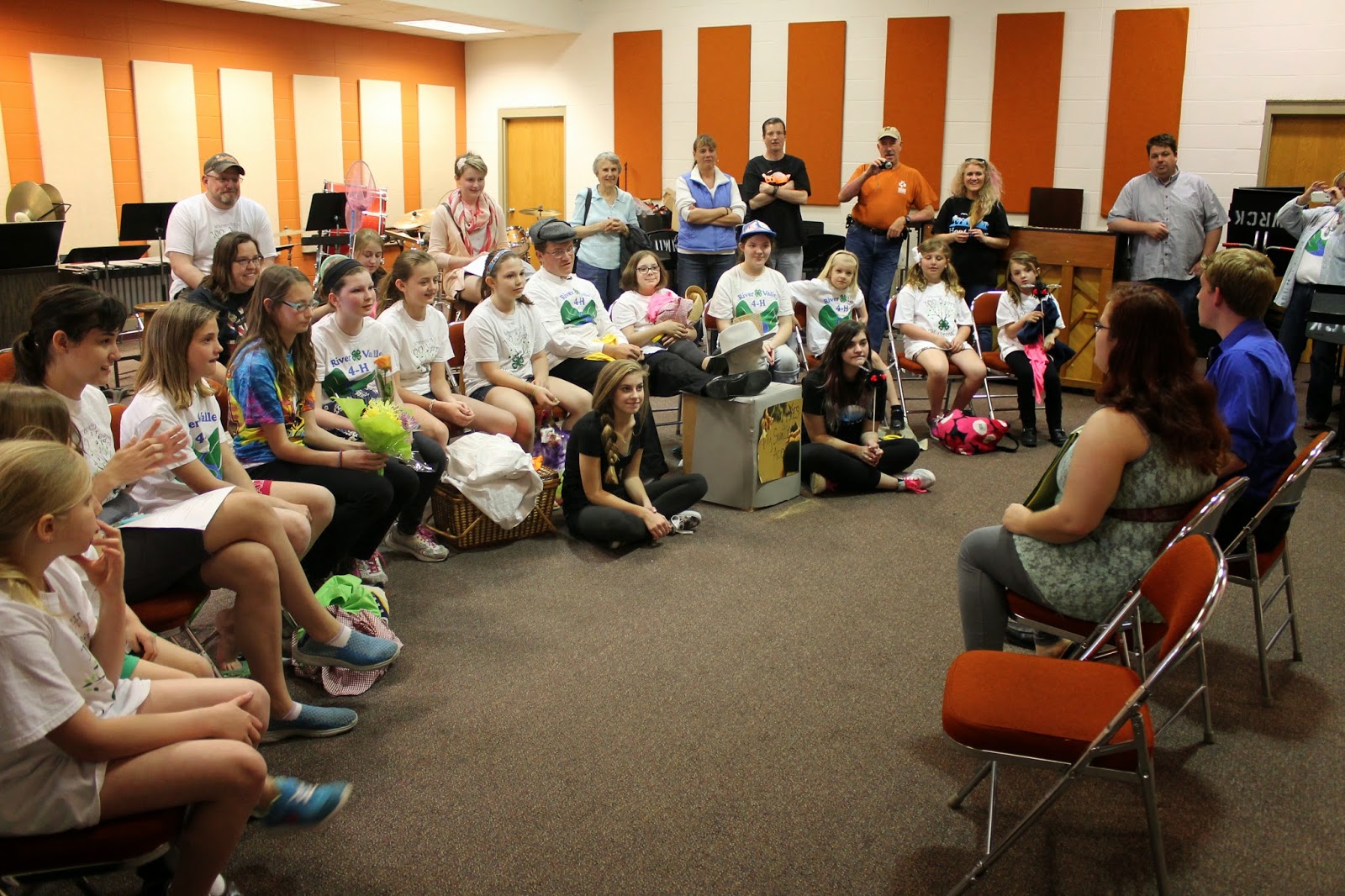 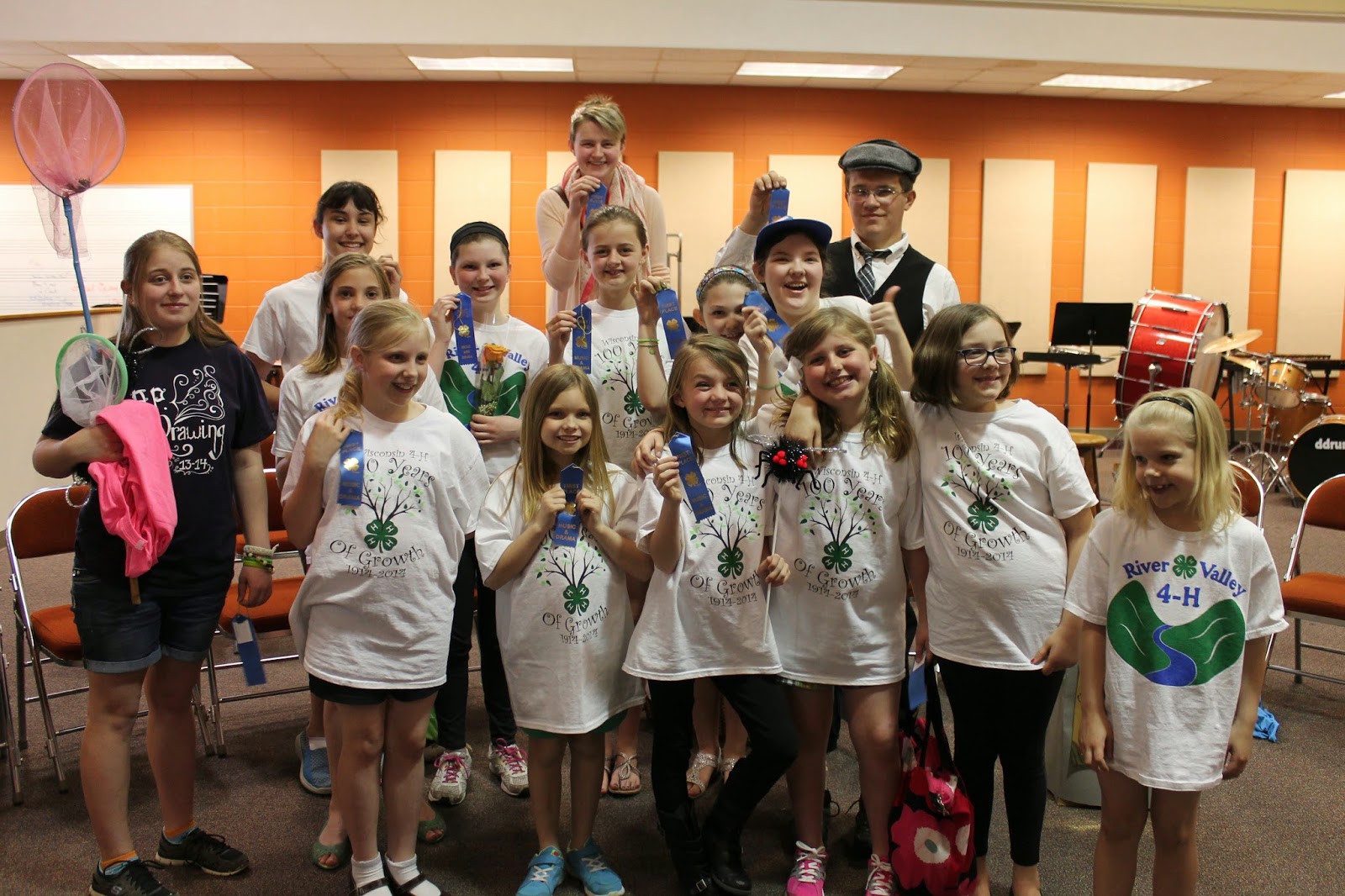 Most people went home at that point – it had been a long day after a long couple of months – but a few stuck around for the final award ceremony.  The 4H people had gotten a state representative to stay for the duration and he graciously handed out the medals and certificates for the grand awards.

In addition to certificates for Outstanding Cloverbud and Youth Director, our troupe won Best Lead Actress, Best Use of Props, Best Original Play, and Best Overall Production.  So, yeah us!

The oddly funny down side to this was that there was only one girl who had volunteered to go up and collect whatever awards we won, and she was kept very busy racing from the back of the auditorium to the stage every time our troupe was called.  She got to shake the representative’s hand so often it probably left marks on her palm.  But hey – small price to pay for glory, right?

All four of the remaining troupe members went up for the Best Overall Play award, as was fitting. 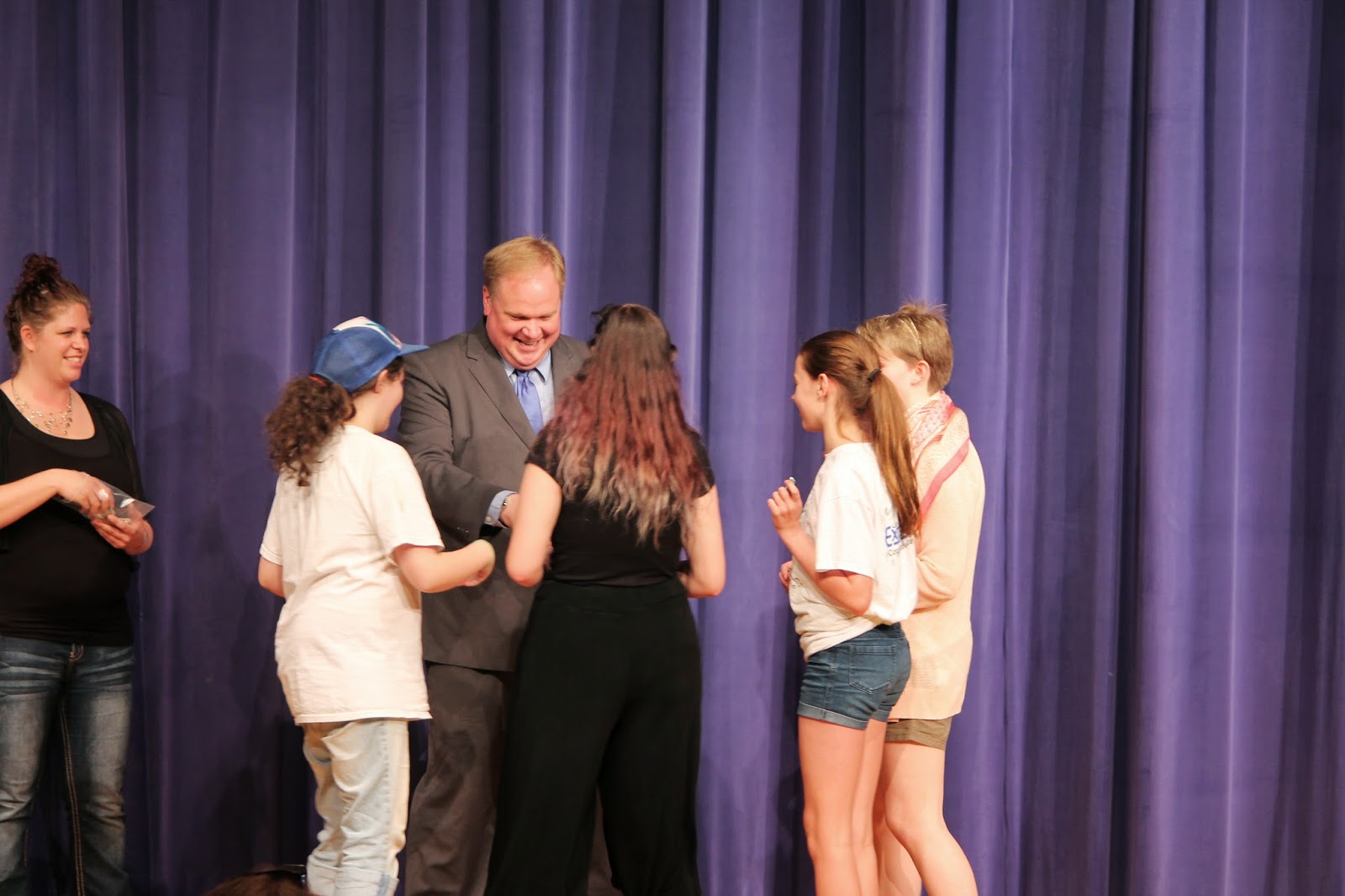 Congratulations, players and tech.  Well done, and well performed.
Posted by David at 11:53 AM