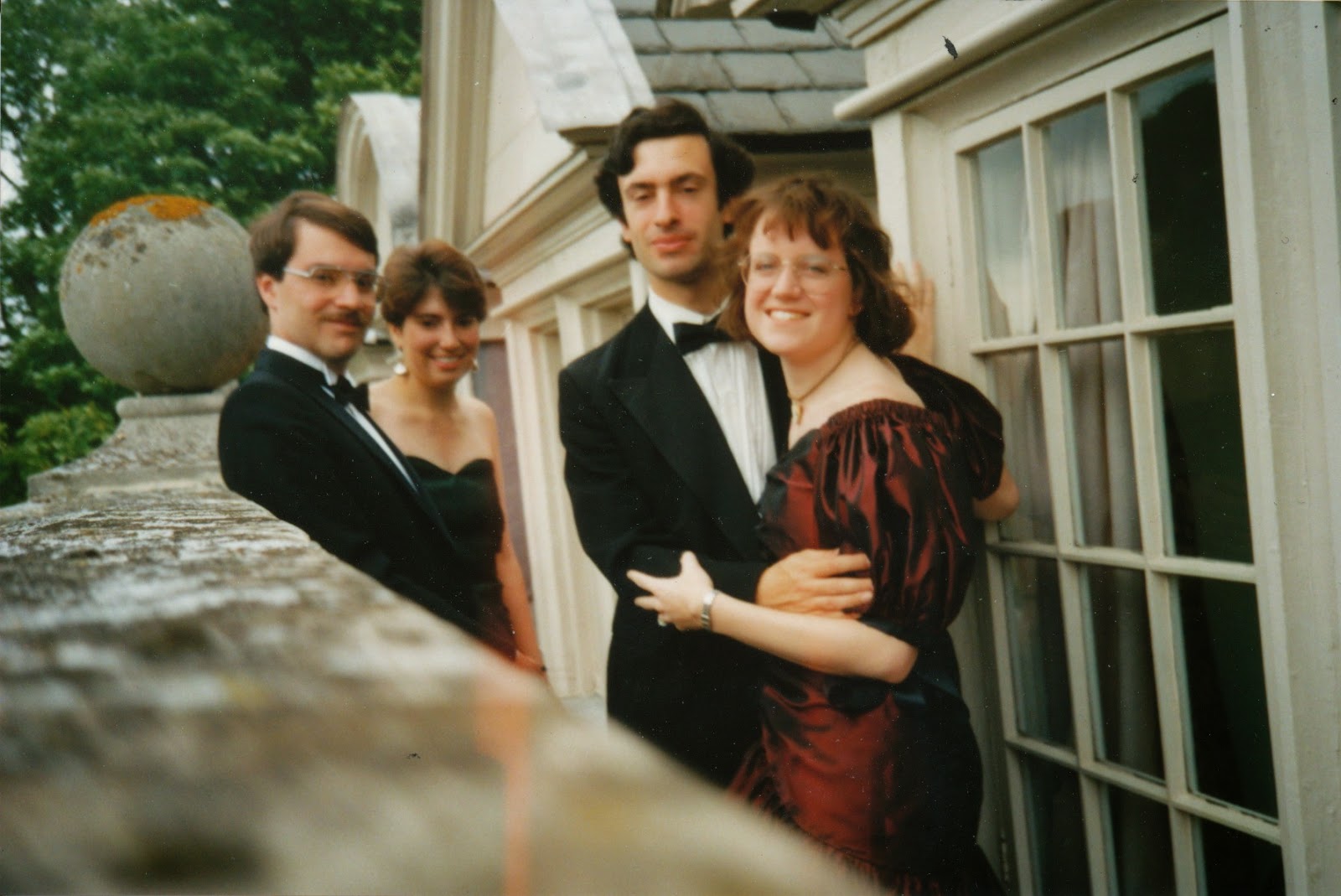 Some photographs are all about a moment.  Others, though, are the end of a long, complicated story.  This is one of the latter photographs, though the story involved is a happy one.  Most of those stories aren’t, for some reason, but sometimes you get lucky.

Julia and I have known each other for a long time now.  We went to neighboring high schools, and met when I took a day off from mine to walk around hers with my friend Matt.  We didn’t get to know each other well until later, though, through a different group of friends that was mostly centered around her church but had tentacles in several of the local high schools as well.  We dated briefly in the summer after our sophomore years, and when she moved several states away at the end of that summer we remained close friends.  We’ve been close friends now for over thirty years.

That’s her, on the far right.

The big takeaway from our personal history as far as this story goes is that we mostly knew each other outside of the context of our own high schools.  We didn’t know most of each other’s high school friends.  That becomes important later.

Fast forward most of a decade.  We’ve both graduated from college, and in our own separate ways headed off to graduate school.  I’m living in Pittsburgh, fighting my way through the first year of my MA in American history.  She is at Cambridge University, in England.

By this point her parents had moved back to the Philadelphia area, so when I went home for semester break we managed to get together for a bit and trade stories about our respective lives.  Keeping in touch was harder back then, kiddies, in that dark pre-internet era.  Clare College – the particular sub-institution at Cambridge where Julia was a student – didn’t even have telephones in the dorm rooms, as I had discovered much to my frustration a couple of years earlier when she had been an exchange student there.  Sometimes you have news to impart more quickly than the technology will allow, but that is a different story for another time.

As we caught up, it became clear that she was feeling rather down about her life at Cambridge.  She had just broken up with her latest boyfriend a few weeks earlier, and – looking down the road – she realized she had nobody to go to the May Ball with her.

The May Ball – which happens in June, for reasons that I was assured make sense to the English – is the big festival with which Cambridge University ends its academic year.  You get dressed up to the nines, go out to dinner, and then head on over to the specific college you are attending, where you stay until dawn.  There are entertainers.  There is a vast quantity of food.  You can even go punting up and down the Cam, which for my American readers does not involve kicking anything.  Think “Venetian gondoliers,” only without the singing.

Well, I thought, sign me up!  I’d never been to England before.  The May Ball sounded like fun.  I even owned a tuxedo at that point in my life, a requirement of the choir I had joined in Pittsburgh earlier that academic year.  And it would be nice to go visit Julia in her new home.  We’d have a ball!

So we made plans for me to fly over to the UK that spring – my first ever airplane flight, it turned out.  I ended up taking a tiny little puddle-jumper from Philadelphia to New York – one of those propeller-driven aircraft with one row of seats on each side of the aisle that make you think it needs a new suspension system because of the way you get bounced around up there until you realize that there is no suspension system unless you count the wings and that bouncing? well, that’s just how it flies – and it was a good thing I enjoyed the experience because I had six hours at JFK International Airport to think about it before getting on the trans-Atlantic flight, which was at least on a much bigger plane.

And that’s where things stood in mid-January when I got a letter from Julia outlining what she felt was a problem with our plans.

It seemed that she had found herself a new boyfriend – a very nice man named Richard, it turned out – and that this presented complications for our plan to attend the May Ball together.  But she also had a friend at Cambridge, another American, who would be happy to go with Richard, and then we could all hang out together.

This struck me as unnecessarily complicated.  So I wrote back and said, “Why don’t I just go with your friend and you can go with Richard?”  It was supposed to be a friendly good time, and I could certainly do that with her friend just as well as I could with Julia.

It turned out this was a fairly good plan for a couple of reasons.  For one thing, about six weeks later I got another letter from Julia announcing that she and Richard were now engaged (and wouldn’t that have made a rather awkward May Ball otherwise?).  They’ve been together ever since, and we’ve traded family visits between here and there a couple of times over the years.  So, win!

For another thing, Julia’s friend turned out to be Pam, whom I had been friends with in high school but had lost track of after we had both graduated.  I don’t believe Julia knew of this connection between Pam and me when she originally set this up – remember, we didn’t know each other’s high school friends beyond that one church group that she was in and that I had joined for a short while.  So I ended up traveling across the Atlantic to go to a May Ball in June with a different high school friend from the one I had originally planned to accompany.

Before the May Ball we went out onto the unofficial balcony at Clare and had someone take this photo.  I’m on the far left, with Pam in the green dress next to me.  That’s Richard with his arms around Julia.  It took months to set up this photograph, but there we are, about to head off to the May Ball, all sorted out.

What a great story. It looks like you were having a good time.