Now that I have turned in my grades, I have about a week and a half to get ready for my summer class.  I should be preparing for that, but naturally I have decided to take some of that time and get some things down here, because that’s just how I roll.

Looking back over the last few weeks of my life during this period of sparse blogging, it appears that there are several themes I could visit, some of them more likely than others.  Much of my time not spent frantically trying to keep my head above water at work has been spent on events that my children have participated in.  So today I will talk about running.  Tomorrow there will be music.

They always look to the side.

When I ran track, eons ago, the one useful thing that the coaches taught me – other than the fact that I was not cut out for a career in track – was that nothing that happened to my right or to my left was relevant.  The only thing I should focus on was the space in front of me.  That’s where the finish line was.  That’s where the next guy in the relay was waiting for the baton.  That’s where the divot on the track waiting to trip me up was.  The guys to the sides?  Nothing I could do about them.  Might as well ignore them.

If I could go around to all the elementary schools here in Our Little Town and give the 5th-graders one piece of advice for their track events, that would be it.  Look forward.  Never look around, and for the love of all that you hold dear, never look back.  It will catch up to you soon enough.

Yesterday was the Big 5th-Grade Track Meet here in Our Little Town, an annual event that takes place every May here, in all sorts of weather.  Including the similar 4th-Grade Track Meets, we’ve done four of these things now – two in what appeared to be late November and two in early July.  Yesterday was one of the July days – bright, clear, hot.  Everyone came home with a mild case of sunburn, since we’ve spent most of the last seven months huddled indoors trying to keep warm and there is always that period of adjustment once the sun comes out.

I dropped Lauren off at Not Bad President Elementary and headed over to the stadium where both of the local high schools play, over by the river, to claim my seat.  NBPE gets prime seats in the middle, right by the finish line for the 50-yard dash, and they fill up fast.  That’s actually a pretty nice problem to have.  It’s good to see the parents come out to support the kids.

Most of Lauren’s events were right up front, except for her last one, which was right at the end.  So we were there for the morning.

They called her right away for the long jump. 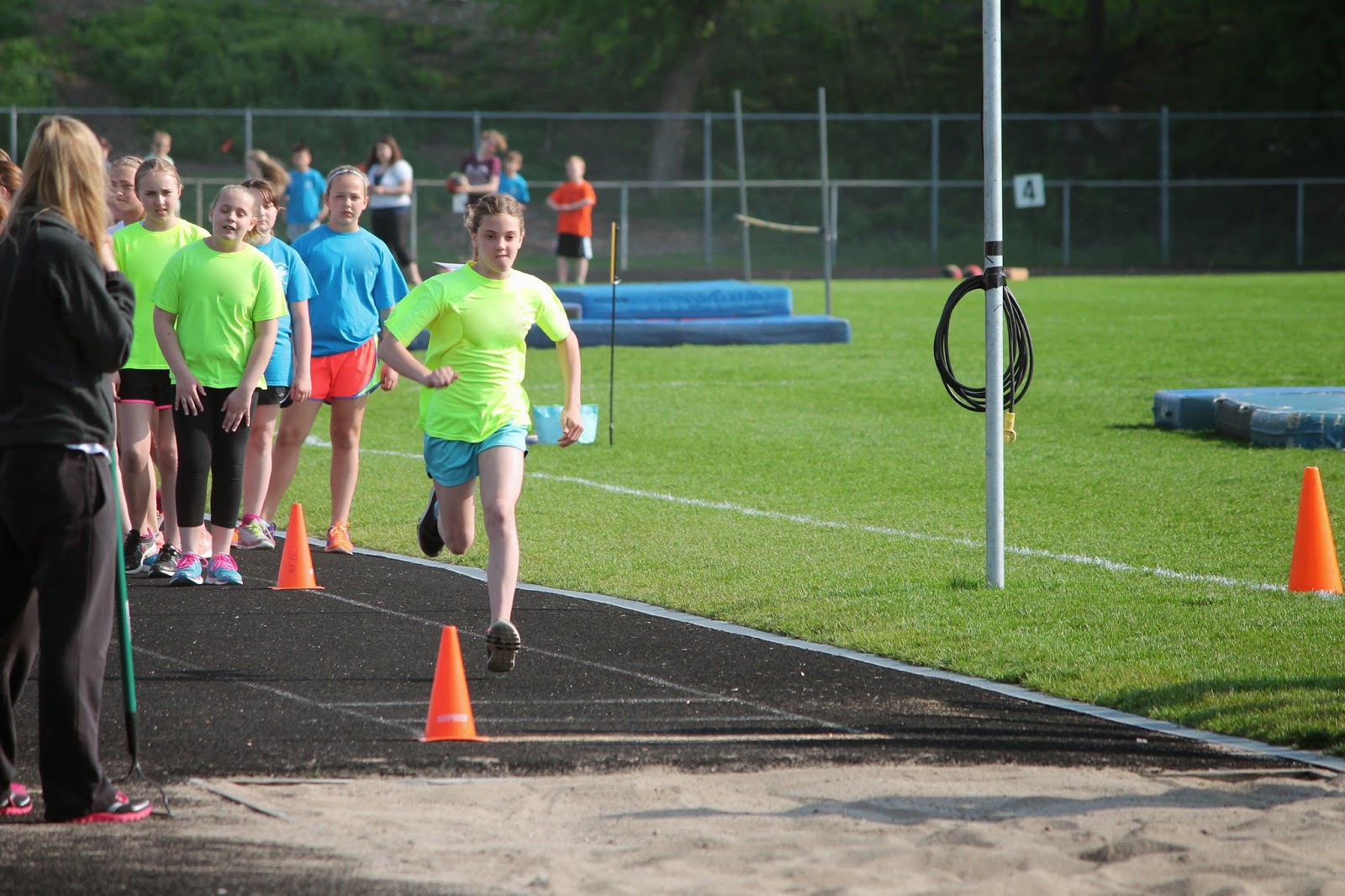 You get two tries at the long jump, and her first one didn’t go all that well, she told me later.  It’s hard to tell from the parental vantage point, way off in the stands.  But she reared back for her second try and let fly – and she ended up winning!  Go Lauren! 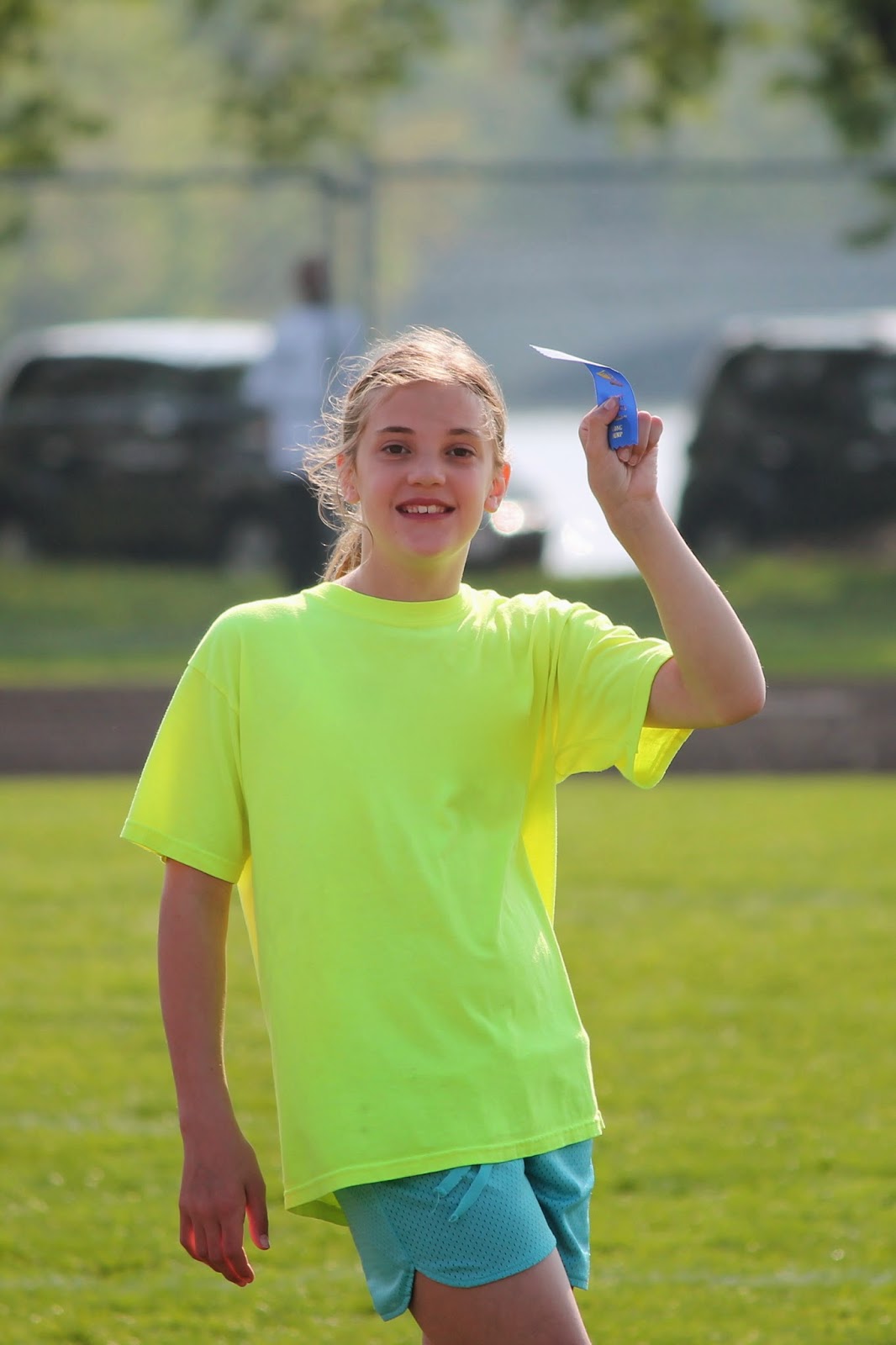 She immediately headed over to the 50-yard dash area, where she made the cut after her first heat and then came in third in the finals, which was also quite an achievement. 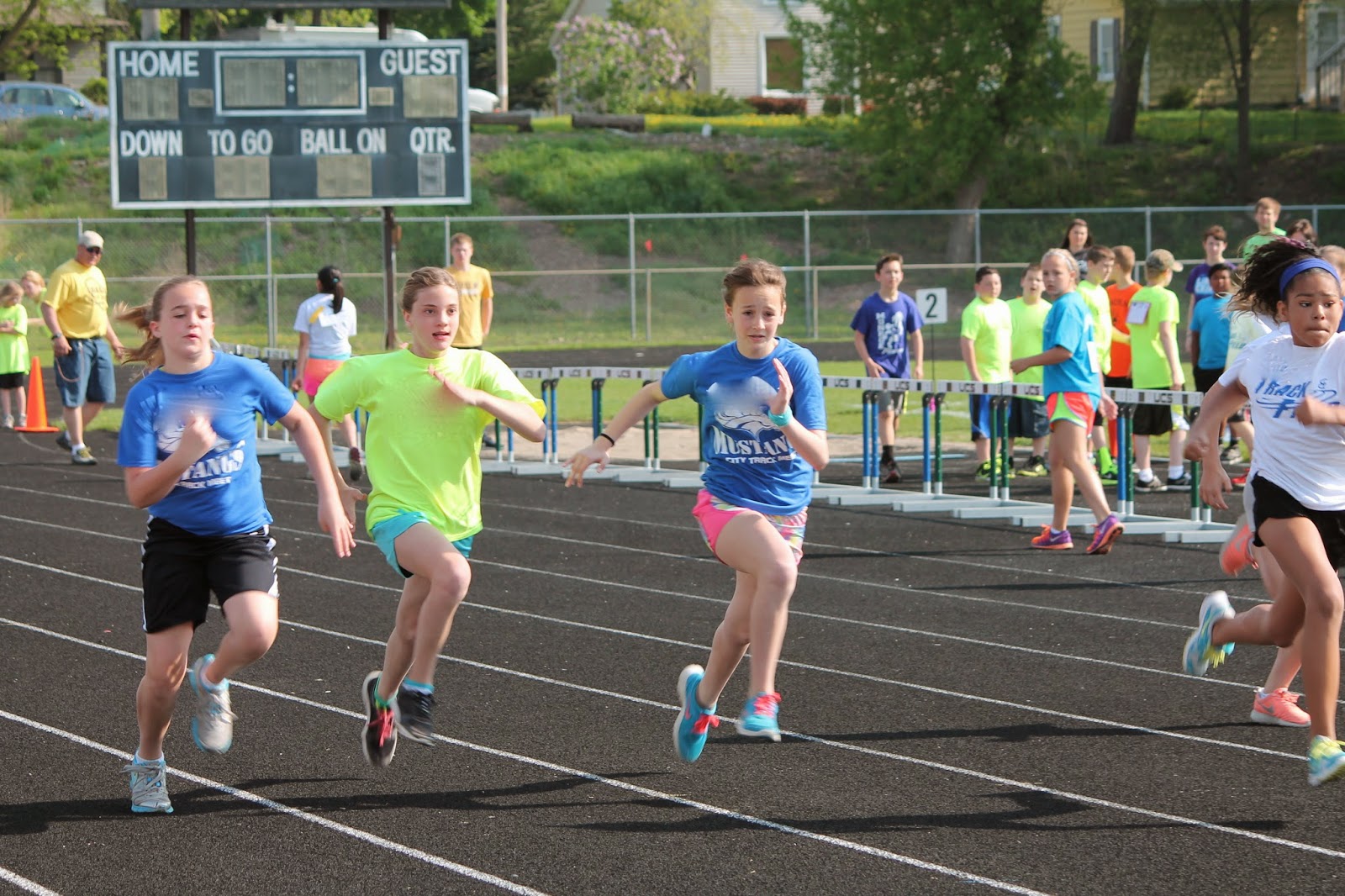 Then came the high jump, an event that I could never have done with all that launching yourself headfirst into the unknown.  Lauren loves the field events, though, and she won this one too! 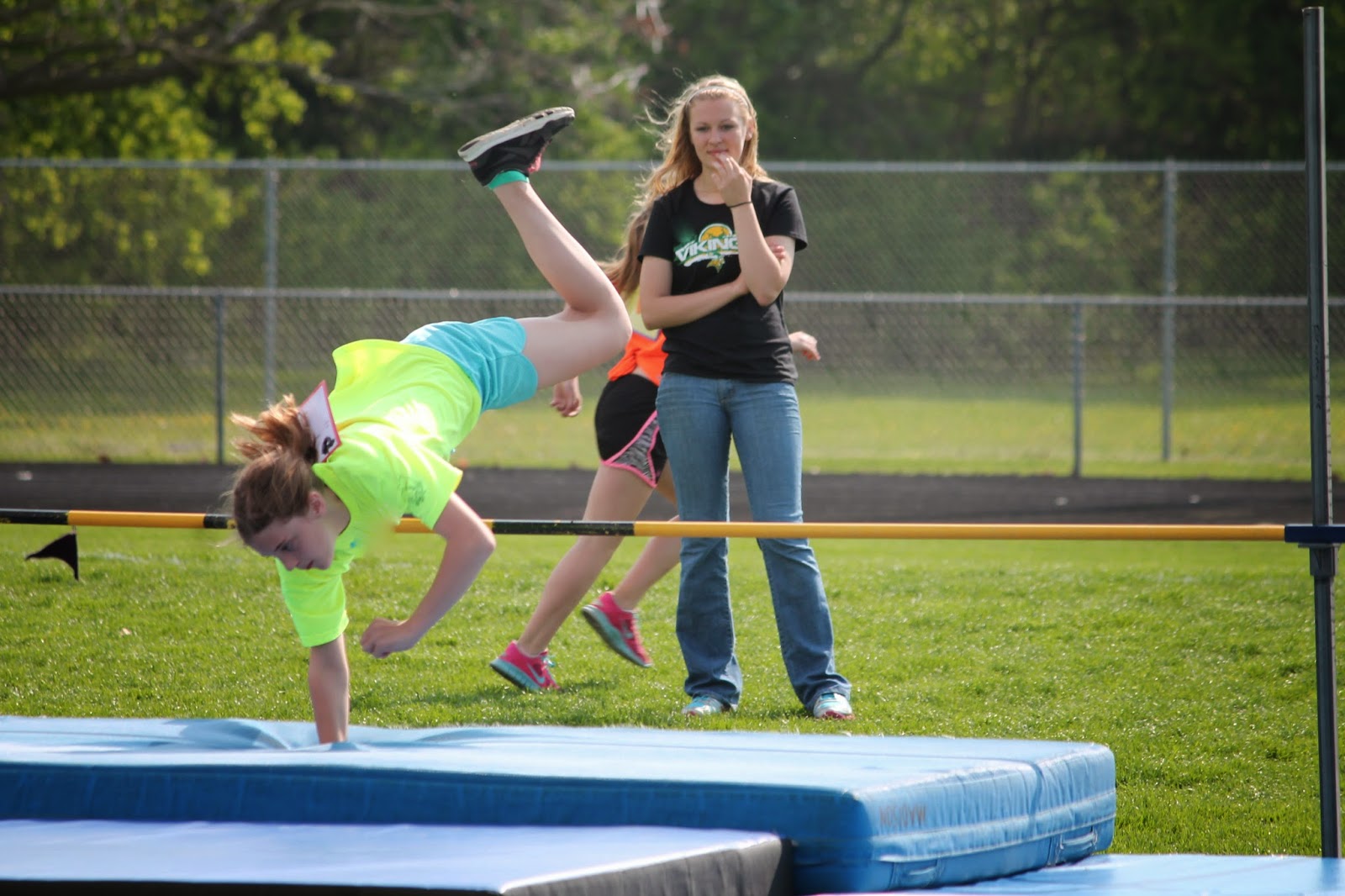 There followed a long, long break while the rest of the track meet unfolded before our slowly roasting eyes.  It’s quite an event, a track meet, if you’ve never been to one.  There’s always half a dozen things going on at once.  The announcer is a constant drone, directing athletes to their stations and announcing results as they come in.  The crowd gets up, walks around, talks at high volume, sits back down.  It’s a festival of motion.

Finally it came time for the 6x50 relays, the last event of the day.  I have always had a sneaking fondness for this event the way they run it here in Our Little Town, since it looks like the jailbreak scene from The Golden Compass except with fewer wolves.  They line the kids up on the infield of the track – half of them on the 50-yard line, half on the goal line, eight or ten teams across.  Then the starting gun goes off and what appears to be a riot breaks out.  But if you look closely, it’s slightly more organized than your average riot and nobody seems to be hitting anyone.  There are kids running for all they’re worth across the field to the other side, handing off the baton with greater or lesser degrees of success, and then new kids running the opposite way to repeat the process.

Lauren’s team made the cut to get into the final round, but a missed baton pass left them in 5th place overall, which is not bad for the day. 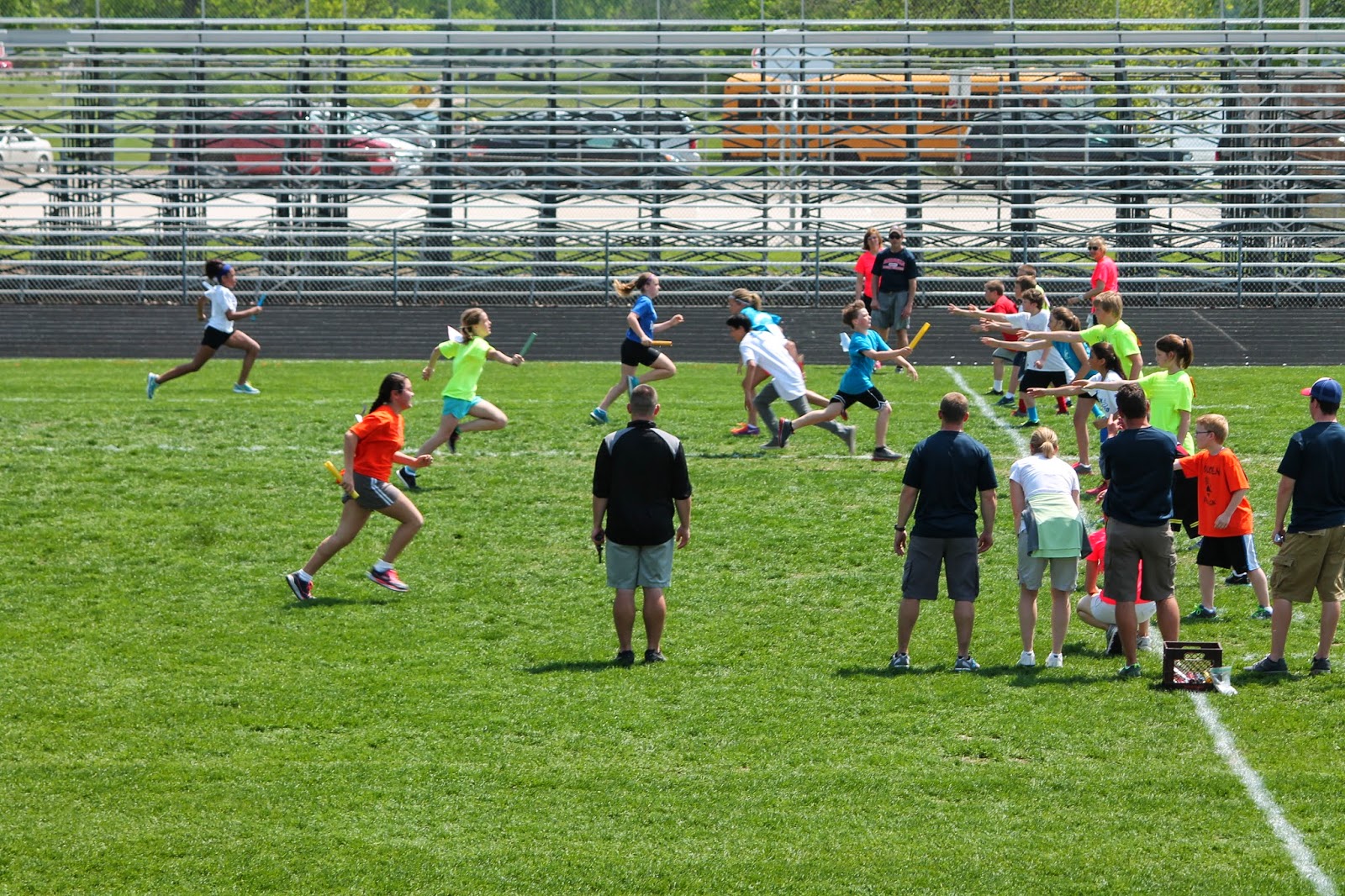 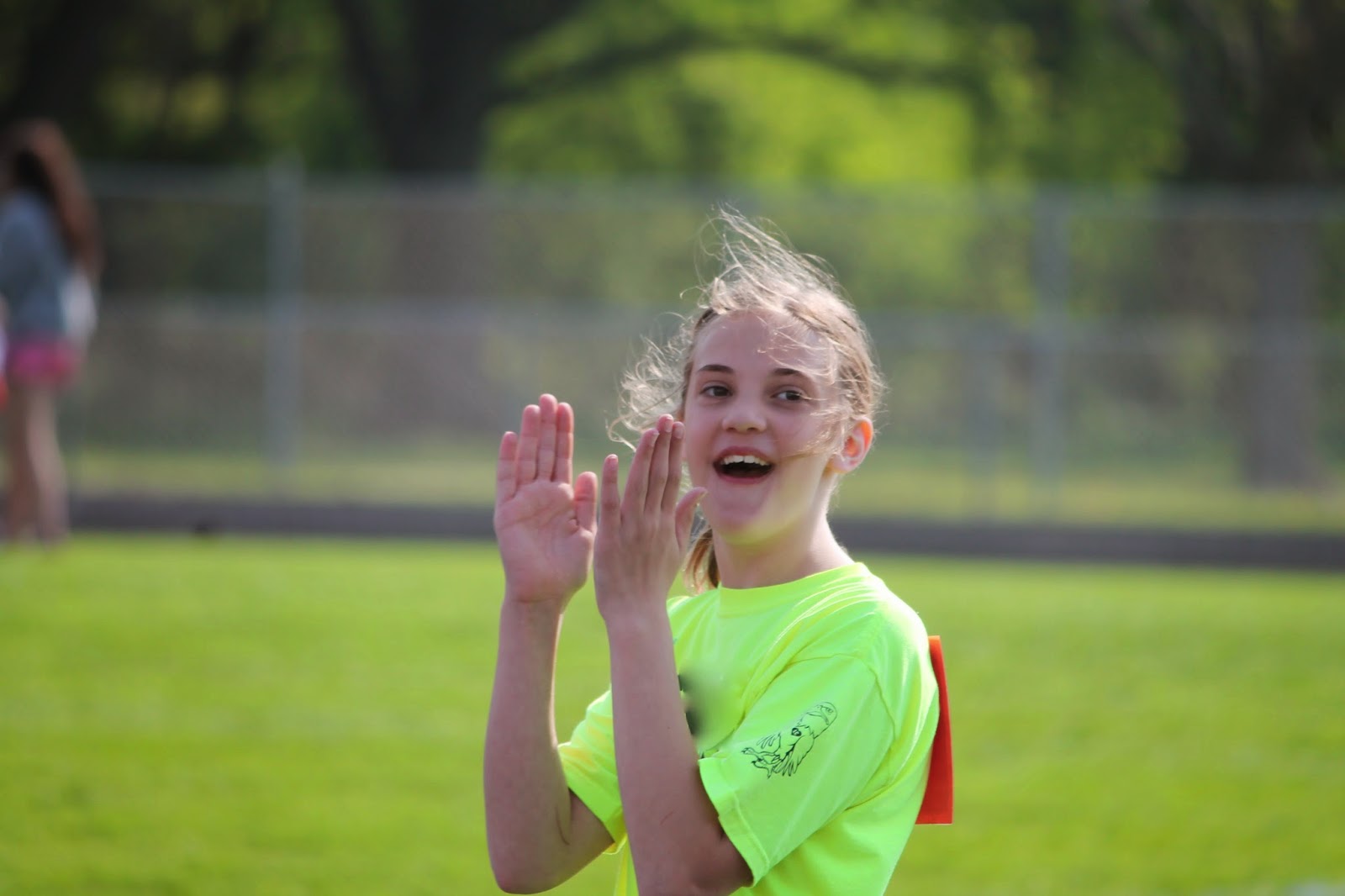