The lobby was the social hub of my old dorm.

Van Pelt College House managed to be both cosmopolitan and insular at the same time.  On the worldly side, we had more of a cross section of humanity under one roof than just about any other place I have been.  There were international students – 27 different countries among the 170 of us, at one year’s count – and students from all over the US.  There were students from a wide variety of races, sexual orientations, and athletic loyalties.  There were liberal arts students, engineers, scientists, and people who never did figure out why they were in college.  It was an eye-opening experience for someone who had been born, quite literally, half a mile to the east.

On the other side, we were way off on the corner of campus.  Nobody wandered through there by accident, the way they did in the Quad – if you were there it was because you had set out to be there.  And not many people did.

So we got to know each other quite well.

There was a lounge on the third floor that was mostly a quiet space, as I recall, though it got used for more than a few parties while I was there.  There was another lounge on the ground floor – a big long room that held our mailboxes and a piano, and that got a lot of foot traffic if for no other reason than you had to go through it to get to a lot of the rooms.  We’d have events there, such as the periodic talent shows or movie screenings that people scraped together.

But the lobby was where the action was.

There was a door facing Spruce Street and another opposite, facing the dorm across the way, and both led to the same lobby – a squarish room with a large L-shaped desk dominating the southwest corner and sofas strewn through the remainder of the space.  That was our only portal to the world, so everyone went through it a couple of times a day.

Working the desk was a lot of fun.  It was one of the work-study jobs I had while I was a student there.  Theoretically you had to check everyone’s ID when they came through, but since it was only us we never really bothered.  We knew each other.  And to be honest people got upset if you asked to see their ID after the first month or so.  Don’t you know me by now?

You were supposed to keep a log when you worked at the desk.  The housing office decreed that you were to record any packages received, any unusual events (there was a document that tried to define that, vague as it was), and so on.  There was a list.  They never did tell us how, precisely, to record all these things and we took that as something of a license to be creative.  At one point there were three separate running novels being written in the log, each one weaving in the required reports with a greater or lesser degree of grace and accuracy, until the housing folks got mad and took the log book away.  We missed it.  We used to gather around and read it for the pure entertainment of it.

We did a lot of things in that lobby for entertainment.

There were impromptu concerts on many nights, often with my roommate Jack on guitar and me on vocals, but at other times with others doing their thing.

There was hanging out, conversation, and general silliness, especially after about 2am, when the bars closed.  One night James, a fairly large guy who lived in the dorm and was known for being both overly generous with his cologne and generally on the conservative side, came rolling in after a hard night’s drinking only to find me and Jack, stone cold sober and with nothing better to do.  The long and the short of it was that we sent him to bed convinced that a) there was a talent show in the piano lounge at 9am the next morning, and b) he was in it, having volunteered to dance ballet in a tutu.  I don’t remember if he figured it out before or after waking up the next morning, as for sure as all neither Jack nor I were around at 9am the next morning to check.

Everything happened after dark in the lobby, really.  The night shift was the time to be down there – during the day it was just another lobby.  But after about 10pm or so, it was our world.  People would drift in, and by midnight or so it was hopping.  By 3 or 4am it began winding down, and by the time the sun came up it was back to being just another lobby.

If you came by after midnight, your odds of finding at least three of the people in this photo were pretty good.  There were a few others of the Late Night Lobby Club missing from this photo (somebody had to take it, after all), but this is a pretty good sample. 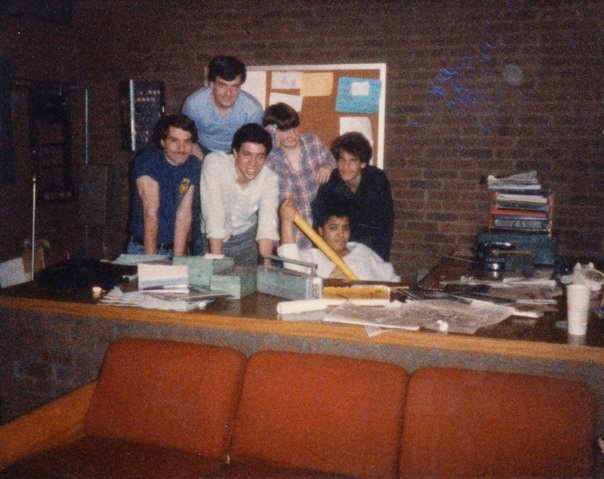 That’s me on the far left.

Above me is Terence, and the guy in the white shirt is Scott.  Scott once became completely nocturnal for an entire semester, though the expedient of waking up in time to take his night classes and then hanging out in the lobby until the sun rose.  Billy-Bob’s, the greasy-spoon restaurant kitty-corner across the street, and Allegro's, the pizza place directly across, were open all night and you can do that when you’re 20.  That’s Tiz in the plaid shirt and Andy in the black one, and seated at the desk is Karen, one of the few genuinely larger-than-life people I’ve had the pleasure to know.

It’s probably about 3am in this picture.  The evening’s festivities are starting to ebb, though there will still be folks around for a couple of hours yet.  We’re not thinking about the morning to come, when classes will start up again and reality will once again rule.  The night is still rolling on.  There are still people about, stories to tell, stories to create.

Tutu?
Is this the same man who grouched in the April 1st blog entry?