Back to School, Part II

Today was the first actual day of school down at Mighty Clever Guy Middle School, and things were hopping here at the family mansion.

We’ve been slowly easing into this transition for a while now.

The good folks at Not Bad President Elementary had a number of programs and field trips designed to introduce middle school to the graduating fifth-graders. There was an orientation evening sometime in May that I wrote about beforein this space. And we’ve been in and out of the MCGMS building several times this week trying to get caught up on all the things we missed while we were away. So it’s getting to be old hat, except not really. It’s not real until game time.

Yesterday, while Lauren was exploring the wonders of third grade, Tabitha and I went in for our Parent/Student/Teacher guidance session. We got there a little early so we could buy an MCGMS t-shirt, approved for gym class wear (a new idea, this whole “gym clothes” thing), and then found the meeting site deep in the rabbit warren that is MCGMS, where everything goes by a code. Tabitha is in the E-1 pod, and I did my best not to think of Stanley Kubrick. You find your way there by following the timeline painted along the wall, just under the ceiling. The E-1 pod is right around 14,000 BCE, which – I have discovered while researching my World History Class – was not a particularly active time. So there will be rest, and that’s good. The conference went well – we learned a great deal, signed a few forms, and had Tabitha practice her locker combination a couple of times.

We went back later to pour the bucket of back-to-school stuff into said locker, so Tabitha didn’t have to haul it in on Tuesday. It is a very spacious locker. And now it is nicely decorated as well.

Last night we went out for our traditional First Day of School celebration, wherein the girls get to choose a restaurant. This year they chose the Japanese-style hibachi grill place, and my aren’t we glad they’re getting older. They love the show – the chef comes out and grills it all right in front of you, and there is a great deal of carnival barking and wowing the rubes and it’s just fun to go along with it. And the food, while probably the Japanese equivalent of Taco Bell in terms of authenticity, is quite tasty. We had a good and filling time.

But this morning came fast and hard, and suddenly it was game time. No more meetings. No more practices. No more delays. 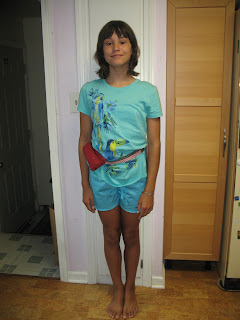 We piled into the cars and drove down to MCGMS, where we parked and gave Tabitha a hug for her first day of middle school. And then she ran across the street and into the next phase of her life.

OK, I'll be trite but it's true. She's getting TALL. Put a phone book on that young lady before it's too late!