Back to School, Part I

Due to the staggered start that Our Little Town has for its schools this year, Tabitha did not have to go to Mighty Clever Guy Middle School today. Which of course meant that Lauren got to have her first day of 3rd grade down at Not Bad President Elementary all to herself.

She was very excited.

We got home from vacation Tuesday afternoon (more on that later) and spent most of yesterday going through the end-of-summer whiplash that naturally occurs when the interval between summer vacation and the first day of school is less than 48 hours. We went to both MCGMS and NBPE to take care of all the paperwork that was supposed to have been accomplished in a small window of time while we were away, dropped off a bucket of supplies for Lauren, took home a similar bucket meant for Tabitha (which, apparently, she will not need until Tuesday), made an appointment for Tabitha for this afternoon with her guidance counselor, presumably for some guidance, and generally got ourselves as ready for this as we were ever going to be.

Last night it was hard for poor Lauren to get to sleep. It is always hard on the night before the first day of school. But there she was, bright and early this morning, ready to go. 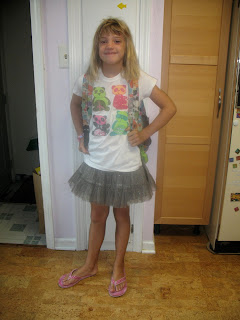 She had picked out her outfit weeks ago (there was also supposed to be a new army-style jacket to go with it – who knew it would be 95 degrees on the first day of September?), wolfed down her breakfast and insisted we get to school fifteen minutes early.

She even graciously permitted me to walk with her to the 3rd-grade door, where her friends awaited. At that point I was dismissed, though I did get a big hug. What more could a dad want?

Third grade was my favorite year of elementary school. I had a couple of really good friends in my class (Jon and Christine). I had my favorite elementary school teacher of all time (Mrs. Levin). And we got to do all sorts of fun things that nobody would ever let us do in these more enlightened times, such as play with Freon.

Lauren was very happy to hear that 3rd grade was good for me. She got exactly the teacher she was hoping to get (though they’re all good ones teaching that grade at NBPE, really). She has a number of good friends in her class. And if they don’t let you roll Freon around on the palm of your hand anymore, there will probably be something else to do that will horrify future generations.

I remember grade 3. That was the year I spent in a mixed grade 3 & grade 4 classroom. Mrs. Seely was out teacher. The class was geared towards grade 4, but there were too many grade 3'ers and not enough grade 4's so they took the smart third graders (and me, I'm not being humble here. My IQ tested at 80 in grade 2, in high school it tested a tad higher fortunately or I would have been put into the industrial stream) and put us into the fourth grade classroom. I was included so that Bruce Johnson wouldn't be the only third grade boy in the class. Bruce was my best friend and the only person shorter than me in my elementary classes.

A few things that made the year memorable are:
- This was the only class I had with my still good friend and storyboard artist, Al Berg.
- We were thought to be too young to learn French so we third graders were sent to an empty classroom to commit mayhem during French period.
- The great fart incident in which Mrs. Seely caused most of the class to fall over row-by-row and we learned never to give her apples before lunch.

It was a good year.

That was indeed a very good year. :)

Thanks for the mental image of the Great Fart Incident, too.