It was a musical day down at Not Bad President Elementary, and everyone was there.

Really. Everyone. It was as if the entire population of Our Little Town had gathered together in the Multi-Purpose Room, with a row of movie cameras in the back and a row of unnaturally tall people seated up front. There must be some kind of requirement for both of these things.

But it’s nice that these events are well attended.

We were there to see the second grade performance of “Songs of the Jurassic,” a toe-tapping musical about dinosaurs that has had audiences in peanut-butter-scented rooms across the country cheering and clapping. And on top of everything else, Lauran had a speaking part. So of course we were in the front row.

Way off to the side, so we could see past the unnaturally tall people, but still – front row.

The students filed in promptly at 1pm and stood there, scanning the crowd for loved ones and waving frantically when they found them. We all waved back, which kind of defeated the purpose since with everybody on both sides of the stage waving at everyone else on both sides of the stage it was rather difficult to discern who was waving to whom, but it was fun and that’s all that mattered. 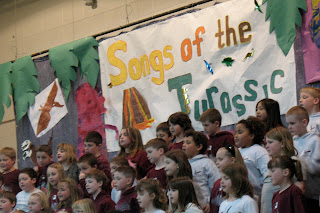 Lauren was part of the group that came down off the risers after the second song to stand in front of the microphones. She had one line – a descriptive account of what dinosaurs would and would not eat (the latter category including pizza with anchovies, apparently) – and she did it well. She even ad-libbed a bit at the end, and it sounded right enough that nobody likely noticed that it wasn’t in the script. 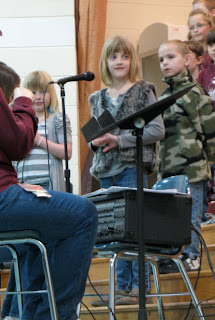 It was a short show, as these NBPE shows usually are (the third graders were performing the same show right after) and at the end the parents were invited up to the center of the house to take photos. 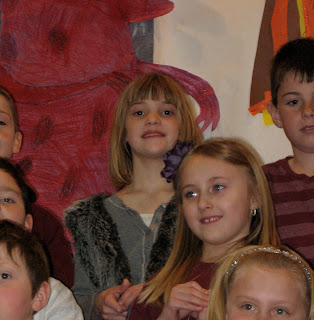 I thought Dinosaurs ate coconut? Maybe that was just before the "fall." Oh, well.

No, you're thinking of tea and crumpets. They go with the English saddles, just like at the Creationist Museum.

I will pass along your support - thanks!