Happy Anniversary to Us!

Fifteen years ago today I found myself smuggling a keg of beer into the second floor of a reception hall and asking myself, “Is this any way to be spending my wedding day?”

It was a warm day for November, fortunately, and the caretaker of this particular reception hall had apparently been doing sit-ups under parked cars for most of her life and so did not notice the thump-thump-thump of the full keg up the marble steps of the hall.* So it all went off without a hitch. Mike and I got the keg into place without incident and my guests were treated to a post-Prohibition wedding reception.

It’s been quite a ride, this last decade and a half. 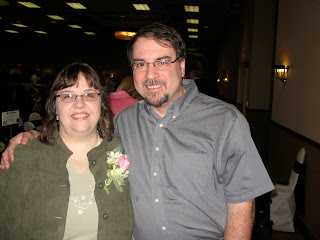 
*She also managed to convince herself that I was at least three different people and at 8am the next morning called to complain to me about one of the other mes. “I’ll talk to him,” I told her.
Posted by David at 11:53 AM

Happy anniversary to you two, too! I'd do it all over again except I'd elope.