And the Hat Came Back

The hat has made a comeback.

Every year at Christmas we play The Game – a gift-swapping game that is a fun and entertaining substitute for the usual slog of presents among the older generations of our family on both sides, since at this point we can just get what we want ourselves and save the real gift-buying for stuff for the kids. I’ve described this game before so I’m not going to go into detail here except to note that The Game requires each participant to contribute one nice gift and one goofy one.

Five years ago, one of the goofy ones was, for lack of a better description, a pimp hat – a poofy cap made of pink velour and covered with reflective silver sequins.

This ended up in the possession of either my cousin Paula or her husband Randall, who both looked quite smart in it. 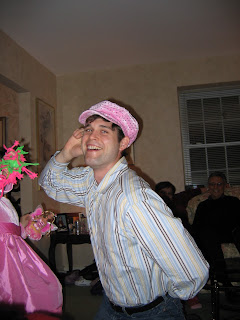 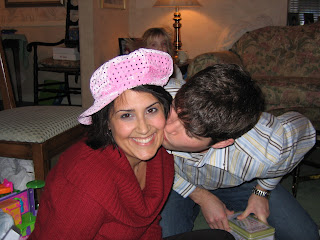 Even so, they were happy to donate it to the girls when Tabitha expressed her interest, because they are generous people that way.  Plus, they live in the South, where it is usually too warm to be sporting a stylin' lid like that and you can't let something so right go to waste. 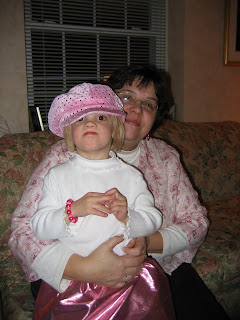 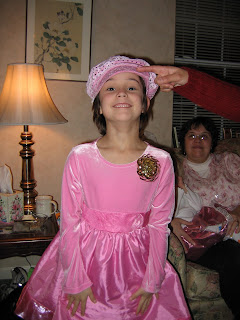 And so we returned to Baja Canada hat in hand.

The hat kicked around for a few years as an occasional piece before being relegated to the Dress-up Box down in the cellar. The Dress-up Box is where you put things that are too old, too weird, too fantastical or too clunky to wear to school, and as such is a lot like my normal wardrobe except with a lot more pink and definitely a lot more flashing LEDs.

But this year the hat made it back upstairs into the big leagues when Kim gathered up anything that could even vaguely be described as “winter gear” and deposited it into two big fabric boxes in the mudroom. And that’s where Lauren discovered it. 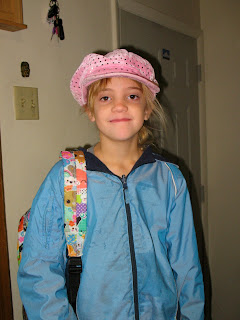 She rocks that hat.

Although I always have to fight the urge to buy a newspaper off of her when she’s wearing it.
Posted by David at 10:13 AM