Sleep Over and Out

Tabitha once said that the reason they call them “sleep-over parties” is because once the party starts your chances of getting any sleep are pretty much over. And truer words were never spoken. But at the moment there are four girls sprawled across my living room, slowly coming down from the sugar, popcorn and general kid-energy and slipping off into dreams, and this is a good thing.

Today was Lauren’s big sleep-over party, that she had been buzzing about for just weeks. It’s not her actual birthday – that’s not until Sunday – but as she will be trick-or-treating that night and as it is also a school night, we moved her birthday to Friday. We do that in my family. Holidays happen when you’ve got time for them, because otherwise what’s the point?

The problem with our plan this time is that the schools were off Thursday and Friday, and many of Lauren’s friends took the opportunity to go out of town for the weekend. Plus it’s fall, so many of those who remained were sick. So in the end there were just four girls present – Lauren, Tabitha and their friends Ashley and Meghan.

And yet a good time was had by all, so let that be a lesson.

And how could you not have a good time? There were friends. There was pizza. There were cupcakes – with frosting made entirely by Tabitha not once but twice, since we forgot that Meghan couldn’t have red dyes the first time. Two kinds of homemade buttercream frosting? How can this not be excellent? There were also presents. And yesterday I cleared out a significant percentage of the basement for open space for them to run around in and re-clutter, which they dutifully did, at ear-splitting volumes. 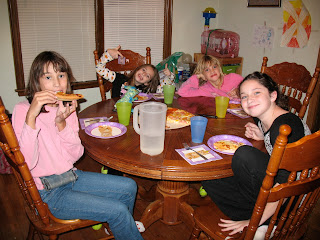 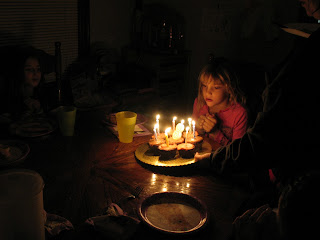 So now Lauren is officially 8, more or less.

This means she can ditch her car seat, if we read the laws right. She has been itching to do that, though why is not clear – it will only make her shorter in the near term, but perhaps that is a price she feels is worth paying to be unencumbered by such reminders of her childish past.

It also means that she is that much closer to being the person she will become. As a parent, you can’t but hope for that outcome – it’s why you do all the things you do. You want her to grow up big and strong, not just physically but in every way, so she’ll be sure of who she is and happy in her own skin, confident enough to stand up for her beliefs and to let others disagree without taking it as an affront. You want all that for her and more, and it still tugs at your heart to see it happening right before your eyes anyway. 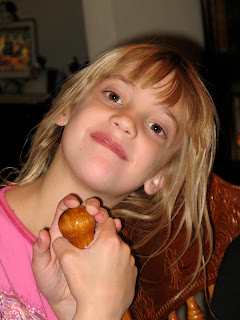