Getting a Start on Halloween

Sometimes you have to stand up to your workload and deny it.

So despite the fact that I had nearly three dozen exams to grade, a performance to finalize for Home Campus, and any number of other things that were probably more pressing than having fun (or blogging, for that matter, although blogging is a special subset of having fun), last weekend was time to Get Outta Dodge for the annual trip to the wilds of Michigan, where Kim’s brother Dave and his family have a cabin in a swamp.

I know. But it’s more fun than it sounds.

For one thing, the “cabin” is actually a snug little cinderblock house, complete with things like running water and electricity.

For another, the swamp – technically a “wetland area,” which is what people call swamps nowadays for fear of offending the wildlife and ogres that call it home – is a bit off to the side, so there are plenty of dry areas to sit and run around upon. And if you want to go to the swamp, you can, because you never know what the ogre is up to and it might be interesting to find out.

Most importantly, though, the place is filled with good people and good food, and pretty much anywhere can be fun under those conditions.

It is a bit isolated, though, so if you hear banjos you would be best advised to get your city-slicker carcass moving along, especially if you, like me, regard anywhere that doesn’t have its own public transportation system as unfathomably rural.

The girls look forward to this trip every year. As soon as the car stops moving they leap out and start zooming around unsupervised with all of the other kids there – because really, where are they going to go? – while the grownups sit around and do boring grownup things, like talk, drink and eat. So they don’t have to listen to us, and we don’t have to worry about them. It’s a win/win, is what I’m saying.

Dave and Karen go pretty much all out for this event. For the big people there is a wide array of food and drink and a number of fires around which to gather. But the event is really for the kids, both the actual ones and the virtual ones that we’d all like to regress to. There’s a pile of costumes to try on, for example, and an array of pumpkins ready to be stabbed, disemboweled, and turned into party favors because that’s just what one does on Halloween. It’s what keeps us from doing it to our political leaders, so this kind of diversion does serve a useful social function when you think about it. 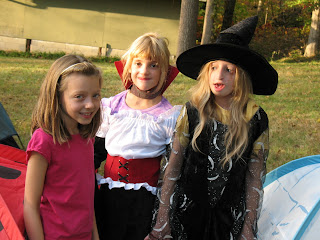 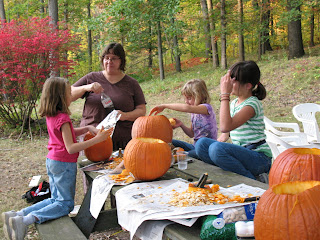 But the key things are the Haunted Trail and the annual Asinine Theater production.

Dave and his buddies probably put more time into that Haunted Trail than is wise, but you cannot fault them for it – not when you see how the kids respond. You follow the track of battery-powered lights into the darkness, through the swamp (“wetland area,” excuse me) and along the creek, where any number of decorations, flashing lights, displays, and actual people are waiting to jump out at you.

Those screams? They’re from the kids. No, really.

This year’s Asinine Theater production featured marionettes liberated from a defunct amusement park and an improvised bongo accompaniment, just to keep the Surreal Quotient high enough. It was a hit.

Unlike past years we did not camp out on the dry parts of the property overnight. Between lingering fall colds, fear of being chewed alive by mosquitoes (unfounded this year, as it turns out, but always an issue in a swamp wetlands area) and the simple fact that I’m too old to be sleeping on the ground, we decided to stay in a hotel. And there was one nearby, as a matter of fact. Full, no less, as this part of Michigan is not all that far from South Bend and Notre Dame was playing at home that afternoon.

It was a shock to get back to reality on Sunday, and the workload that had been denied was in a foul and unpleasant mood that I am still paying for.

But it was worth it. 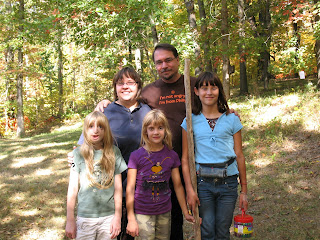 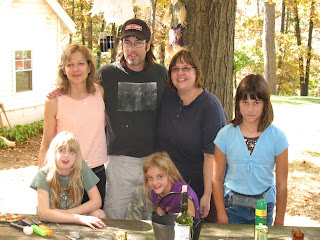