It was the annual Halloween Fest down at Not Bad President Elementary last night. Everyone who was anyone was there.

Every year NBPE gathers the troops together for an evening of costumed entertainment. In previous years this involved a costume parade that would take the kids from one candy-distributing classroom to another for long enough that each child would end up with enough candy to give jitters to people three towns over.

And then the schools would close for a long weekend to ensure that this would remain the problem of us parents rather than them.

This year they decided to forego the costume parade and pack up all the donated candy into small bags – enough to make the kids happy without causing them to vibrate – to be handed out as they left. This was a great plan, although it did mean that there would have to be some other activity planned to take up the yawning gulf of time between arrival and sugar rush.

And so there was a dance. A costumed dance.

Aren’t you sorry you didn’t think of that?

With Kim’s position high up in the administrative ether of Home Campus draining the life force from her body and the hours from her day, it was largely left to me to get the girls into their costumes. I cannot tell you enough how poor of an idea this was. But one does what one must, particularly in the face of excited munchkins, and eventually Kim came home and fixed everything.

This year, for the first time in memory, Tabitha was not a cat. Instead – since we already had the cape from her stage performance of the same role last year – she was Little Red Riding Hood. 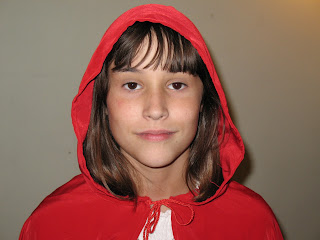 Lauren, for her part wanted to be a vampire. Or a witch. Or possibly an undead vampire witch. Whatever – it looked suitably ghastly and that was all that mattered. She certainly was having fun with it. 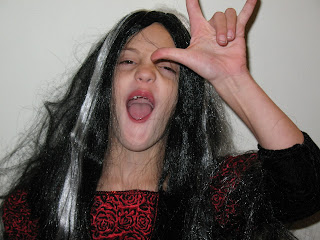 As has become the norm of late, the girls hit the school running and that was pretty much the last we saw of them for the rest of the night. I was on hallway patrol for a while (the temptation of empty school halls hits even grade schoolers) and Kim eventually tracked the girls down and ordered them to eat some dinner, but for the most part it was a grown-up-free evening for them. 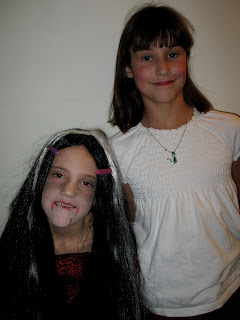 Um, David? May I point out that with her current bone structure, young Tabitha promises to grow into an incredibly beautiful woman?

The only consolation I can give is that usually such beauty doesn't come to full flower until the woman is in her mid-twenties or early thirties. This gives ample time for emotional maturity to catch up with physical attractiveness, and lets Dad off the hook, as well.

But in the meantime, may I lend you the Shovel of Doom™?

NOTE: I am not slighting young Lauren in my comments - I just can't see her face for the FABULOUSNESS of her wig and makeup.

Oh, Janiece, I know, I know (but thank you anyway for pointing it out - it's always nice to hear!). And this will become an issue sooner than I want, I'm sure.

I am already planning to purchase a sword and a whetstone so I can sit in the living room sharpening the one with the other in a suitably hormone-deadening manner when the suitors come to call. But the Shovel of Doom would also be a welcome addition to the arsenal - thanks :).

David, my father was a Deputy Sheriff. His strategy was to clean his service weapon, in uniform, when the young men would come to pick me up. His only comment? "Have her home on time, son."

Amazingly, I was never late.

And I wish that story wasn't true.

You know, I always say that routine about the sword, but I know I'll never actually do it.

My real plan is to raise daughters who won't need me to do that.

That's a much better plan, actually.

My own taste in men was cause for much lamenting and gnashing of teeth (on everyone's part, including mine) until I was over 30. Hopefully your own lovely girls will have more sense.