Tria is an outdoor cat at heart. This potentially is a problem here in Our Little Town, where cats are legally required to be on a leash when outdoors – quite possibly the least effective use of law-enforcement authority in American history, not counting the local ordinance in effect in Gettysburg in 1863 that banned the discharge of firearms. As a practical matter, though, nobody worries about it – she goes out most nights. But not this night, as a black cat out on Halloween night is just an invitation to commit nonsense for somebody who thinks they have a sense of humor.

It’s been a busy weekend.

This is the kickoff of our holiday season. We have conveniently scheduled all of our major gift-giving events for the 63 days between Halloween and New Years, inclusive – birthdays, anniversaries, Christmas and so on – which makes the rest of the year pretty quiet, but means that The Fun Starts Now.

We spent Saturday morning cleaning up from Lauren’s sleep-over party, since Party Mark II: This Time It’s Family was scheduled for that evening when Kim’s parents came down for a visit. Kim made beef stew and another cake, since the cupcakes were sadly depleted from the first party, and Tabitha whomped up a brand new batch of frosting, this time in Halloween colors and styles. Lauren was suitably impressed. 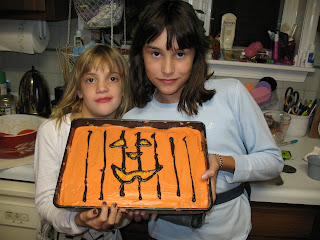 As with the first party, a good time was had by all. The adults did a lot of sitting around and talking, as adults are wont to do, and the girls did a good job of keeping their 3-year-old cousin Brody entertained. And then there was dinner.

And then there was cake. 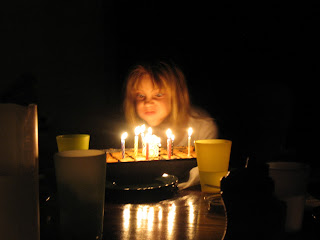 There were also presents, because such things are fun.

We woke up this morning to the realization that it was, in fact, Halloween today, and therefore all of the time we kept saying we had to get ready for Halloween had largely vanished. This sort of realization is what we like to call “normal” around here, as deadlines creep up in plain sight until they can no longer be willfully ignored, and then a whirlwind of motion kicks in and Things Get Done.

So the morning was spent carving pumpkins. Because nothing says “festive!” like eviscerating a vegetable and punching holes in it with a steak knife. Artistic holes, mind you – it’s not just a random stab-session. 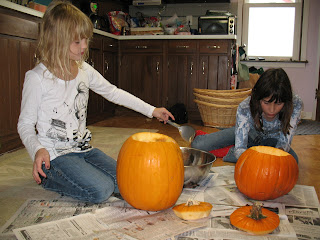 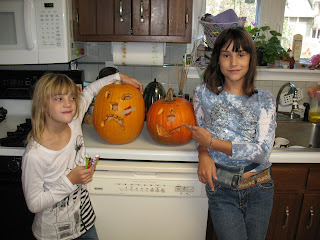 Properly outfitted with candles, the pumpkins were then placed on the front porch to greet the trick-or-treaters.

After the pumpkin carving we went out to a birthday lunch at Lauren’s favorite restaurant, a Wisconsin chain called “Noodles” that specializes in … wait for it … noodles. Apparently their mac-n-cheese is just heavenly. And it is just the sort of thing you want to look at after you have disemboweled a pumpkin, too.

Having consumed sufficient carbohydrates, we then took a ride over to the Big Bookstore in Madison so Lauren could work her way through a gift card that she received for her birthday. I cannot tell you how proud I am of my daughters that they consider going to the bookstore to be a treat. There was much pillaging and looting of printed materials, and much rejoicing from all of us.

But time moves on, and we hurried back home to Our Little Town for to get ready to trick-or-treat! After our traditional Halloween dinner of chicken pot pies (fast, easy, and no clean-up to distract from more important activities) the girls got back into their costumes and we headed out into the brisk fall air for some racketeering. 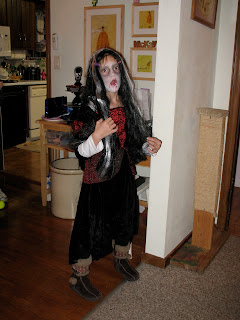 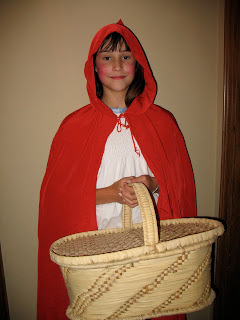 Really, who thought this routine up? You wear strange clothes, knock on people’s doors and demand candy, and they give it to you. Life. Is. Good.

We made a 90-minute circuit of the neighborhood, accumulating enough sugar keep a pre-school in orbit before the girls decided that they had reached their limit. It is nice to live in a part of the country where it gets cold around this time of year, as it does introduce a natural end-point to this sort of activity.

So right now there are two barrels full of candy in the living room, two cats in the bedroom (one of which is silently fuming about this sad state of affairs), two kids more or less in bed and waiting for school tomorrow, and two very tired parents about to say those three magic words that so often keep a marriage happy.

What kind of moron made up that law? A tea partier?

I know a way to get around it. Let the cat out with a leash on her. Period. Where does it say somebody must hold the end of the leash?