The Phillies are trying to kill me.

I've been paying more attention than usual to the Phillies this season. I suppose you could call that being a bandwagon fan, since their winning the World Series last year probably had something to do with that, though in truth I've been a Phillies fan since the Nixon administration and have never really stopped. But it's always easier to pay attention to teams when they're winning, just as it is easier to pay attention to entire sports when teams you like are winning.

Not that the Phillies winning seems natural or even comfortable to me. I know they're close to a playoff spot for this year's World Series run, but in my head I'm still coming up with ways they can lose last year's. As much as I like the idea of my team being the champions, it just doesn't strike me as the sort of thing an orderly universe would produce.

That's why I finally broke down and got a mug. 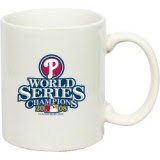 Things are more real when they're on mugs.

I've even been trying to watch them play now and then, and it's been fun. You forget, after a long absence, how enjoyable a game baseball is - the rhythms, the spikes, the long intervals where nothing much happens. It's a much calmer game than football or hockey.

But I have to stop watching, because every time I turn on the game the Phillies manage to find a new way to lose. They're getting good at it, and this late in the season is not a good time to get good at that. They have a four game lead with five to play - down from an eight game lead not a week ago - and every true Phillies fan knows exactly what's coming.

So I'm trying to ignore them again, in the hopes that this will turn the tide in their favor.

It's a hard thing, being a Phillies fan. 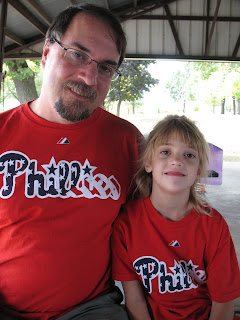