Lauren has decided that she wants curly hair.

I am not sure why she has made this decision - her hair seems perfectly lovely to me as it is - but apparently she has thought long and hard about it and has made her decision and That, My Friends, Is That.

Bear in mind that she is six. This house is going to be a very interesting place to be in eight or nine years, let me tell you.

You have to hand it to her, though - when she makes a decision like that, she is willing to deal with the consequences of it. And really, what more could a parent ask? It's her hair. As long as she's responsible enough to do what she wants and accept what comes with it, well, there you go.

So she persuaded Kim to get her a set of curlers.

These are not the mil-spec hard plastic combat curlers of yore. No, yer modern curlers, they're made of foam, see, and they come in a pleasing assortment of pastel colors, each color denoting a different size curl. They even have their own clear plastic carrying case, roughly the size of a lunchbox.  And that's progress.

The only down side to them is that Mithra eats foam, so Lauren has had to be fairly careful to keep her curlers locked away in their case lest the cat's litterbox become much more visually interesting.

Most of last week Lauren would dutifully pull out her curlers and get Kim to set them up - get her hair wet, curl the hair around them, lock them into place, and so on. And then she would go to sleep with them, which I thought was quite a commitment to the whole thing. I know that would drive me nuts, anyway. 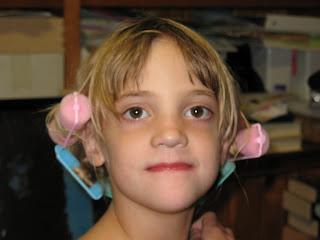 Even Mithra left her alone, which is more than most nights. You know you're onto something when even the cat respects your space.

But in the mornings Lauren would take out her curlers and there it was - the hair of her dreams. 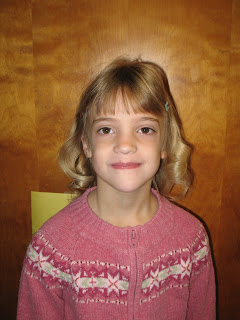