It's been two days now, and my feet have finally forgiven me.

On Friday evening I participated in my second "Walk a Mile in Her Shoes" event, which is designed as a fundraiser for the local YWCA's domestic violence programs. It was a rather grey day here in Our Little Town, rainy and grim, but the rain cleared off by the time the serious action began as if it knew that it stood little chance against us. We were wearing high heels - we already looked goofy. A little rain and a few umbrellas wouldn't change a thing.

There were about 120 local men who showed up in their heels, including a number of the more influential guys in town - the president of the City Council and at least one other councilmember that I saw, the police chiefs of both Our Little Town and the one just north of us, the City Manager of that northern town, bank presidents, firefighters in uniform, and a good portion of the minor league hockey team that plays here, just to name a few. There was also a contingent of Harley dudes riding about as well, resplendent in their heels, because nothing legitimizes actions around here like the participation of Harley dudes. The local Harley dealership even donated the pavilion space this year.

I was there too. Somebody has to pad out the house a bit. 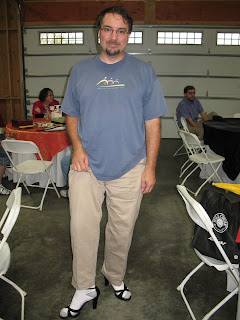 Just as last year, there was a short introductory ceremony that started off with all of the camp and humor that you would imagine an event featuring nearly a gross of men in high heels - some of them in drag - would entail. And then the police chief got up and reminded us of why we were there: that domestic violence was not just a private problem but a community problem, and that it needed to be Stopped and the perpetrators Killed With Fire. Although I might just have interpolated that last bit.

And so, filled with an odd mixture of righteous wrath against scum-sucking lowlifes and high spirits to match our stylin' heels, we set forth. 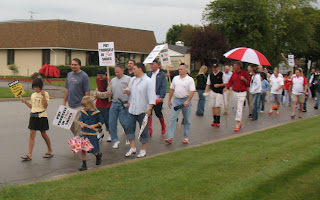 Do you have any idea how long a mile is when you're wearing high heels? Particularly if your normal footwear is a pair of black sneakers? Quite long, in case you're wondering.

We cruised up to the highway, cut across the K-Mart parking lot and ambled down the next highway, carrying our signs and displaying our complete lack of fashion sense to an appreciative and generally supportive traffic flow, many of whom honked and waved. They know a good cause when they see one. 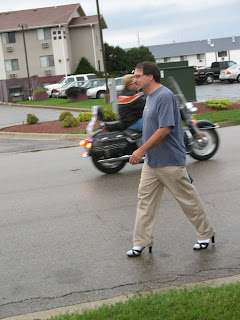 We finally staggered back to the pavilion and that rustling sound heard throughout the county was the sound of dozens of men frantically getting their normal shoes back on before diving headfirst into the nearest adult beverage.

A little wine cures a lot of hurt. 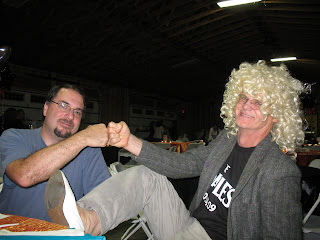 Tabitha and Lauren walked with me. Some of that was just because it was fun, but some of it was also because domestic violence is an issue they should be aware of and they should know that people care enough about not tolerating it that we'd march through the streets in ridiculous footwear and wave signs at passing motorists. They're still young enough to look up to me, and I want them to know these things. You take it a bit more personally when you have daughters, I find.

Why do men get up in high heels and march through town?

Domestic violence advocacy and a quote from the Montgomery Bus Boycott in the same post. We must have really indoctrinated you, Dave. Either that, or you were already our kind of folks. :-)