I once figured out a loophole in the present security mania that so distorts American life and values.

For a number of years I ran a museum in the Small City north of Our Little Town. It was in many ways a typical nonprofit institution in that it was nonprofit in every conceivable way, and thus there was an ever-present need for both fundraising events to raise money and publicity events to keep our name in the public eye so that people might give us money at a future point as well.

I was never very good at that part, really. I enjoyed the history part of the job, I got a certain satisfaction out of the “shepherding the major project through the bureaucracy” part even if it turned my hair grey and my nights into occasional expanses of sleepless agitation, and the people involved with the place were generally a lot of fun, but those events were things that more often than not drove me bug-eyed.

Call it the curse of being an introvert in a high-visibility position. As curses go, it’s not so bad.

So we were always looking for events to hold, is what I’m saying.

At this point in the story you need to know that there is another museum – a science museum – in the Rather Bigger Town just south of us, and for reasons that probably have to do with explaining Newton’s Laws and such (although I've never really had the heart to ask them) they have a trebuchet.

For those of you unfamiliar with your medieval siege engines, a trebuchet is a species of catapult. It is basically an A-frame of some kind with a pivot point at the top of the A and a throwing arm mounted on that point. At one end of the arm is a sling or some other holding mechanism, and at the other – the thing that makes it a trebuchet rather than some other species of catapult – is a counterweight. You winch the arm into position, fill the sling, release the counterweight and then physics takes over and whatever you put in the sling goes hurtling off into the distance.

A full-scale trebuchet is actually an astonishingly fearsome weapon. It can hurl a quarter-ton projectile for several hundred yards, and they used to use them to destroy city fortifications and castle walls.

This one was rather smaller. It had a 300lb counterweight and could toss a medium-sized pumpkin roughly half the length of a football field. The science museum had an annual event just after Halloween that was designed to do just that and we used to go down every year for it. It was an awful lot of fun.

One year it hit me that this sort of thing might go over well for our museum as well. And like magic, everything fell into place.

The folks down at the science museum were generous enough to loan us their trebuchet for a fairly nominal fee, on the provision that their staff be the only ones to operate it – a provision I was only to happy to abide by, not being trained in the finer techniques of medieval warfare. They also made us work around their event, which was only fair. The farmer whose field abutted the rear of our museum said we could fire pumpkins into it all we wanted, as his crops had been harvested by that point and he’d just plow under whatever vines grew up in the spring. And the local pumpkin vendor agreed to come by to sell pumpkins to those who wanted a flying pumpkin of their own but didn’t have one to bring.

We were all set.

And then, about a week beforehand, a thought occurred to me.

So I called up the good folks who ran the Small City and said, “I have an odd question for you.”

Now, by this point in my tenure they were used to me asking them odd questions, so to their credit they did not flinch at this introduction. “And what would that question be?” they asked.

“Do I need a permit to fire a trebuchet within the city limits?”

There was a long pause at the other end of the line.

“You know,” they finally said, “nobody’s ever asked us that before.  We'll get back to you.”

You know what? It turns out you don’t.

But medieval siege engines? Those are okay.

Does Homeland Security know about this? 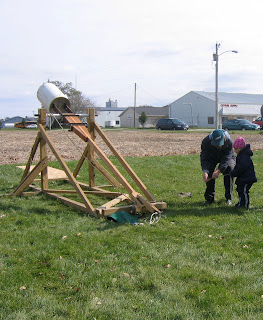 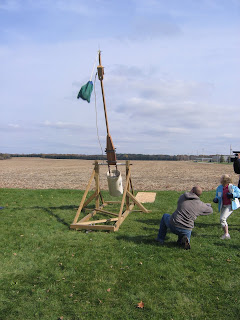 I love trebuchets. There was a fabulous display about them during the Genghis Khan exhibit at our Big City Museum.

Mad scientists and their monsters.

@Janiece - Trebuchets are just the coolest things. Add pumpkins and, well, I just need to lie down.

@Eric - I stand corrected. And amused...