1. It’s that time of the semester when all I really have time to write are these quick little lists. Oh well. At least I’m writing something, though whether that counts as positive depends on your point of view, I suppose.

2. We spent a lovely hour or so today checking in with all of Lauren’s teachers down at Local Businessman HS. They all had good things to say, which we expected but which was still very nice to hear. It was strange to be having parent/teacher conferences by Zoom or Google Meet or whatever other platform people were using, but still a good thing. Nice work, Lauren. I’m proud of you.

3. I have lost the battle with Facebook’s new format, despite the valiant efforts of the little plug-in that has been keeping it at bay for the last few months (and which continues to keep the Zuckerborg’s worst excesses to a minimum, at least for now). Every time FB decides to “upgrade” things I lose functions that I enjoyed. I still haven’t figured out how to look through my own timeline to find old posts, which was a fun thing to do – it was interesting to choose a random month out of the decade or so that I’ve been on that platform and scroll through it to remember how that month felt. Oh well. Optimized. At some point I will throw in the towel on the whole platform, but for all of its many and well-documented flaws it still does a good job at what it was originally designed to do – connect friends who are too far apart in a convenient and easy to use way – and I will miss that when I go

4. Be very careful posting jokes, folks. These are revolutionary times. 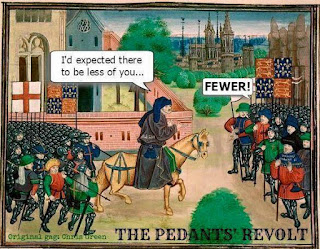 5. It’s nearly Election Day, which means that the Fascist regime currently squatting in the White House is getting increasingly desperate. Expect violence, my fellow Americans, and stay strong. There are more of us than there are of them.

6. We have so, so many eggs. Lauren’s chickens are happy little birds and have been laying up a storm for the last few months, which means that at any given point we have somewhere between three and eight dozen eggs on our kitchen counter. We like eggs. But we like other things too. I made a double batch of pizzelles last weekend mostly because it consumed a dozen eggs. They were really good, too.

7. We’ve already had our first snow and it’s not even Halloween, which is a bit early even for Wisconsin. So now there’s a place for the rabbits to winter over in the basement, though we’ll leave them out for a few weeks longer – as long as the overnight lows don’t go too far below freezing they’ll be okay. Last year we had six inches of snow for Halloween so we brought them in then, and then it didn’t really warm up until April so they didn’t get much outside time after all that. It’s good to have them get the fresh air.

8. Milo, the world’s oldest rabbit, continues to chug along nicely.

9. Last night we got to watch a virtual performance by a friend of ours – an actual professional who had been booked for a performance over at the main stage at the Mother Ship campus and who managed to get it to work over Zoom. It was a lot of fun, really, and it was good to connect with him afterward.

10. Somewhere in my college days when my roommate and I would spend Saturday afternoons making the rounds of the half dozen or so used book stores that surrounded the campus, I stumbled into a book signed by Robert Louis Stevenson. I stumbled into it again the other day, sorting through my bookshelves. It definitely looks like his actual signature and the book was printed during his lifetime, so for all I know it’s real. I have no idea how much it’s worth – it’s not one of his famous books, though it is in pretty good condition – but likely not a whole lot. These things are never as valuable as you think they should be. But they’re pretty cool nonetheless and given that I probably bought it with coins I suppose it was a good investment. Mostly, though, it’s just a fun thing to look at, and that’s enough.

11. Apparently I have lost the battle against Blogger's new format too. Why is it that whenever a computer company uses the word "upgrade" things get less useful and more frustrating?
Posted by David at 8:37 PM

3. I threw in the towel on that platform the day I heard about it.

5. Evidence would contradict: Stupid people in real life are like dead people in The Sixth Sense: they’re everywhere, and they don’t know they’re stupid.

6. One dozen = Eggzactly 29.725 too many eggs. I cannot comprehend a number like “eight dozen” when it comes to eggz. I’m pretty certain that I’ve consumed fewer than one dozen eggz so far this year. (Solo. Total does not include eggz used in recipes for other actual edible food items such as cakes & french toast and such … “I’d like the steak & eggs, please.” How would you like your Steak? “Medium rare.” How would you like your eggz? “Missing.”)

7. NDOT is stockpiling salt for the winter. The piles are 1/3 the size they normally are. Must mean that we’re in for one bitch of a winter.

8. I can remember when Milo was just a kitten. How old does that make me?

11. Blogger has a new format? You'd never know it from its current lack of functionality - seems almost normal. And it is software. They “upgrade” the software. And the correct answer to your rhetorical question “Why is it” is job security. If they did it right, they wouldn’t have a job to come back to tomorrow.

3. I find it useful, though increasingly irritating. It keeps me in touch with friends and family in a convenient way, and it's where the jokes went after email got corporatized. Most of the jokes have now migrated to other areas (Tumblr, Instagram, etc) but they get recycled on FB often enough that it's worthwhile. I stopped discussing politics on FB years ago, as all that ever got me was older. I will still post political things now and then, but they're not up for discussion.

6. I didn't like eggs until I was in my 30s, and even now I will generally stick to scrambled eggs only once in a while. But they go into other things (fried rice!) and they're good that way. And fresh eggs from non-factory-farmed chickens are just so much better than most of the eggs in the supermarkets.

7. I like winters because you don't need an excuse to stay home when the weather is rough - you can just stay home. And now that everything I do is remote, I don't have to worry about getting to campus at all.

8. The thing is that we don't really know how old Milo is. He literally came with the rabbit hutch we bought in 2011. Whoever sold the hutch to us dropped it off in our driveway with Milo still in it, and insisted we keep him. He was full grown then, so we figure he's at least 10 now. Most rabbits don't make it past 6 or 7. I guess that makes us ancients in his eyes. Sometimes in mine too.

11. It's always been a bit of a trick to transfer text from a Word document (where I can edit to my heart's content without being stuck on a platform) to Blogger without getting the formatting screwed up. In the last version of the software I could remove all the formatting by pasting the document into Text and then recopying and pasting into Blogger, which then allowed me to add photos and such. Last night I tried that and it kept adding formatting, and then I could get some of the formatting to go away but it would add it back in on other parts of the post. And on and on.

I hate when computer companies use the word "upgrade" because it's never an upgrade from the user's perspective. I don't know what Blogger gets out of making their service harder to use and easier to leave, but perhaps one day they'll let us know.