I Do Not Think That Means What You Think It Means

I am the grocery shopper in the house, mostly because I enjoy it. I even enjoy going grocery shopping in foreign countries, because it’s interesting to see what other people consider to be normal food. Familiar and normal are different, after all.

Here in the Age of Lockdown, the local grocery store is pretty much the only place I go anymore. Sometimes I make it to other shops, occasionally I’ll feed Lauren’s chickens out at our friend’s barn, and once in a while I go into Home Campus to do things I can’t do remotely (a surprisingly small percentage of my various jobs, really), but for the most part my world has narrowed to a path that runs from my house to the grocery store and back.

For a long time the mask-wearing rate there was about 60% or so, but this has improved markedly since the governor here imposed a mask mandate. Yes, the GOP legislature in Wisconsin – a body that has not passed a single piece of legislation in over six months and yet still insists it has the right to draw a paycheck (don’t you hate people who live off your tax dollars and do no work?) – has spent much of this year suing the governor in an attempt to prevent any state authority from doing anything to help the people of Wisconsin during the current plague, but for the most part people here in Our Little Town have figured it out. Since the mandate went into effect I’d say the compliance rate at the grocery store has hovered around 95% or so.

This tells you two things.

First of all, it tells you that at least here this is not considered a partisan issue. Given the realities of a divided electorate, a 95% compliance rate is a clear sign that both Republicans and Democrats have figured out that the virus doesn’t give a damn about your politics and will kill you no matter what you believe. This is, strangely enough, somewhat heartening.

And second, it tells you that even with that there are still a few people who insist that their personal inconvenience is more important than your life. People who think that having to comply with a basic public health measure is somehow a violation of their rights. People who don’t understand how science, Constitutional law, or basic morality work.

Invariably, those people have a Gadsden flag emblem on their person somewhere. 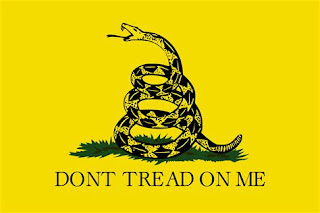 This is why I have come to regard that emblem as a Moron Detector.

It was, at one point, a symbol of the American Revolution – a declaration by American patriots that they would stand in their own defense against a Crown bent on denying them the traditional rights of Englishmen. Whether the Crown actually intended to do anything of the sort is something of an open question of course – up until the mid-1770s it was not really all that clear that either side understood what the other was trying to do and only after the shooting started did the lines harden that way. But at least that was the symbolism as it was intended.

It doesn’t mean that anymore. 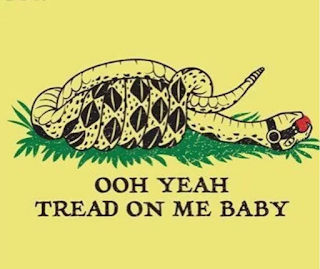 Now it is used almost exclusively by people who regard themselves as the center of all creation, who see their own personal wishes and conveniences as being paramount over all other concerns, and who don’t see the irony of using a Revolutionary symbol of community strength as a cover for making narcissistic threats to the common good.

Someday the rest of us will have to reclaim that symbol and turn it back into something we can be proud of. This may take a while, though. 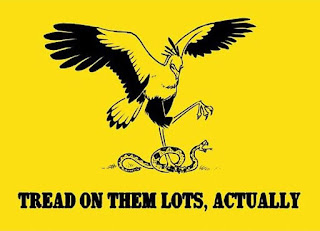 Here in Drumphville West, mask compliance hovers somewhere around 40%. Half of those are people who have not yet partaken of the Kool-Aid, the other half is my household.

It was 12° F here in the desert this morning. So of course, our furnace decided to go South. HVAC company says they will be able to squeeze us into the schedule somewhere around Thanksgiving. (That is an exaggeration - albeit a minor one ...) Heading out to purchase a couple of space heaters to help us get through the next couple of weeks.

Good luck with the furnace! We're living on borrowed time with ours as well - they stopped making parts for it five years ago, and right now there is a control panel in place that the furnace guy had to customize so as not to blow out our thermostat - so we'll be looking into a replacement soon ourselves. I hope your space heater mission was successful.

Sorry about the low compliance rate in your vicinity. Right now Wisconsin has fallen to only the third worst state in the union for new cases (after both Dakotas) after leading the nation for a while, so even most right-wingers have conceded the reality of it and are wearing masks, at least inside stores. Science doesn't care about beliefs. I hope your neighbors and family don't bring you down with them.

We have heat! They snuck is in between a couple of other calls on the block. ($400.00 doesn't go as far as it used to ... but at least I don't have to replace the entire furnace like the guy 4 doors down - he's looking at about 6 times more than I just put out!)

On the other front: I'm not worried about family (100% compliance or they get banned) or the neighbors (90%+) 'cause I live in a neighborhood that has a small enclave of Democrats in a sea of Frumpers. It's the idiots in town that scare me the most - science deniers one and all.

Thor save us from the obliviots.

Heat is good in cold times!

Yeah, it's an interesting time going out into the world. Most of the places I go to are pretty good about masking up but there are always a few plague rats who don't get the word. I expect it to get worse here for at least another week (the fallout from a large and almost entirely maskless event here a couple of Saturdays ago) and after that, we'll see.

The only people who ever come to visit us these days are a) a couple of Lauren's friends that she sees every day in school anyway (so zero added risk to what we're already doing) and b) once in a while a friend who has already had the disease and recovered, so we figure she's a good bet (and she's really good about masks anyway).

I was at the store today doing a bit of "blizzard prep" - I expect that there will be disturbances and disruption next week from right-wing fanatics and there may be a period of about a blizzard's length where it will be good to have some extra supplies in the house - and even at Sam's Club mask compliance was about 98% if you include "nice try, there" in your count. But I stay in as much as possible anyway. Sigh.

The following is merely an observation and should not be viewed as any sort of criticism (except maybe the tongue-in-cheek variety):

Pandemic. Contagion. There really is no such thing as ZERO added risk.

Went shopping last Sunday for lay-in supplies. $472 got us enough to tide us over for a while. Hope it's enough to get thru whatsa comin'.

In other news, I was sitting on the front deck last night and noticed that a neighbor is flying some new flags. In addition to the US flag and NV state flag, he has added 2 flanking drumph/dense campaign flags and 3 really annoying fascist flags. I guess I should be somewhat grateful that he's not flying an actual red sheet w/swastica Nazi flag. 'Specially 'cause he is one.

No, there is no such thing as zero added risk, that's true. I should have said "acceptable added risk" I suppose. I figure if Lauren is already in contact with these kids every day and they're being careful, we're already exposed to what they've got. Having them here adds a bit to that, but we regard that as a low enough add to be acceptable. This does not apply to friends outside of that bubble. It's a judgment call.

Some people's kids indeed. I saw a great meme float by a few months ago where somebody asked "What's one thing from your childhood that you'd like to see brought back today?" and the person responded, "The prevailing belief that Nazis are bad."