One More Shake For the Road

The Dread Pirate Milkshake is no more.

Lauren has been keeping rabbits as one of her 4H projects for almost eight years now.  We’ve had a few of them in that time.  Hazel, who was given to us by friends as a practice bunny and who succumbed to the hot summer of 2012.  Milo, your basic domestic alleyrabbit who literally came with the hutch we bought in the fall of 2011 – he’s not a purebred bunny so we can’t show him at the Fair, but he’s the most sociable of all the rabbits.  Milkshake, whom we got to replace Hazel because Lauren needed a show bunny.  Maybelline, for when Milkshake was no longer qualified for the Fair.  Maybelline and Milkshake had bunlets of their own eventually, and we kept two of them – Keaton and Miley.  Spotnik we gave away, and last we heard he was living a fine life as a companion to a guinea pig somewhere in town.

We got Milkshake back at the beginning of 2013, so he was about six and a half years old when he died – about what these rabbits last, really.  We have no idea how Milo continues to chug along, but it’s nice that he does.

Milkshake became the Dread Pirate Milkshake in 2015 when he got some kind of eye infection and we learned a whole new word – “enucleation,” which if you value your breakfast you will not look up – but after it was all over he had significantly less depth perception than he had when he started.

You learned not to startle him by approaching him from that side.

After that, of course, he wasn’t going to be winning any 4H ribbons so he retired to a nice life in the hutch, eating hay and generally lounging about.

This morning Lauren went out to feed the bunnies before heading off to school and discovered that he was an Ex-Rabbit, poor thing.  No signs of foul play, fortunately.  Just pining for the fjords, metaphorically speaking.

Lauren’s fine.  She knows how these things work.  It’s all part of the cycle.

I buried him in the back, behind the garage, where all the other critters who have gone to their great reward in our care are buried – a raft of turkeys, a few chickens, a couple of stray cats from one hot summer where they kept getting locked in our garage accidentally.  It’s like a Viking graveyard out there, all those little hillocks. 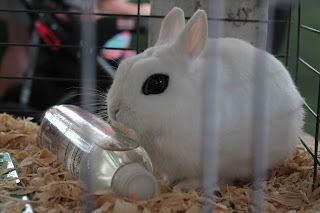