1. My friend Nick and I have agreed that we would happily watch a Game of Thrones spinoff that was just Arya and the Hound wandering through Westeros like they did in Seasons 3 and 4.  Honestly, it was the best part of the entire series.  We’d probably have show-watching parties.  We’d serve chicken.

2. The turkeys are out at the barn now, which means that our house smells a lot better than it did a few days ago.  Of course, this does come at something of a cost, as Lauren and I spent much of our Saturday shoveling out the turkey pen – it had been used as a pig pen last year and, well, there was a lot of pig exhaust still there.  Fortunately it had dried and was not overwhelmingly awful, just mostly awful and very heavy and my academic muscles are just not used to that kind of work.  But the pen is now clean and covered in straw and pine shavings and the turkeys are no longer fighting each other for breathing space in a Rubbermaid bin by the couch, and everyone is happier for it. 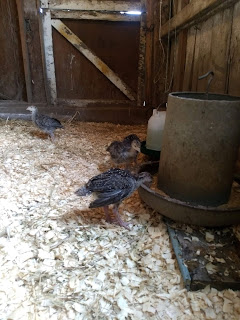 4. This past weekend was the French Honor Society initiation, and Lauren was one of the new members inducted!  Not bad for a kid who switched into French 1 last year (after taking Chinese through middle school) and then got bumped up to French 3 this year.  Congratulations, Lauren! 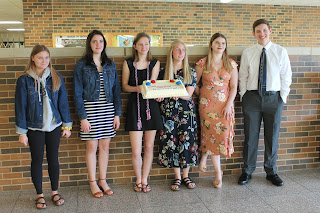 5. It’s coming to the end of the semester now and the grading stacks are piling up even as the grading motivation is ebbing slowly away.  It’s kind of a race.  Will I get my last assignment graded before I melt into a giant puddle of apathy and snacks?  Who knows?

6. I really hate it when there are things going on that you can’t really complain about in public but which are so, so complaint-worthy.  Oh well.  [Insert rant here.]  [Make it a good one.]  [No, better than that.]  [Yeah, now you're getting close!]

7. I have to say I’m deeply impressed at the desperate lengths to which the GOP is going in order to cover up the revelations of the Mueller Report.  They’re not even trying to pretend that they’re not lying to you anymore – they’re just repeating Big Lies (“total exoneration!”  “the matter is closed!”) in the fond hopes that they will drown out the truth.  They’re succeeding, at least with their base, which is only to be expected given the precedent of the last few years though the rest of us are not buying it.  Keep in mind, though, that this is about the 2/3 of the Report that we’ve been allowed to see.  The other third is probably a lot more interesting.  And there’s a lot more out there beyond the Report.

8. I need to read all of the rest of KJ Parker’s books.  I’m behind.  I just finished his most recent one and it was such a lovely thing to read a book from an author who knows how to write – how to put sentences together into stories.  This is a surprisingly rare talent.

9. One of the nice things about working is that there are times when you really can afford just a bit of retail therapy.  Fortunately my vices are inexpensive.

10. You should get up from your desk and walk around sometimes because you never know when someone might hand you free food, especially around the end of the semester.
Posted by David at 10:19 PM