A Story in a Photograph

We shall not cease from exploration,
and the end of all our exploring will be
to arrive where we started
and know the place for the first time.
-TS Eliot


Every so often I get back to the genealogy project.  It sits there in the back of my mind, a diversion from all of the various things that I need to accomplish in the course of a day, a distraction from the ongoing rush of events here in the waning days of the American republic.  It’s nice to have a project like that, actually.  You need that kind of thing.

It started a few years back when I scanned all of the family photos – several thousand of them, from tintypes through about 1990 – and sent copies of the scans to everyone in the family.  I was hoping that this would prompt people to write back with stories and memories, or at least correct the tentative identifications that I had given to people and places, but everyone’s busy and aside from my mom nobody ever did.  Oh well.  There’s still time.

That’s where things stood for a while, and then a couple of years ago I started looking into the documentary side of things.

The internet exists for maybe half a dozen reasons, one of which turns out to be genealogy.  You can find a shocking amount of information online, much of it for free and most of the rest for fairly nominal charges.  And if you happen to have been trained as a researcher – one of the skills that historians acquire in grad school, along with the speed reading and how to survive in a major American city on a stipend that your own department considers below the poverty line for one person – you can entertain yourself for a very long time.

Eventually things start to circle back.

This is my great-grandmother. 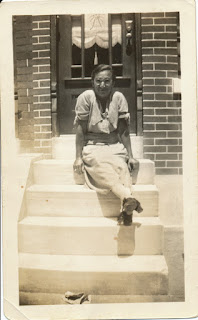 She’s sitting on what, having just checked Google Earth, are probably her front steps, sometime in the 1920s or 1930s.  She’s my maternal grandmother’s mom, and other than those facts and that she died about six months before I was born that was most of what I knew about her when I scanned that photo.

She was born in a small village in Sicily in the mid-1880s, a few miles west of Messina.  She came from a large family, most of whom came to the US at some point or other.  What’s funny is that her brothers and sisters appear in three or four different family trees that I’ve found online but she isn’t in any of them.  I’m not sure why.

She came to America in 1907, either already married or nearly so.  I know the exact day she arrived, as well as the ship she sailed on.  She arrived with my great-grandfather, though whether he had been here before and gone back to get her or whether they came together is one of those questions that doesn’t fit any of the stories the family has always told.  We thought he met her here.  She was also accompanied by her niece.  I found a photo of the ship.  It was originally built as a cargo ship around the time my great-grandmother was born, retrofitted for passengers not long after, and spent most of the first decade of the 20th century running immigrants between Italy and New York City.

She had a baby the year before my oldest great-aunt was born.  It was a stillborn boy.  She would go on to have five more children, of whom my grandmother was exactly in the middle.  All of them would outlive her.

She received $400 in death benefits from an Italian-American mutual aid society when her husband passed away in the late 1920s.  That was a pretty good sum of money then, though not enough to make up for the loss of income.  She lived with her children after that – the 1930 census lists her eldest daughter as the head of household, not her.  My great aunt would have been 21 at the time, and wasn't married until two years later.

According to my mom, my great-grandmother never did quite wrap her head around the idea of theater and insisted that the soap operas that she watched were real events.   She hated one particular character, and when the actress reappeared in a different role after the first character had died, well, comedy ensued.

She died of heart disease at the age of 80, which – coincidentally – is the same age at which my dad’s mother passed away.  Demographics wins every time.

She’s also the subject of what is, to my knowledge, the only real ghost story in my family, which I will leave for another time.

It’s interesting how much more that photo says now that it has a few stories to go with it.
Posted by David at 3:42 PM

This is great! In my view, the single most enthralling aspects of History are the little back stories like this. We should all be aware of the little tales of our family members, so that we can place ourselves in that living line of History.

I’ve mentioned before that my wife and I haunt old, abandoned cemeteries. One of the saddest aspects of that is the stark realization, standing in that empty place on a windblown hill. that there is no longer anyone who remembers these people, or anything about their lives. It is said, that we never really die as long as someone remembers us. So many humans live, survive, toil, achieve, and overcome obstacles, then die without a word ever recorded to mark their contributions, the context of their lives, or, for that matter, their passing.

At some point in the future, you and I are going to get some face to face time. When that finally takes place, ask me about my experience in the trenches of genealogy warfare. I fought the battle for a long time, but ultimately lost the war. Part of the nature of OCD is that if you are not very, very careful something like this genealogy thing can become all consuming. It is good that you can do this in pieces.

Please, continue posting this part of human history as it is revealed unto you, for it is not solely about personal family members, it is about the life and times of a fellow Human Being.

Historians are really, really bad at the little stories that make human life interesting, it turns out. As a discipline we excel at large trends, big movements, broad changes, the grand sweep of things, but the little things get lost way too much. I tell my students this, when we get closer to the present in my classes. Talk to your older relatives, to older people in general, because all those stories get lost otherwise. Write things down, because all those stories get lost otherwise. Historians can tell you a great deal about the big trends of the 1970s - nearly half a century ago, now - but they can't tell you what Thanksgiving dinner smelled like at your grandmother's house, or how it felt at the kids' table.

There's a great book by David Eagleman called Sum. It's a thin collection - not much more than 100 pages - of 2-4pp chapters, each one separate but thematically linked, describing some alternate take on the afterlife. One of my favorites was an afterlife where people sit aimlessly in a big hall until the last person who remembers them dies and they go somewhere else. Nobody knows where. Most people leave after a couple of generations. Some leave right away. Historical figures are stuck there, watching their story slowly diverge from everything they knew. I read that book almost a decade ago, and I think about it a lot even now.

Or, as an old professor I had once said, most people live in a window of maybe two generations on either side of them. After that, nobody remembers. It is a strange thought, how fragile memory is.

I look forward to that face time. I really do.

I have often thought that if I were to choose a motto for a new family crest of some kind, it would say just "I will remember." I think that's a worthwhile cause.

This is not the great grandmother I wrote about in Arrivals back in January, by the way.

There was a point in my youth, 1957? maybe it was 1958 when I had 2 grandmothers, and 3 great grandmothers still alive. That changed in less than a year. I have a clear memory of only one - my mother's maternal grandmother.

It's odd how we deal with all those people linguistically.

When I was in grade school I had three living grandparents (four if you count the one who my dad's mother divorced in 1940 and never saw again - he died in the late 70s, apparently). I remember all of them very well - we were and remain a close family, and the all three of them were still around when I started college.

None of my mother's grandparents were alive when I was born, though my dad had a grandmother who lived until I was about 7 or 8. All I remember about her is an old woman in a bed reaching out for me.

I'm trying to write all this stuff down while I can still remember it.

Kim speaks Swedish and apparently it's much easier to refer to specific grandparents in that language than in English. Languages are fun that way.