Well, after taking a year off to focus on other things, Lauren has decided to go back to the 4H Poultry Project, which means that for the first time since 2017 our living room now echoes with the sound of chirping. 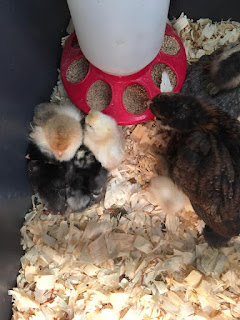 It also has that distinct chickeny tang that follows the introduction of poultry into an enclosed space by about 36 hours, but so it goes.  You get used to it.  They’re only going to be here until the weather warms up enough to ship them out to our friend’s barn with the rest of our birds, anyway.

I was not part of the Chicken Obtaining Expedition, since that required those involved to be at the fairgrounds a full county over by 6am on Saturday and the only reason I ever want to be up at that hour is to catch a flight to Europe and most airlines don’t let you take poultry on planes so those two things are rarely if ever going to coincide.  Plus it is still reasonably chilly out there these days – not really winter anymore, but not quite spring either – and my bed is such a warm and comfortable place.

So Kim and Lauren ventured forth.  They came, they saw, they poultried, and now we have nine [CORRECTION: thirteen - they're hard to keep track of] chickens in our living room.  After Kim and Lauren got back home they went out again to a different friend’s barn and bought turkeys so we had three of those in there too, in a separate bin.

They’re not even our turkeys.  We’re holding them for a different friend who is on vacation and will collect them at some point.

Although we’re down to two now.  Turkey poults are very fragile things, and one of them was sufficiently worrisome that our friend with the barn didn’t even charge us for him.  This turned out to be a good move.

When I came downstairs this morning I looked at him and figured he had died overnight and the only reason I didn’t bury him in the backyard right then was because I didn’t have my shoes on.  By the time I got my shoes, though, it appeared that the little poult was still struggling on [insert Monty Python joke here] so we kept him warm and comfortable and waited for the inevitable to happen.

He’s buried now.  He fought bravely, and if there is a next life for turkeys I hope it treats him better than this one did.

We’ll get our own turkeys on Tuesday, apparently.  Bronze ones rather than the whites we have now – they don’t show dirt as much, and if you’d like to give a 40lb bird a bath before Fair time go ahead but we’ll stick with the bronzes thanks – and for all I know the process will repeat for at least one of them.  For birds that get to be the size of beach balls they’re not sturdy at all.

Meanwhile we have a smorgasbord of chicken breeds randomly chirping in our living room, climbing on top of each other, and keeping the cats entertained.

There are many things that I find myself surprised to be doing at this point in my life.  I am always astonished at how many of them involve poultry.
Posted by David at 10:11 PM