1. I’ve had the same general winter crud for two weeks now, and it is getting old.  It has settled into a persistent cough the way they always do with me – if the next great pandemic is respiratory just say goodbye to me now – and it’s been keeping me up at night, cough meds or no.  This is not doing Kim any favors either.  Oh well.

2. Down at Home Campus we’re in the middle of switching over from one major academic software package to a different major academic software package that supposedly does more or less the same thing, and my mission this week has been to figure out a) what I need to access from the old package to do my job, b) what I can actually access in the new package, and c) how to square these things.  I’ve been going through all of the menus and submenus, systematically, and just clicking on things and so far I have not shorted out the power grid or launched any cruise missiles, so I figure I’m doing well.  One fascinating discovery during this process has been that I may have access to something in the new package that don’t think I had in the old one, except that I just know that if I tell them that they will go in with a chainsaw and not only take away that particular access but also everything remotely connected to it, much of which I actually do need to do my job.  Maybe if I just promise just to forget I ever noticed this – really, having it provides no benefit to me at all – they’ll leave me alone?  We’ll see.

3. Tabitha has been home from Small Liberal Arts College on spring break this week, and she asked if she could bring home a friend who didn’t want to travel all the way to Texas to go back to his home.  We figured why not – throw another dinner plate on the table and we’re good, really.  We have the space.  The other night we got into a conversation and he mentioned that where he’s from they have this thing called Big Tex, which is a 55-foot high animatronic statue by the state fairgrounds.  It’s, well, impressive. 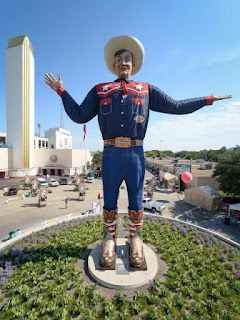 But what’s even more impressive, it turns out, is that a while back Big Tex burned down and I know that this is a terrible thing but it just looks like there should be two hobbits throwing a ring at it and I can’t really look away now. 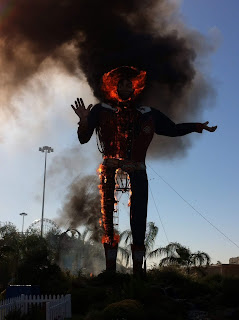 I may have found my new Facebook profile picture.

4. Phooey on Daylight Savings Time.  It just means everyone is tired and crabbier than usual, and it doesn’t even save any energy.  Seriously – we should just go back to Standard Time and stay there.

5. I have so much grading to do.  I really do not like grading.  I’ve never met at teacher who enjoys grading, and yet we all give out assignments and grade them because that’s how you get students to learn.  Sometimes I wish teaching was as easy and lucrative as right-wing critics always tell me it is.

6. Also, the next time some privileged whinger starts in on “pampered college students” I will go nuclear.

7. I actually managed to watch some television this week, which is kind of a throwback to old times for me.  I’m nearly through Season 4 of Game of Thrones now.  I saw the first episode of the new season of American Gods, which is quite possibly the most beautifully filmed thing ever put on the air.  Kim talked me into the opening episode of The Umbrella Factory, which was pleasantly strange.  And last night we watched a bizarre little thing called Disney Couples Therapy, which reminded me a lot of the old cartoon Fractured Fairy Tales in its insistence that “happily ever after” was a myth to be mined for comedy.  So yay me.

8. Also, for all my non-Wisconsin readers, I just want to point out that Neil Gaiman made up absolutely nothing about The House on the Rock when he wrote American Gods.  It really is like that.

9. It’s looking like this summer will be a “stay at home and let people come to us” sort of time, and I’m perfectly happy with that.  It’s nice when people visit.

10. It looks like we will be back in the Poultry Project again this year, with new chickens and turkeys to prep for the Fair.  I’m not sure how I feel about this.  On the one hand, they’re fun and I enjoy them (especially the turkeys) and the eggs are nice.  On the other hand, well, they require time and energy that is in short supply these days.  So we’ll see I guess.
Posted by David at 10:23 PM