Our Trip to Europe: We Explore Wevelgem and Kortrijk

Our first full day in Europe began fairly early, since we really had no idea what time it was.  That’s how it is when you wake up several thousand miles from where you usually wake up.  You can fight it or you can enjoy it and the second option just seemed so much better really.  Breakfast was lovely – fresh breads from the bakery, butter, jam, chocolate, and tea – and we sat at the table just sort of taking it all in, talking with Ilse and each other, and quietly marveling at the fact that we were actually in Belgium. 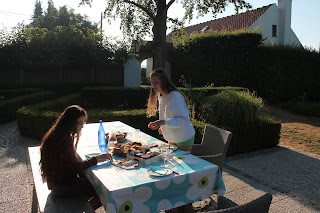 I never did figure out the shower at the B&B.

It was one of those high-tech water-and-energy-saving showers, and every day I thought I had it down and every day it turned out that I didn’t.  It took me two tries and a full explanation to learn how the hot water worked (short version: you had to keep the hot water volume at full in order to engage the water heater) and even then I still managed to do something wrong and it would get cold again.  The thing about this is that you go into the shower and try, and when it doesn’t do what you want it to you ask and get instructions, and that works until it doesn’t and then you ask again, and you repeat this process until finally you check out.  I took some quick showers at the B&B.

The shower in Tabitha and Lauren’s room was different, though, and they never did have any difficulties with it.  Oh well.  I never claimed to have any plumbing skills.

Fran and Roeland picked us up around midmorning and we headed into Wevelgem for a look around.

Both Roeland and Veerle grew up in Wevelgem, and it’s always interesting to see where people come from.  We’d be driving around the narrow, winding streets (well, I thought they were narrow because 1.  I live in the American midwest where residential streets can take up to fifteen minutes to walk across, and 2.  I hadn’t been to Cornwall yet) and they’d point to where their parents had lived or where Fran went to school, and to have a sense of place like that is a wonderful thing.

We parked in the center of town and got out to look around.

Wevelgem is a town of brick buildings with tiled roofs and ferociously squared off hedges (“for privacy,” said Roeland, since the homes are fairly close together).  Where Sweden is made of wood and England is made of varying kinds of stone, Belgium is definitely made of brick. 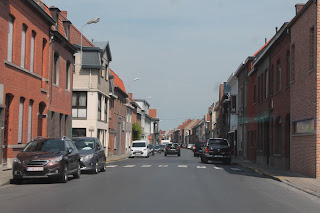 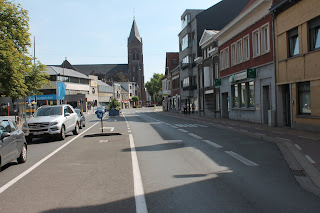 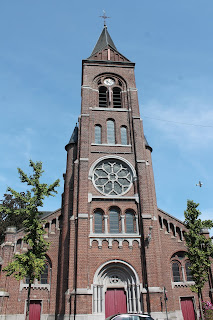 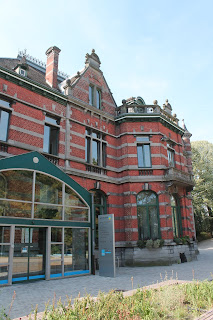 It was a hot day, as were all of the days we spent in Belgium – it got up to 38C, which meant that it was actually cooler inside my body than outside of it – so the first thing we did was go to the big park in the middle of town, which was leafy and still mostly green despite the long heat wave. 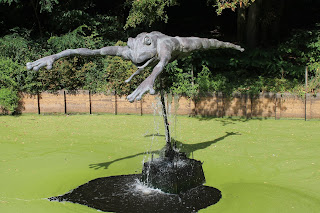 I loved this statue, mostly because it’s so self-confidently odd.  Super Frog!  You can tell how dry the weather had been, though, by the water level in the pond.  Usually the light brown area on the wall was underwater.

While we were in the park we stopped at the Bib – the local public library – where Roeland had an exhibit of his photographs on display.  He takes spectacular closeup photographs of insects, and we had a good time looking at them. 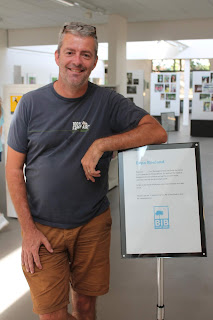 After that we mostly wandered around the town, eventually ending up at an exhibit dedicated to Vjenceslav Richter, a Croatian artist and architect who, among other things, designed the Yugoslavian pavilion for the 1958 World’s Fair. 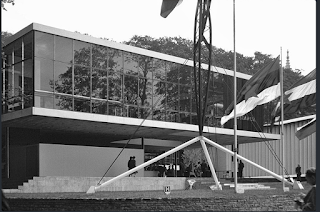 When the Fair was over, they took the pavilion apart and rebuilt it in Wevelgem, where it became a school – one attended by both Roeland and Veerle if I remember correctly.  They added a number of walls during the rebuilding process in order to make classrooms and lobbies, and it looks like this now. 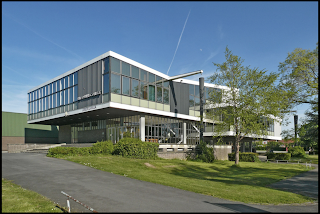 You’d be surprised at how interesting an exhibit on Vjenceslav Richter can be.  There was a timeline of his life and a pretty extensive collection of art works, and the guy who was running the exhibit clearly knew his stuff and was happy to tell us about Richter – and that makes all the difference.  As museum people, we had a grand time looking at the displays and listening to the stories.  It’s still an impressive building, too, even after all the years and changes. 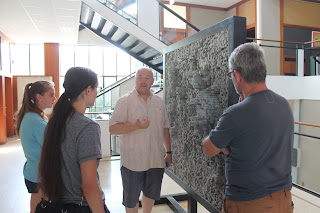 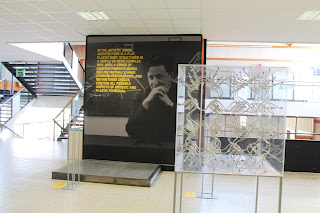 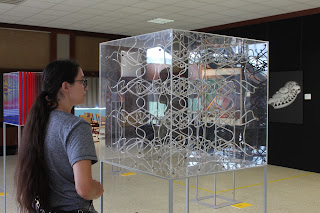 By this point it was getting on lunch time, so we went back to Fran’s house for food and conversation.  I’m always impressed by people who can speak multiple languages – none of my attempts at learning foreign languages back in school were very successful, and with the possible exception of my tendency to consume excessively large beverages my resolute monolingualism may well be the biggest thing marking me as an American.  I really should fix that someday.  There was a lot of English and Dutch flying about the table, and between it all we had a good time before heading off to Kortrijk.

Kortrijk is the next town over from Wevelgem, so close that there really isn’t any space between the two – you cross a street and there you are, I think, which reminded me very much of when I was growing up in the suburbs of Philadelphia.  I was probably 12 before I figured out that in most of the US there are spaces between towns, and in Wisconsin this is true to an exceptional degree (though not as absurdly so as in, say, Wyoming).  Kortrijk is so close to to Wevelgem, in fact, that since the car only held five people Roeland took his bicycle over.

We got to Kortrijk and met Roeland in the middle of town, by the Belfry, which is what is left of a medieval cloth hall.  Flanders was known for its cloth industry back then and you still see monuments to it, and from what I gathered belfries are very Flemish things. 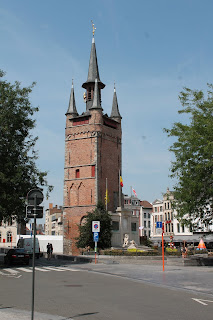 We went to the old City Hall. 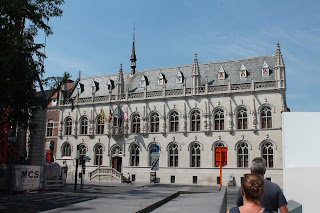 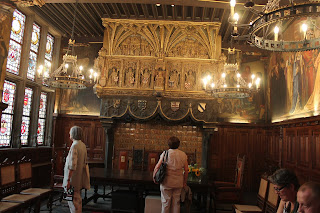 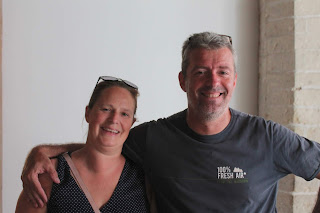 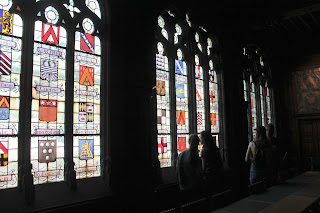 We wandered around a bit and spent some time at a candy store (Veerle had kept us well supplied with Belgian treats when Fran lived with us, and Tabitha was very happy to find cuberdons again), and then found the Broel Towers, which are probably the most iconic image of Kortrijk. 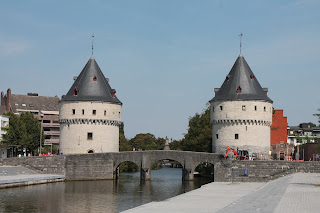 Built during the medieval period (at separate times), they have survived an astonishing amount of violence as Belgium was fought over by larger invading powers.  The bridge between them was destroyed during both 20th-century world wars, for example.  You forget, as an American, the cost of the world wars – for most Americans they are things that happened long ago and far away – but in Belgium they happened locally and people remember.  Much of Kortrijk was flattened during WWII because there was a Nazi airfield between it and Wevelgem that was a target for American bombers who were none too discriminating as to where those bombs fell as long as at least some of them fell on the airfield.  After the war the airfield was rebuilt and it serves as the local airport now – mostly for the small planes that we often saw taking off or landing while we were at Fran’s house.  There’s still a German war cemetery on the outskirts of Wevelgem as well, though we didn’t visit it.

The Towers are open to the public and you can just walk in.  The one on the right had more serious things in it. 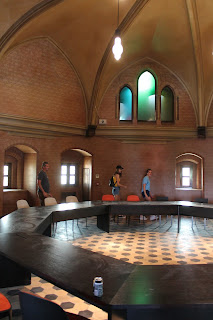 But the one on the left was more fun. 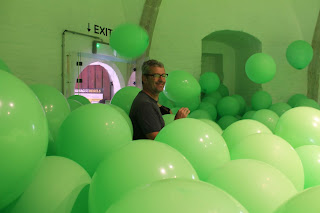 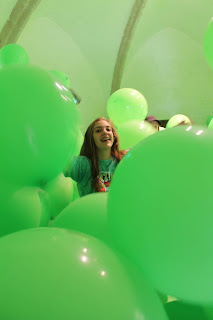 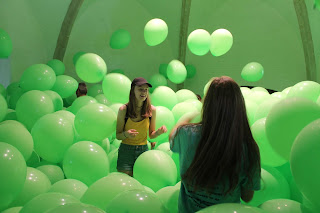 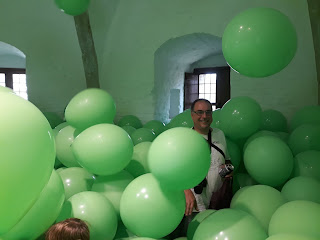 They even had an escape route planned out, should you need one. 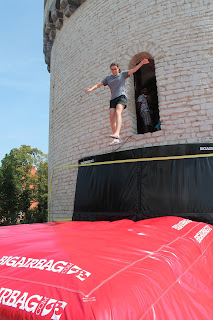 We spent some time wandering through the Beggynhof Ste. Elisabeth and the Church of St. Martin (Sint Maartenskerk), which were lovely. 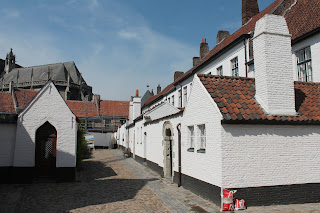 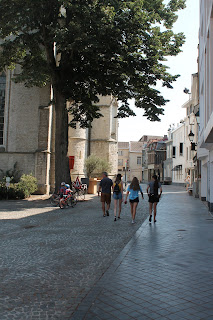 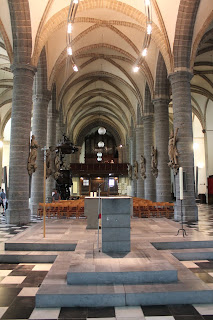 There was an ice cream stop in central Kortrijk, as well as a trip up to the second level of the local mall where we could look out over the town and get some nice views of the place. 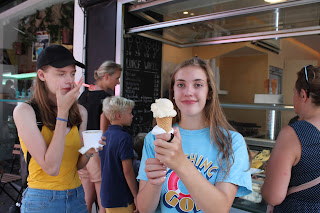 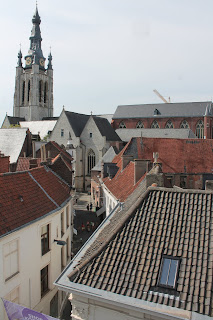 After that we split up, with Fran, Tabitha and Lauren haring off to explore the town a bit more while the Roeland, Veerle and I found a lovely little cafe and sat out on the terrace for a bit.

We don’t have terrace cafes much here in the US, and that’s a shame.  There really is nothing better than to sit at a table in a busy pedestrian square with something to drink and watch the human zoo parade by while you enjoy time with your friends.

That evening I made chili for dinner.  It is not easy to find the ingredients for chili in West Flanders, but Veerle and I made a valiant effort and if the chili was a bit sweeter than it usually is it was still pretty good.  We ate outside and talked and shared the evening together, and it was a lovely way to end a good day. 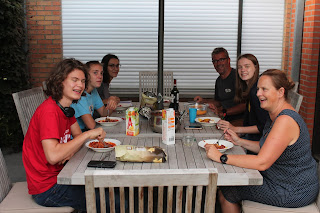 It was kind of a shame, therefore, that when I got back to the B&B I still had papers to grade from my summer class.  But that’s how it goes – I hauled those papers across the Atlantic, and they were going to get graded.

I wish I had some friends in Europe. But I do have another tenuous connection. My family went to the 1958 World's Fair and maybe it's just me, but I vaguely remember that building. There might have been photos of my family standing in front of it. I was only 7, but I remember, and I even have a souvenir spoon to prove it!

Having friends you can visit is a wonderful thing - I highly recommend it. :) It's even better when they come to visit you too.

That would be cool if you were there! It's an interesting building, especially given the history of what Richter originally wanted it to be versus how it came out. I love the fact that it's a school now.

Nice to arrive on a post written by a visitor on the two most important towns in my younger life. Wevelgem was the city where my mother was born and lived. I visited my grandparents living in Wevelgem weekly. Kortrijk was my town of birth and I lived there untill the age of 25.

I very much enjoyed Wevelgem and Kortrijk - they're lovely and interesting places, and our friends showed them off well. :) I'm glad that you enjoyed the post - it's always a good sign when someone who is actually from a place I'm writing about thinks I've done a good job!

And I misspelled your name. Sorry about that Bentenge!