Our Trip to Europe: We Fly to Belgium

It turns out that the hardest part of traveling to Europe was actually getting to the airport gate.

I let Kim handle all of the travel arrangements, on the not-unreasonable premise that I’d like them done correctly and I know very well that the chances of that happening decline sharply with every contribution I make.  If I want to avoid being stranded in Madagascar while my luggage is in Ecuador and my friends are waiting to pick me up in Brussels, it’s best if I just stay out of it.

So Kim fired up the Planning Machine.

She arranged conversations with all of our various friends overseas to make sure that this would actually work.  She scouted for tickets – no small thing, given that we ended up taking six different aircraft from between four and six airlines (depending on how one counted) to four different countries, with Kim departing several days after the girls and I left (for work reasons) and still coming home on the same plane as the rest of us – arranged parking for the car, and generally got things organized.

My job was simply to check the airlines for their food policies.

You’d think this would be straightforward.  Look at ticket reservations.  Find airline name.  Check website and/or phone customer support line to establish whether they would be serving anything that Tabitha could actually eat.  If yes, great.  If no, pack food.  Simple.

Except that when you use arcane and magical methods to book your tickets (or those travel booking websites that are so popular these days – there is precious little difference to me), you really don’t know who to call.  You think you do, but you don’t.

I wasn’t too worried about the short flights.  For an hour or two nobody has to eat anything.  It was the long flights across the Atlantic that I needed to clarify.  So I checked the reservations, which clearly indicated that we would be flying with FinnAir.  I found their website and discovered that even the English-language version was singularly unhelpful.  It did have a chat feature and a phone number, though, so I figured I could track down a person and ask my questions one of those ways.

After an hour on hold and another half hour waiting for the chat feature to connect to an actual person, I was eventually told that yes, the reservations did say FinnAir but the actual planes would be operated by American Airlines and I should get hold of them.  Thank you for flying with someone else.  Have a nice day.

American, it has to be said, was very responsive even if they didn’t tell me what I wanted to hear.  So we packed food.

On our appointed travel day we got into the car and headed off toward O’Hare.  We made it almost out of Our Little Town before some idiot cut in front of us and nearly ran us off the road.  There was much invective and more than a little speculation as to the ancestry, sexual habits, and recreational drug usage of both the initial idiot and the second idiot who had forced the original idiot to swerve in the first place, none of which was very helpful other than to make us feel better about the whole thing.  But after that things calmed down and we made it to the airport without further drama.  We pulled up to the International Terminal (Terminal 5) and Kim dropped us off.

The girls and I headed off to find our flight.

After some increasingly worried searching we located a small group of airport workers in bright reflective vests who helpfully pointed out that our flight was actually in Terminal 3 and we should take the bus over there.

This is why I get to airports early.

Once we found our gate, things went much more smoothly.  Our flight boarded on time, and we found our seats.  Lauren claimed the window seat on the flight out and immediately commenced fiddling with the buttons on both the entertainment console (a more powerful machine than any two arcades that I might have frequented in my misspent youth, combined) and the window, which had the net effect of turning the entire window a deep shade of near-opaque blue.  It took her the better part of a quarter hour to figure out how to undo that so she could see out the window again.  I don’t remember needing instruction manuals for windows before, but then I am old and my memory is not what it used to be.

They served us meals on the flight, and the flight attendant was a bit taken aback when Tabitha said no.  We explained that the airline had made it clear that they could not or would not guarantee her safety so we had brought food.  He seemed to take this as a personal challenge and went out of his way to try to find things she could eat, even bringing over an extra Kosher meal they had on the plane because everything on it was clearly labeled with its ingredients.  It was really nice of him to do that.

We made our connecting flight in London the next morning, and landed in Brussels in the late afternoon, where we went through passport control and got our stamps, much to Lauren’s delight.  As most of our traveling after that was within the EU, however, we didn’t get another stamp until we were back in the UK.  We found our bag and then headed off to the exit, where we were met by Roeland and Fran.

It was a joyous reunion with Fran, and a nice introduction to Roeland!

We headed out toward their home in Wevelgem (pronounced WEE-vel-hem), about an hour away in West Flanders, not far from the French border. 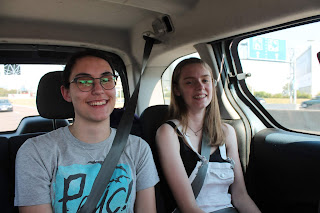 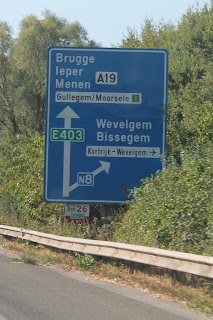 It was hot in Belgium – seriously, unseasonably hot.  Upper 30s Celsius / mid-90s Fahrenheit hot.  Most of Europe was in the grip of a heat wave that had lasted for weeks or even months by that point, and at the time we landed in Brussels it had not rained in Belgium for two solid months.  Also, nothing – nothing – in Belgium is air-conditioned.  They don’t usually need it to be, since it almost never gets that hot and certainly not that hot for that long.  And yet there we were.  You get used to it, though, and after a while it just becomes background noise.  We drove through countryside that was browned and baking and yet was still lovely.  I remember, through my jet-lagged haze, asking Roeland a lot of questions about the road signs, which were fascinating to me.

It stayed hot for the entire time we were with Fran’s family, but right after we left it rained for two solid days and the heat broke.  It’s much more seasonal there now.  We probably didn’t have anything to do with that, but we’re happy to claim the title of Rainmakers anyway because why not?  All hail the bringers of the wet!  It’s a talent we have on vacations.

We didn’t go straight to their house.  Roeland and Veerle generously put us up at a bed and breakfast on the edge of town, and folks – if you should ever find yourself in West Flanders and need a place to stay I most heartily recommend you check into the B&B Col del Vino in Wevelgem.  Ilse and Wim, our hosts, welcomed us warmly and showed us around the place.  It was gorgeous and comfortable and the breakfasts were exactly as you'd hope they'd be in a setting like that, and I’m looking forward to going back. 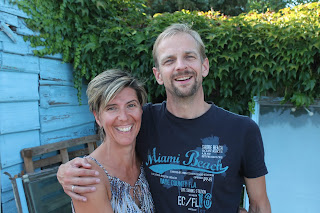 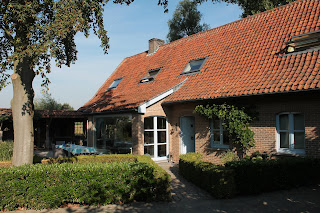 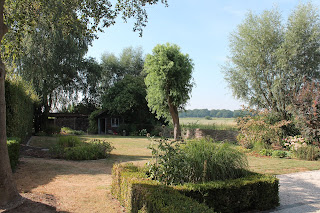 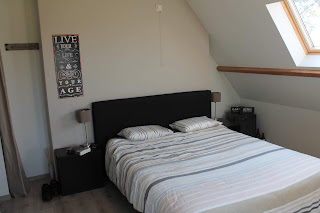 This was the view out of my window that night. 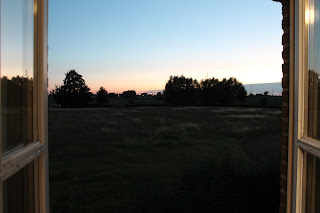 There were also chickens!   And a berry tree of some kind that produced big purple blackberry-like fruit that were juicy and sweet-tart.  I tried to eat all of them, which would not have been a bright idea but I did my best anyway because I was tired and it made sense at the time and they were really, really good. 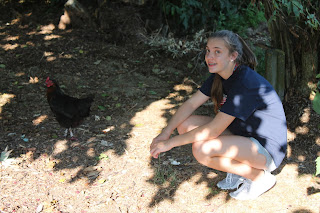 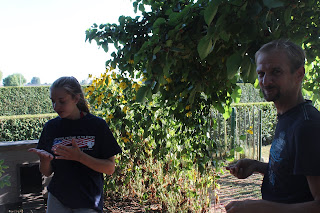 Fortunately I did not succeed, as our next destination was Fran’s house where we met the rest of her family – Veerle, Lien, and Niels.  Veerle had made a tasty Flemish stew for us and we sat down outside for dinner and conversation.

The best part of traveling for me is always the people.  To be welcomed into someone’s home, to share a meal, to sit around a table and trade stories and conversations, that’s a lovely thing.  We’d gotten to know Fran when she was with us, and now we were sitting around a table in Belgium with her family, getting to know them as well.

You know, life is good. 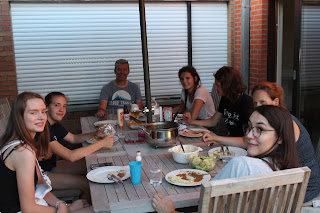 “There was much invective and more than a little speculation as to the ancestry, sexual habits, and recreational drug usage of both the initial idiot and the second idiot who had forced the original idiot to swerve in the first place …” This is the most incredibly accurate description of my daily routine that I have ever encountered.

Yes, it is. Indeed. And it is the people we encounter and with whom we share our lives that make it so.

Good to have you home safe and sound, my friend.

Glad to be home - thanks! We had a lovely time while we were away, but it is always good to sleep in your own bed.

I expect that in your line of work you get to run through that line of speculation a fair amount.

I am fortunate in the people in my life.