My How You've Grown

And so, even before the previous story really gets started, a new story arises.

We went out to the hibachi restaurant here in Our Little Town on Tuesday night.  Ordinarily this would not be particularly noteworthy – we like the hibachi restaurant, and while it is something of a treat rather than an everyday or even every month occurrence it is something that we try to do now and again.  The last time we were there was when we decided to show Fran the joys of eating at a place where the chefs cook right in front of you and try to burn off your eyebrows with massive fireballs, because what could be more American than eating somewhere that might kill you with a simple miscalculation?

The food is good, too.

Our motivation this time was a bit different.  It was Tabitha’s last dinner as a non-college student, and she requested it as her going-away meal.  How could we say no?

Wednesday morning we piled a fair subset of her stuff and a small refrigerator into the minivan and headed off to her new home at Small Liberal Arts College.  It’s not a bad drive really – far enough to prevent unexpected drop-ins by the parental units, but close enough so that nobody has to fly or ship anything and coming home for the holidays isn’t that much of a chore.  Lauren stayed home, as it is Band Camp down at Local Businessman High School and she really has had enough of traveling for the time being, so it was just the three of us making the journey.

Let me tell you, SLAC has this whole move-in thing nailed down.

We arrived a bit after 9am, followed the abundant signs and even more abundant brightly-dressed student workers and found a parking spot.  Tabitha’s first mission was to get Validated, which has nothing to do with your personal feelings or your parking receipt but is, instead, a check-in process at the Commons – you go in, get a sheet of paper with all of the things you still need to do highlighted, and pick up your student schedule before going downstairs to pick up the parent schedule (notably not the same as the student schedule), check in with the IT people to see if they can figure out why you need to reset your password every 6-12 hours, and fill out whatever paperwork was highlighted on the first sheet of paper.

All of this took maybe twenty minutes.

After that it was time to move in.  We went back to the car, followed a different set of signs and brightly-dressed student workers to a check-in point where Tabitha could get her dorm key, and then were separated into three lines of cars, one for each dorm served by that particular check-in point.  When it was our turn to head up what I suspect is normally a pedestrian walkway (which was still wider than half the roads in Cornwall), we ventured up the hill to the dorm where we were swarmed with yet more brightly-dressed student workers.  Within minutes our van was emptied and all of Tabitha’s stuff – neatly labeled with her dorm room number – was carted up to her room while I drove back down to the original lot to park again.

They also fed us lunch.  I have to say that SLAC has some really good food – this is the second time I’ve eaten there and it is a whole lot tastier than what I remember college food tasting like.  Kim was impressed by the ample provision of vegetables.

After lunch we parted ways, which was by design.  There is a reason why the parent and student schedules are different, after all.  SLAC does a very good job of slowly separating you from your child in order to lessen the trauma of the final parting and you have to hand it to them on that.  Tabitha went back to her room to finish setting up and continue getting to know her roommate, who seemed very nice, while Kim and I raided the bookstore for SLAC gear and then headed over to the theater for a parent information session which might as well have been entitled “Relax! You Will Be Fine!”

The Jeff Foxworthy-esque routine entitled “You Might Be A Helicopter Parent” just hammered the point home.

We left the theater and headed for a small group meeting with academic advisors – there were three advisors in our room and maybe half a dozen sets of parents, and we got to ask the advisors whatever we wanted while they explained how things work at SLAC.  It works differently from Home Campus, which made it interesting even for us longtime university employees.

The final event of the day was a small outdoor convocation/welcome ceremony.  The parents lined the main walkway across campus while a procession of students led by two bagpipers (what is it with American universities and bagpipers?) marched by waving and cheering.  They went to the right around the building at the end of the parade and we walked around to the left and we all met at the other side for a blessedly short little ceremony that ended with the students getting a big class photo from the overhead drone.

At this point the SLAC chaplain – a pointedly ecumenical woman – announced, “Families!  You will now have five minutes to practice letting your child go!  And then you must go.”

It is a strange thing to see your child heading off to a new stage in her life.  As a parent you remember – you remember the little girl, the school-ager, the young teen, and it’s hard sometimes to wrap your head around the fact that those are memories, that the mature young woman in front of you is moving on.  That’s what parenting is, of course – the steady process of making yourself less necessary to their lives while still being there for them when they need you.

“No little girl can stop her world to wait for me,” as Natalie Merchant once put it.

I remember being on the other side of that, not too long ago, heading off into the dorm after saying goodbye to my parents.  And now it was my turn to drive home, the miles slipping by and the house just that much emptier when we got back, and it’s not a bad thing really even if it is a change from the last eighteen years.

Do well and be well, Tabitha.  I’m proud of you. 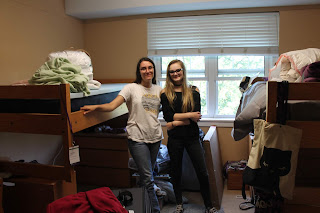 Wow, I remember my wife and I dropping our only son off at college out-of-state and then going home.

What a long, miserable drive home that was, what with all the sobbing and the wailing.

It finally got so bad my wife had to drive.

Our drive home actually went surprisingly well, which I credit to two things. First, that SLAC did such a good job of making the parting gradual so there wasn't One Big Goodbye at the end of the day. And second, that we were still pretty jet-lagged from our trip (from which we returned three days earlier) and were just too tired to put that kind of energy into wailing.

I suspect it won't really hit me full force until "dinner for three" becomes normal in our house.

Wait - Vegetables? Seriously? Oh, Kim! You’re kidding, right? I want to hear about the Porter House Steaks. Veggies? Okay, maybe you can put a baked potato with lots of butter on a side dish, but give me my steak and HOLD the veggies. /s

“I remember being on the other side of that, not too long ago”

I was, not too long ago (3 weeks or so) asked about an event that happened “not too long ago” in a way that actually forced me to sit down and count.

“Not too long ago” turns out to be sooo much longer than you remember when you discover that scientific notation is not just easier, it’s actually required. My how time flies.

”Our drive home actually went surprisingly well, which I credit to two things …“

You’re not doing well on this counting thing, are you? It was three things. First, and most important, Kim was driving, wasn’t she? HUH? HUH? HUH? (Surprised that James didn’t call you on that one.)

Unfortunately, “dinner for three” is just a glancing blow. That whole “full force” thing doesn’t come until it’s “dinner for two”. It will be on a Tuesday, in the early winter. Light snow will be falling, and …

Excuse me, please … California and Nevada are on fire, and there is a substantial amount of smoke in the air ...

Kim is ever the optimist. Tabitha was somewhat unimpressed with the broccoli, being accustomed to the stuff from our garden, but the mere fact that this observation was made is a good sign. I know you had the sarcasm font on but I'm really hungry for a steak and baked potato now...

Yeah, "not too long ago" is a relative measure I suppose. Compared to, say, the American Revolution, it was just yesterday! It certainly feels that way.

OUTED! We split the driving home (I drove down) though Kim did most of it. :)

We still have a few years before that early winter Tuesday, and I'm going to enjoy them while I can. It's amazing how far that smoke has reached.

Smoke here has been really bad - Bad enough that it triggered another Emphysema attack for my wife, another two or three days in hospital, but she should be back home today or tomorrow. One fire, about 80 miles north of here has burned 92,000 acres and is blanketing Northern Utah with dense, acrid smoke. Nevada's Sweet Revenge.

On an entirely unrelated note, thought I'd share this little story. There are very few better examples of Why I Drive:

That's a great story. It's things like that that give you hope for the future.