We went up to Madison last night for a trivia contest because that’s just how we roll.  And because it was for a good cause.

When we signed up for this, way back in the dark ages of March we had no other plans for the evening.  Tabitha and Fran said they’d like to go, but Lauren wasn’t interested so she begged off.  We sent in our team fees – which were significant, being a fundraiser after all – and made plans to meet our friends Heidi and Travis (as well as their friends Erin and Greg) for a festive evening of brain work and high class munchies.  Then it snowed last week and the schedules got all rescheduled and suddenly we had another thing to go to last night.  After some discussion we kept to our original plan and Lauren went to the other thing and everything worked out just fine.  We lead busy lives these days.

The event itself was a lot of fun, as these events usually are.  Everyone gathered in what was once a restaurant in Madison but is now a catering business.  There was a table full of food – falafel, beet salad, veggies and dip, squash ravioli, homemade hummus and pita, the sorts of things one finds on the side of Madison whose culture was set by the university rather than the state government – and a silent auction.  There were maybe a dozen teams, many in some kind of event-specific clothing – our team being “Bands on the Run” we were supposed to come in a concert t-shirt except that I have never met a band whose shirt I wanted to buy so I ended up in my Schoolhouse Rock shirt, which I figured was close enough.  A couple of local DJ’s donated their time and talents, so the announcing was top notch if rather persistent (you’re not on the radio!  you don’t have to fill dead air!).  And a good time was had by all.

We came in fourth because we lost the tie-breaker for third, which was a pretty good result in that crowd.  I don’t know how much help I was, to be honest, since a lot of the questions were about popular music (there was an entire category of “first lines of songs” to which I knew the answer to exactly one question all night) or television.  Tabitha actually guessed the correct origins of Yahtzee, which I thought was impressive.  Next year, we’ll be ready!

No we won’t.  Next year, if they do this again next year, we’ll go and eat the snacks and have a good time and probably do about as well as this year and it will be just fine.

They probably will do it again next year, too.  They raised a decent amount of money for the cause, after all.  The organizer has two daughters who were diagnosed with EDS, a connective tissue disorder that honestly I had never heard of prior to this event.  She pointed out that in the last 365 days they’d gone through 83 doctor appointments, 2 emergency room visits and 1 hospitalization, which she said was actually doing pretty well for two EDS patients.  The money went to the local EDS foundation, so perhaps it will do some good there.

What struck me, having Fran on the team, is just how achingly American this is.  Here we were, a community coming together to support each other for health care that is prohibitively expensive here but provided out of tax dollars as a human service in every other industrialized nation on earth, a lesson this country refuses to accept – and for many Americans, actively rejects – because Reasons.  It says good things about us as a nation that we are willing to put these events on, and it says rather cautionary things about us as a nation that such events are necessary and will continue to be necessary for the foreseeable future.

So we gather and we celebrate and we answer trivia questions, and the beat goes on. 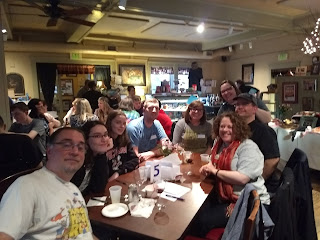 Since you brought it up, here be a fun and nearly useless music trivia trivecta:

Name the tune,
the Artist(s) and,
for extra credit and an opportunity to play the bonus round (not to mention just impressing the hell out of me ...)
the album on which it can be found.

Members of the audience are invited to play along.
[Oh, yeah, on this one, no cheating! Google is not your friend. You either know this or you don't.]

In this universe (at least), there is and can be, no higher purpose for trivia than raising funds for a good cause.

Well, I'm out. There is no conceivable universe in which I would know the answer to any of those questions without reference material to fall back on. See the post, re: not very useful to the team.

I'll look forward to seeing if anyone else wants to take a shot at your question!

Okay, cool. We'll give it a few days and see if anyone can "Name that tune".

Title: The Morning: Another Morning

Album: Days of Future Past

I was in a band in college, which is something everyone should do as it is a great deal of fun and requires no actual talent. There were three of us in the core band (and another two in the electric version), and we often had long philosophical discussions about the importance of lyrics. Jack and I came out of musical traditions where lyrics were essentially meaningless - just ways to get the notes out (Jack came out of jazz, I came out of choral music). Robbie was a folkie to whom lyrics were everything, even more than melody.

I still have no real head for lyrics.