A Night to Remember

It was Prom Night here in Our Little Town once again.

I’ve always loved Prom Night, ever since I went to my own back in the Stone Ages of the 1980s.  I had a lovely time, what can I say?  Things are different these days, in a lot of ways, though not so much in others.

For one thing, there is a whole lot less emphasis on couples than there used to be.  At my Prom you had to be part of a couple, whether an Actual Couple that had been dating for a while or a Prom Couple that got together that night (either on a date or, as was often the case, as friends who were pretending to be a couple so they could be part of the fun).  Now?  They sell single tickets, and a lot of the kids who go are just there to hang out with their friends.

I think it’s nice that people have the option now.  I certainly enjoyed going as part of an Actual Couple, but for a great many reasons not everyone has that option and it seems churlish to exclude them from what should be a night of friends and fun.  Score one for the current generation, I say.

For another thing, the dresses that the young ladies wear are much more adventurous than the ones that were available in my day, and you know what?  Good on them for having the confidence to wear them.  People should be comfortable in their own bodies.

For yet another thing, at least here in Our Little Town, the Prom is not limited to the seniors.  In fact, it seems designated for juniors though anyone can buy a ticket and go.  My Prom was just for the seniors and their dates – which meant a great many sophomores, since by tradition every other class seemed to date each other in my school.  I wonder if they still do that, or if that has also gone by the wayside.  Lauren explained it to me when I asked.  “Homecoming is for seniors, Dad,” she said.  “Prom is for juniors.”  Well, huh.  Now I know.

Also, when did Prom lose the definite article?  We went to “the Prom,” but people today go to “Prom.”  Is that a regional thing that I just noticed when I moved to Wisconsin, and if so, where is the line?  Ohio?  Or is it a time thing that happened between the 80s and now, and if so when?  1993?  Was it a Thursday?  So many questions.

On the other hand, a lot is the same as far as I can remember.  The excitement of an evening out with those you care about.  The opportunity to dress up and act older than you are – older than you’re usually allowed to be, even.  The fun stuff before and after.  The vaguely pleasant feeling of exhaustion the next day, because you know that nobody's going to sleep until they have to.  There’s a nice continuity there.

This year it was Tabitha’s time to go, and Fran went as well because she was not about to travel all the way to an American high school and not go to the Prom since that’s something very American.  Tabitha went with her friend Teresa – another exchange student, from Spain – and Fran went with her friend Sierra.  They were joined by Delanie and Scott, and we all went over to the park for pictures because you can't not have pictures, and then they were off. 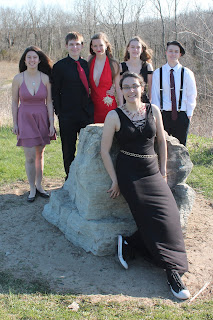 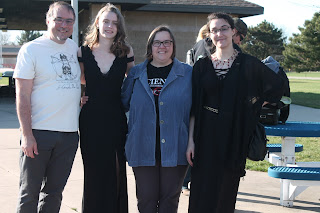 So much of parenting is just looking at the same things from the other side of the table, after so many years.

They had a good time, from what they said – Fran said it was a lot like the movies – and I’m happy for them.
Posted by David at 7:58 PM