In the Middle of Our Street

My mom moved out of the house today.

It was time, really.  A four-bedroom stone house is a lot of structure for one person.  My parents had been talking seriously about moving out even before my dad’s health declined.  It all got put on hold after he passed away.  That only accentuated the basic problem of Big House for Small Population, though.  That’s a lot of house to take care of.

My parents had talked about moving out of the old twin home I grew up in for a couple of years before that, though I didn’t want to move at first.  I liked that little house.  But eventually the prospect of having a bedroom you don’t have to share with your brother became just too irresistible for both me and my brother, and so we dropped whatever opposition we might have had.  I don’t know if he even had any opposition, but there you go.

Moving day was chaotic, as I recall.  We weren’t going that far – maybe a mile as the crow flies.  We stayed in the same schools and even kept our old phone number in an era when this was a fairly uncommon thing to do.  It was the last day of February and I got to stay home from school to help out.  The movers did most of the transporting, but we had family come with their cars to help move the things that we were especially concerned about.  And later that night, once the dust had settled, my dad and I went back to the old house after the new people had moved in (for some reason I still recall their names) and fished out our cat.  She had fled in a panic at the sight of the first mover walking into her home.  My dad knew exactly where she was and figured she’d be safer there than if we tried to get her, so he left her until we could go back later with some boiled ham slices and tempt her out of the little space between the cellar wall and the joists holding up the kitchen floor, to the right of the window facing the alley.  That had long been her hideout.

I got chicken pox a couple of weeks after we moved, so I stayed home from school for a while.  It gave me a good chance to explore the place and make it my own.  I remember being particularly enamoured of the closet in my parents’ room, which sloped up toward the rear to allow for the staircase just beneath it.  I thought that was pretty cool.

It was nice having my own room, too.  It was my own space to invite in those whom I wished or just to have for my own, and I liked that.  It faced the rear and, if I had wanted to do so, I could climb out my window, walk across the roof of the family room, and step onto the hill in the back, which went up from there.  The cat did that a lot, as I recall.  I talked my parents into painting the walls turquoise.  My brother got the other rear-facing room.  My grandmother had the room over the garage, which almost made it cool enough for her, though she ran her air conditioner pretty much constantly from April to October anyway.  The big room went to my parents, of course.

One thing about the place that always gave us stories was the fact that the street behind us had the same name as our street and the same street numbers, though the house at our number on the other street was in a different county.  For a while the people who lived there had a last name that was only one letter different from ours.  We got their mortgage.  They got our picnic table.  You could always tell when the new mailman came on by the catalogues that ended up being dropped through the mail slot.  And delivery vans?  Forget it.  After a while you got used to seeing them crawl up and down the street looking confused (since not every address had a corresponding address on the other street) and learned to flag them down and explain things to them.

There are a lot of memories in that old house.  Friends.  Girlfriends.  Family.  Events across the calendar and across the years.  We celebrated and mourned and welcomed, we shared and ate and laughed.  As you get older the ghosts get more numerous, more accommodating, and less fearsome, and you find yourself surrounded by them just walking through spaces where things happened.  They’re good company on quiet days.

My brother has been there for the last couple of days, helping my mom with the last of the packing and the first of the moving.  He posted this photo last night.  “A cat in the window since 1979,” he wrote. 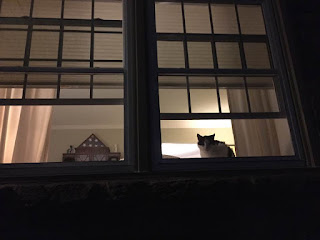 There will be a new family in there soon, and perhaps they will have as good a run in that house as we did.  I wish the new family well.

A house is built of wood and stone, but a home is made of love.  And if you are very lucky in this world, they are one and the same.
Posted by David at 5:26 PM