Oh, the irony of being called “historically illiterate” by Dinesh D’Souza.  It’s enough to drive a sane person to drink.

This bit of sheer unadulterated nonsense came across my Facebook feed today while I was innocently searching for news of my friends’ lives. 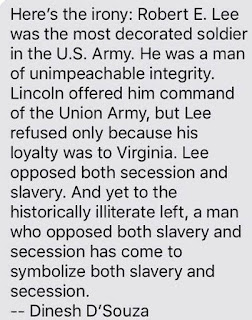 Let’s just say, for the sake of argument, that the characterization of Robert E. Lee presented herein is accurate.  That he was a man of “unimpeachable integrity” and that he opposed both secession and slavery.  That he was a man of sufficient military skill that Lincoln wanted him to command the Union Army.  Sure.  Why not.  The job offer is objectively true, after all.  Let’s just start with that.

Here is the great lesson that Mr. D’Souza, a man whose own integrity is thoroughly impeachable, is trying to have you ignore with that little rant of his:

You are what you do when it matters.

Your opinions, your beliefs, your previous record, are all irrelevant when it comes to crunch time.  You can say you oppose things, you can say you have integrity, you can wear all kinds of ribbons and medals and trinkets on your chest, you can be offered whatever job by whomever is offering, but the bottom line is that you are what you do when it matters, not what you say when it doesn’t and not what others say about you at any time.

Lee had a clear choice.  He could follow through on his supposed beliefs that slavery and secession were wrong.  He could uphold the oath he took as a military officer in the United States Army “to support and defend the Constitution of the United States against all enemies, foreign and domestic, [and] bear true faith and allegiance to the same.”  He could act with “unimpeachable integrity” and defend what he said he valued.

Or he could commit treason in the name of upholding human slavery.

The record is clear.

Lee, like so many of his southern fellow-travelers, chose treason.  He chose to support a pretender nation whose sole purpose was the perpetuation of human slavery (and if anyone is here tempted to give me the failed “states’ rights” argument for secession, please be advised that I am in fact professionally historically literate – malevolently so – and I will not be polite in dismissing your hallucinatory views as the revisionist trash that they are).  He chose to take up arms against the United States, to invade its territory, and to kill its citizens.

And he did so knowing full well what it meant.

It is the historically illiterate who refuse to see this, who choose to whitewash this crime and insist that Lee is somehow a figure to be honored by patriotic Americans.  Treason is not honorable, and all the slavering nonsense spilled in its defense can’t change that.

You are what you do when it matters, and Lee chose slavery and secession.

To say otherwise is historically illiterate.
Posted by David at 4:04 PM

malevolent |məˈlevələnt|
adjective
having or showing a wish to do evil to others: the glint of dark, malevolent eyes

Okay, you win. Nice word, malevolent. One eye short of a violent male. Seriously can not wait for the show to begin.

Let me get the popcorn ready - do I need to buy a ticket?

Oh, and about that honorific in front of D’Souza's name - I do not believe he has ever earned the right to be referred to as Mister.

You just slipped out of polite habit, I think?

Unless you were being sarcastic.

You were being sarcastic, weren't you?

You sly little devil, you!

No ticket necessary - the show opens when necessary and closes abruptly.

Sarcastic? Not necessarily. Politeness to folks like that just confuses them, and I find that entertaining.

It seems to me that it's also worth noting that Lee had a third choice if he was truly torn between his oath and his regional loyalties: he could have stayed home and sat out the war. (Compare to the modern Republican who could have voted for Kasich if Clinton was a step too far to keep Trump out.)

Also, while it's not exactly inconsistent or hypocritical of him, I always have to mention that "anti-slavery Lee" had zero hesitation riding in front of a Union army to quash insurrection when it was John Brown trying to launch a slave revolt from Harpers Ferry. I'm sure that can be ascribed to his love for Virginia, too, but it still seems to me that he was on the wrong side of not one, but two revolts.

I don't blame Lee for the John Brown thing. Brown, for all that he was arguably on the correct moral side of things, was in fact fomenting rebellion against the United States and Lee's sworn duty as an officer in the US Army would have been to crush that. The US military's response to John Brown at Harper's Ferry is an example of the tragedy that happens when two rights collide.

Lee joining the secessionists and spending four long years fighting to preserve slavery is an example of what happens when someone chooses wrong over right, however. The great irony of it all in light of your comment is that not two years after stepping in to crush a rebellion against the United States, Lee stepped forward to lead a larger and more destructive rebellion against the United States.

That is neither honorable nor moral.