It’s a difficult line to walk, really – far more so than most people credit.  To be able to conjure up the slow, aching sadness behind some of life’s happiest times and have your audience feel both sides of the moment when it all comes into focus is a high and underappreciated art, one that Keillor has been practicing for decades now.

He was in rare form last night.

I’ve been listening to Keillor since I was introduced to A Prairie Home Companion back in high school.  He’s retired from that show now – for real this time, at age 75 – but for decades Keillor’s slow, wandering stories of Lake Wobegon, Minnesota (“Where all the women are strong, all the men are good looking, and all the children are above average”) have kept me company on Saturday nights whenever I could remember to listen.  There were skits, songs, and long rambling stories, and it made for a perfect way to spend a couple of hours.  He also did the advertisements, since old-time radio shows should have ads and there aren’t any on public radio.  My personal favorite was always the Fearmonger Shop (“Serving all your phobia needs since 1954”) though Ralph’s Pretty Good Grocery (“If you can’t find it at Ralph’s, you can probably get along without it”) is right up there too.

Some years ago I managed to spend some time in the Fitzgerald Theater in St. Paul, where the show originated.  My position as the Performing Arts Guy down at Home Campus entailed going to the Arts Midwest Conference a couple of times, and they put a lot of the showcase performances there.  But I’d never seen Keillor live.

My friend Dave had an extra ticket to see him in Madison, and he offered it to me.  Of course I went.  We had a grand time.

The event was held at Breese Stevens Field, which is a dual-purpose athletic field in the heart of the city whose lines are painted for both soccer and, because this is Madison, ultimate Frisbee.  Unless you sprang for the picnic basket – which cost roughly the GDP of Lithuania, contained wine, cheese, and probably the deed to a fair-trade coffee plantation somewhere hot, and came with picnic seating – you had to bring your own chairs.  It was a cheerful and friendly crowd, though, and I note that my presence there did nothing to alter the average age of the attendees. 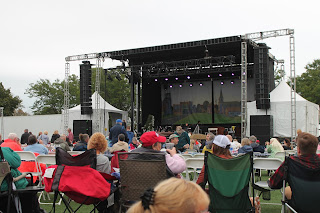 Keillor came out rather formally attired for a grey, occasionally rainy, and slightly chilly autumn evening. 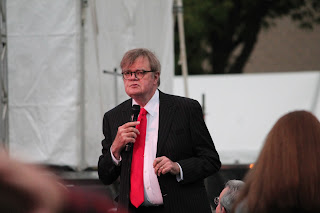 He wandered through the crowd singing a mournful and at times laugh-out-loud funny song about being from Minnesota.  The poor techs up in the spotlight tower had a bear of a time keeping him in light, especially when he drifted right underneath them (those spotlights can only depress so far), but they did a good job and yes I am precisely the person who notices the spotlight operators thank you very much.  Eventually Keillor wandered back up to the stage, where he introduced the show as “the Prairie Home Companion Refugee show.”  And that’s pretty much what it was.  If you’ve ever listened to the show, it had all of the singing and stories, though without the skits.  It was lovely. 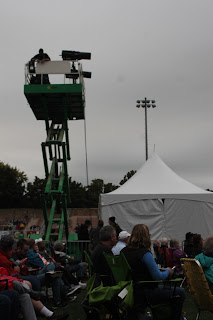 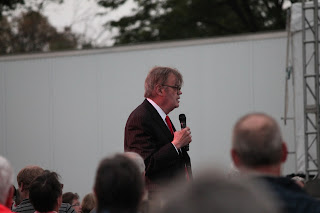 He had his band, all of whom are superlatively talented, and they did a long selection of the kind of Americana music that PHC was known for.  Heather Masse of The Wailin’ Jennys sang many of the songs with him, and even did a solo piece that was straight jazz torch-singing, which I have always loved.  Fred Newman was the sound effects guy (“foley,” as my daughters are at pains to correct me these days). 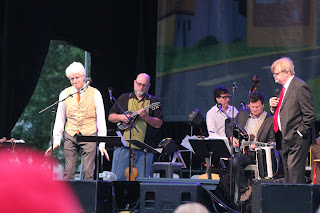 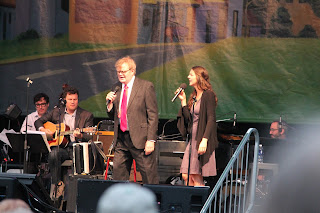 Newman and Keillor did a couple of the stories that they always do, where Keillor tells some long rambling tale and Newman has to do the sound effects on the fly.

“He went into the Lutheran Church”

“No, those were Catholic bells.  These were Lutheran bells.”

What really impressed me most about Newman was that at one point he was playing a Jew’s harp – an instrument I taught myself how to play back in college, and if you want to get some strange looks try walking around a college campus idly practicing on a Jew’s harp – and while he was doing that he began singing a Beatles song, though in a slightly minor mode that gave it a lilting melancholy air.  And then he began whistling, all the while still twanging away on the Jew’s harp.

Do you have any idea how hard that is to do?  Color me impressed.

But the best part of the evening, as expected, were the monologues.  He actually did two of them, one before the intermission and one after.  They were linked, but separate and very different in tone.

The first one was my favorite, a tightrope act of sorrow and delight there in the dark in Madison.  It’s hard to tell where Keillor’s life leaves off and his Lake Wobegon stories begin anymore, and it’s probably best not to worry about the dividing line.  He’s 75 now, a fact he alluded to several times last night, and his story centered on going back to Lake Wobegon for the funeral of the first girl he ever truly loved.  It bounced back and forth between the events of the funeral itself and the story of how he came to know this girl, how she invited him to the prom, and how they ended up parked up by the cemetery later that night, this achingly beautiful and funny moment of young love in the front seat of a ’55 Pontiac set against the backdrop of this grown-up woman’s memorial service.  Back and forth, back and forth, building up and digressing, wandering around and back to the point, laughter and sadness all swirled together in one, as it always is, really.

I’m old enough now to appreciate this story more than I might once have done.  It’s been a long time since high school.  You lose people as you get older.  The memories remain happy ones, though, and that balance, that bittersweet melancholy joy, more and more becomes who you are.  It’s a complicated thing, this world, and it can be a beautiful one if we let it.

The second half of the monologue was funnier, in that “slowly creeping absurdity” sort of way where each individual step of the story makes perfect sense but about halfway through you realize you are in a thoroughly ridiculous place and wonder how you got there.  Let’s just say that lakes, weddings, ash-sprinklings (particularly involving green bowling balls dropped from a parasail by young men in red Speedos), hot air balloons, and pontoon boats full of both barbecue grills and Lutheran ministers don’t actually mix very well and leave it at that.

At the end of the show he got the audience to sing along to a few songs of leave-taking, including one of my favorites – “Goodnight, Irene” – before we all drifted back into our lives.

That’s all the news from Lake Wobegon.