So the eclipse happened.  Was it good for you?

It was cloudy here in Wisconsin, so mostly it just looked like twilight or one of those storms that you head into the basement to wait out.  It got dark.  It got light.

Once in a while the clouds cleared off enough to let us see the actual eclipse.  Kim ordered a bunch of those eclipse glasses so Tabitha and I were well prepared as the time came.  We sat outside and let the darkness fall, and whenever the clouds broke we’d snap on our glasses and take a look.

I even risked a brief photo, because why not.  It’s only dangerous if you stare at it, and a quick glance isn’t going to do any harm.  People look at the sun all the time.  Only during eclipses do they think they can stare at it, though.  So here’s what it looked like in Wisconsin, about 10 minutes past the peak of it all. 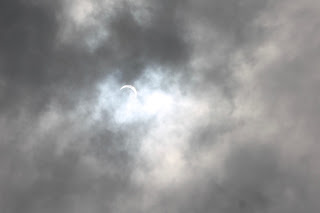 I was smart enough not to buy any plants, because I know what happened the last time someone tried that.

This is not my first eclipse, though I don’t really remember the first one.  In my defense, I was in kindergarten at the time. 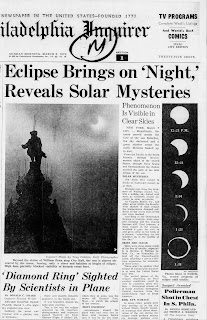 I remember my parents talking about it with us, and I think they just kept us inside while it was going on.  You can’t really tell a kindergartner not to look at something and expect them not to look at it.  If we had been outside during the eclipse I can pretty much guarantee you that I’d be blind today.

We did gather around afterwards, though, my friends and I, out by the green mailbox on the corner of our one-block-long suburban street.  That was one of our hangout spaces back then.  We had a lot of them in that tiny little neighborhood: the big rock on the Mean Old Man’s property at the top of the driveway, our various front lawns, the driveways that bisected our blocks behind all of our houses – I never did understand how people could build blocks without common driveways running behind all the houses – and so on.  But the green mailbox – one of the ones that the mailmen used for storage rather than the blue ones that you could actually drop letters into – was a favorite.  It was on the corner so you had good visibility, which meant that most of your friends could see you a long way off.

It was nice little neighborhood.  There weren’t too many kids we didn’t want seeing us – only one that I can recall specifically, and he tended to plague other places.  We were all glad when he moved away to become someone else’s problem.

So there we were, out by the mailbox, discussing the events of the day once they had subsided.

We did that.  That’s where we met to discuss the aftereffects of some giant Chinese nuclear test that rumor had it would spread radiation around the world in a big wave that was timed to hit Philadelphia at some point.  We stayed in for that and discussed it after, though what good that did I have no idea.  It’s not like you can stare at radiation.

I don’t remember what we said, out there by the mailbox.  It was an eclipse.  It was unprecedented as far as our short lives were concerned, and we had nothing to compare it to.  We'd seen it from the windows of our various living rooms.  It looked like twilight or a big storm, though we didn’t go into the basement for storms then.  Tornados generally don’t happen in Philadelphia.

It got dark.  It got light.

"In my defense, I was in kindergarten at the time."

Seriously??? You kindergarteners really need to get off of my [sagebrush covered lot] lawn.

This was actually my third. And, it was okay - we're a couple of hundred miles from the path of totality, only about 85% coverage - didn't have glasses but did have my less than satisfying pinhole projector.

We were about at 85% or so as well, and I thought it was pretty cool.

I know how you feel. The students I will have in my university classes this fall were born in 1999. Sigh.

My Great-granddaughter is starting 2nd grade in less than a week.

I never understood my grandmother when she would say, "How the hell did I get so damned old?" until I found myself saying it.

On the other hand, that's pretty cool about your great-granddaughter, though! I'm going to focus on the positive there, because I need that sort of news these days. :)

It should probably be understood, at this point in the game, that I'm still a few years away from retirement - not exactly wheelchair bound - at least not yet anyway.

But each day I encounter people who, by the very fact of their existence in this universe remind me that I am also no longer young.

... irritating. (If not outright annoying.)