One of the nice things about living in Wisconsin is that I’m not all that far from Madison, so whenever they have interesting things to do up there I can always just drive there and do them.

Not that I actually do them most of the time, of course.  I’m much more likely to sit quietly at home and think to myself, “Huh, that would have been an interesting thing to do” than I am to actually go and do the thing, and why Kim remains married to me in light of this is an interesting question that I hope she does not spend too much time considering.  But the option is there, and that’s important.

I liked living in Philadelphia and Pittsburgh for much the same reason.  It’s always nice to be surrounded by interesting things, even if you actually get to only a small fraction of them.  It’s good to have options.

Every year all kinds of authors come to Madison – a university town, after all – for readings and such, and every year I don’t actually go to many of them, if any.  I’ve seen Patrick Rothfuss, for example – and if you ever get a chance to do that I highly recommend you do so – but most of them slip on by me.

But it’s been a hectic couple of weeks for any number of reasons, only some of which involve the sorry prevalence of domestic white male terrorism in this country, and when I saw that John Scalzi was coming to Madison today I thought, “That might be something worth actually doing rather than just thinking of doing.”  It would be fun.

I first stumbled into Scalzi as a blogger, actually.  Back in 2007, another blog I was reading at the time posted a link to his visit report to the Creation Museum – an epic account that remains worth reading even now – and I was so taken by his writing that I read through all of his old posts.  In order.  And when I got to the end of those and realized that there were still older posts elsewhere, in an internet archive, I went and found those and read them as well.  In order.  Because that’s the kind of nerd I am.

He’s been writing that blog since 1998, by the way, often posting daily.  And I’m still reading it.  In order.  This has been much easier since 2007, actually, as I read the posts as they come up instead of binging them long after the fact.  I'm sure there's a lesson in there somewhere.

Only after all that did I end up reading his novels.  Agent to the Stars remains my favorite, though The God Engines – an altogether atypical work – is right up there.  I have enjoyed the Old Man’s War series, as it is light and well written and has some good ideas worked in there to make me think a bit.  Redshirts was a lot of fun, in a “Six Characters in Search of an Author” kind of way, though it is the codas that make it really worth reading.  And so on.  I’m actually a bit behind now, since he publishes books more often than I get around to reading them, but I always enjoy his stuff and I’ll get to it all in time.

So tonight Kim and I went up to Madison to catch John Scalzi on his latest book tour.  He has a new book out entitled The Collapsing Empire, which looks like fun and which I will no doubt read in short order.

We had a lovely time.

He read from a couple of pieces, neither of which was the book he was supposed to be promoting – as he pointed out, that crowd already has the book, either purchased earlier or, like my copy, purchased at the table on the way in, so promoting it would have been kind of redundant.  Instead, he read the first chapter to the sequel to Lock In, a book I still haven’t read but will now move up toward the top of my to-read pile.  And then he read a marvelously funny piece from his blog – one of the Christmas stories that he writes some years.  There were questions afterward – notably whether he considers NASCAR drivers to be athletes (the question made sense in context) and what books of his are currently optioned for movies or television (spoiler: a lot of them).

And then came the book signing.

For one thing, I get to hang out, however briefly, with someone whose work I enjoy, and authors are usually happy enough to see you that they will spend a few sentences talking with you before you have to move on and give the next person in line a chance.  It’s nice that way.  I told him that I’d read his entire blog archive, and I’m not really sure he knew what to make of me after that.  I’m not really sure either, sometimes.  I guess we’re even.

For another thing, you get to show these authors that they do in fact have fans, which seems to cheer them up and encourage them to write more, so that’s win all around, I say.

He was gracious and personable, and he signed all three books that I bought as well as the one I brought with me.  He talked with me and Kim and even posed for pictures.

So it was a good night. 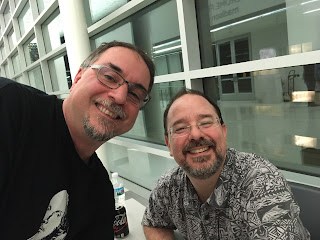 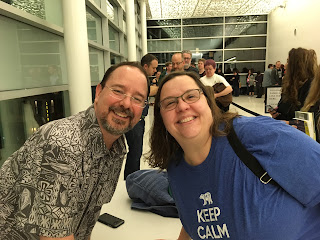 I saw John Scalzi last week here in Dallas, the first time that I've been able to see him in person. Terrific guy, and great political commentator too. Sometimes I'm not sure what to think about a political issue, and then Scalzi will blog something about it with his typical sardonic wit, and my position will snap into focus.

I'm looking forward to it - I read the first couple of pages while I was waiting for the event to start last night (they had it for sale on the table going in and I figured I might as well buy it while it was in front of me) and it was interesting. I'm going to have to reread those, as it was hard to focus on the page amid all the hubbub and I think I missed a few cues, but that's not such a bad thing really.

He does have a way with words. I don't always agree with him (usually, but not always), but even when I don't he makes me think and that's worthwhile right there.