Galileo Galilei was born in 1564, at a time when the Renaissance was giving way to the Scientific Revolution.

Neither of these things were very popular with the Catholic Church, which was an institution that, in the middle of a century of Reformation, Counter-reformation, and religious warfare, had any number of ways to make its displeasure known and every incentive to do so.  And, perhaps inevitably, his scientific views brought him into conflict with the most powerful institution in what is now Italy, where he lived.

In particular, it was Galileo’s defense of the Copernican theory of heliocentrism – that the earth moved around the sun rather than remaining stationary while the heavens spun around it – that bothered the Church.  Oddly enough, Copernicus’ work wasn’t all that controversial in the late 1500s – Pope Gregory XIII used it to help him create the Gregorian calendar in 1582, the calendar that all of Western Civilization uses now – but in the 1600s religious opposition to heliocentrism became more pronounced and vitriolic.  The Church declared heliocentrism “foolish and absurd” in 1616 and declared it to be heretical, and Pope Paul V ordered Galileo to abandon his position that heliocentrism was physically true, though he could discuss it as a theoretical idea.

When Pope Urban VIII, a friend and admirer of Galileo, came to power in 1623, Galileo resumed writing about heliocentrism.  Unfortunately, his writing angered the pope, and in 1632 he was brought to the Vatican for trial.  He was forced to recant heliocentrism, committed to house arrest for the rest of his life, and saw his book banned.

According to tradition, after being forced to deny the science behind heliocentrism and affirm that the Earth was stationary, Galileo muttered under his breath, “E pur si muove.”

Deny science all you want, but the facts don’t care.

This is a valuable lesson for modern America, as we find ourselves saddled with an administration whose assaults on science are only just beginning.  Indeed, the GOP war on science has been ongoing since the administration of Bush Jr.  Here in Wisconsin, as in several other GOP strongholds, all mention of climate change and other ideologically inconvenient facts have been scrubbed from official websites and documents and further investigations banned.  It’s gotten so bad at the federal level under der Sturmtrumper that federal scientists are copying data and storing it in hidden places to avoid years of taxpayer-supported research being destroyed in the name of partisan politics.

Deny science all you want, but the facts don’t care.

So today, across the nation, we marched in defense of science.  Americans who understand the importance of acknowledging reality, of investigating facts, of basing policy on data rather than wishful thinking, and who recognize the critical importance of science to our economy, our military strength, and our future took to the streets to protest the debasement of American civil discourse and the ongoing GOP war on science.

Kim and I went up to the march in Madison, since that was the one that was close by.  Naturally we brought signs. 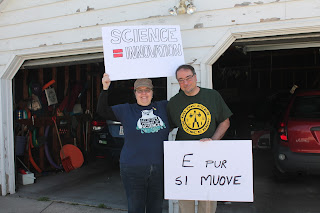 Kim’s was a bit more straightforward than mine, of course.  On the back it said “Science = National Security,” and between the two messages one would hope some light would go on in the heads of the science deniers, though I wouldn’t hold my breath.

Being the historian, I went with the Galileo quote.  I was pleasantly surprised at how many people got it – Madison is a university town, after all – and at how many people who didn’t get it took the time to ask me the story behind it.  The back of mine requires a bit of explanation.

The Catholic Church long ago made its peace with heliocentrism.  And the current Pope – Francis – has repeatedly made public statements confirming the reality of climate change, evolution, and the Big Bang, statements that have angered the American right wing.  If there is anything more grimly amusing than listening to right-wing hucksters lecture the Pope on religious doctrine I’m not sure what it might be.

This is why the back of my sign simply said, “The Pope is now more enlightened about science than the US government.  Think about that.”

I can’t tell you how many people stopped me for photographs of that.  It warmed my heart, it did.

It took us a while to find the park where the march started, since it’s not one we usually go to, but we ran into someone who was headed in that direction and he was happy to walk with us.  The park was nicely crowded, and there was a band playing.  Of course they ended up playing Thomas Dolby's "She Blinded Me With Science."  Don't be silly. 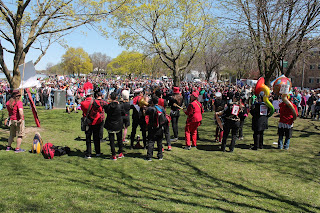 I even ran into another Galileo fan. 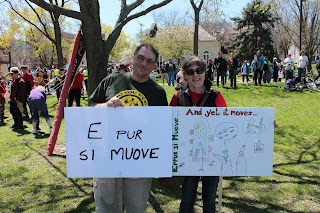 Eventually we found a couple of friends.  One of the local tv stations interviewed the lot of us briefly, and it will be interesting to see if we end up on the news. 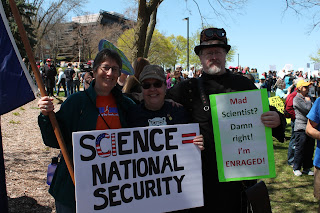 We lost them when the march began, as Kim and I were waylaid on the way out of the park by someone from the student radio station who wanted to interview her.  I got a few comments in as well, so that was nice.

The march wound its way through the streets for a while – there were several thousand people marching, so it took a while.  Most of them had clever signs and there was a festive air to the whole thing.  Madison is perhaps the politest place in the world to have a demonstration. 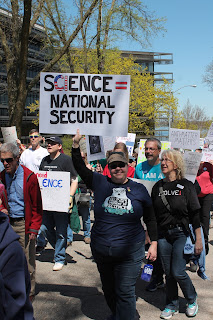 Eventually we ended up at the Library Mall, where there were speakers who were no doubt interesting but frankly it was mid-afternoon and my blood sugar had crashed an hour earlier so we headed up State Street and found some lunch. 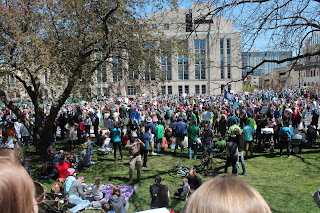 I have no illusions as to the effects of this march.  Der Sturmtrumper will not magically gain an appreciation for the crucial role that science plays in making this country great, in promoting our economy and our society, and maintaining our strength.  He will not back off his attacks or stop promoting the aggressive ignorance that got him elected.  His party won’t make any of those changes either, since their base finds reality inconvenient and won't reward them for acknowledging it.  There has to be more than just marches to make these changes.

But we march anyway.  And the message is simple.

You are on the wrong side of history, morality, and American values.

We will make sure you are forgotten.

I was unable to make the journey to the nearest march. Ended up sealing the living room floor in anticipation of the new hard wood flooring coming soon to a common area near me.

Love your sign. Would have loved to see a photo of the rear. (I'll skip the joke here.)

However, I need to point out a serious error in your post:

"We will make sure you are forgotten."

NO. You, a historian, should recognize the folly of forgetting these clowns and what they are in the process of, and, more importantly, capable of doing to harm this Republic.

We will make certain you are NOT forgotten!

We will record your names, we will vilify you in our histories, and will endeavor to never allow you or your ilk into power again.

We must always remember the lessons this period in our history are teaching us at this very moment. The survival of the Republic demands nothing less. Forgetting that is pretty much what got us here in the first place.

As to the "Sleep well" - I doubt my ability to do that through the nightmare of the next four years - but I will certainly endeavor to heed your advice.

Keep the torches burning and the powder dry, my friend.

I go back and forth on that.

On the one hand, you're right - the people who are doing this to our republic need to be vilified, and those stories need to be told as warnings to future generations. As a historian, that's my job.

On the other hand, a) there are always some who take those stories as models (note the resurgence of neo-Nazis both here and in Germany), and b) what those people want is to be immortal - consigning them to oblivion is the worst thing imaginable for them, and I like to dangle that fate in front of them as often as I can.

When I say, "Sleep well," I am addressing der Sturmtrumper and his ilk. It's much as a leopard would sidle up to a chicken in the daylight and remind him that the night belongs to cats, not birds. Sleep well, my fine feathered friend, and try not to think of the sunset.

Will take under advisement.