It’s coming up on Easter, and you know what that means?

No, it probably doesn’t mean we’ll actually get to church.  If there is an attendance requirement to get into heaven we are pretty much boned.  I suppose I could make an argument that at least we’re not being Pharisaical about it all, only showing up on the High Holidays and preening to the world about our virtue even though we don’t come on the regular days, but I’m not sure how much weight that carries either.

We just try to be good people and hope that is enough.

Instead, it means we’re about to be inundated with sugar.  Easter Sunday is the one day a year where it is socially acceptable to eat chocolate for breakfast.  We load up the baskets beforehand and then chow down in a frenzy of glucose that would be enough to give entire villages diabetes in the Old Country except that this is MURCA, the land of the 44-oz “medium” soda with free refills, so our pancreases (pancreii?) are tough as burnt leather and can handle it, at least until we explode from obesity.

You have to have life goals.

We’ve pretty much conceded the whole Easter Bunny thing except as a rhetorical device now – it was fun while it lasted, but everyone is old these days and understands the concept of “two-for-one sales down at Walgreens” – so we can be pretty open about the process now.  Kim and I will set up a basket for each girl and then let them have at it.  There will, of course, be a tax.  Those who set up get paid, after all.

This is a far cry from what I remember as a kid.

My parents were never big on the Easter Bunny.  To be honest, my dad wasn’t all that big on Santa either – “you bust your ass all year to be able to afford some nice things for your kids and then some fat guy in a suit gets all the credit,” I believe was his basic position – so the idea of a rodent breaking into our house and leaving stuff for us was just not going to fly.  So on Palm Sunday we’d all gather around and spend the afternoon dyeing eggs and filling the baskets with candy.

And then the baskets would go on the dining room table, where they would sit.

There in the open.

A certain amount of jellybean attrition was acceptable, within limits, but none of the big stuff was allowed to disappear.  It was as close as I got to Lent, I suppose.

And then Easter Sunday would dawn and we’d go to church, and once we got home all bets were off.  My brother and I would fall on those baskets like locusts on a wheat field, and it would be glorious.  The highlight, of course, would be the big egg in the middle.

The big egg in the middle was usually about the size of a baseball, more or less.  It was dark chocolate on the outside and a sticky coconut filling on the inside, and there was a sugar icing flower perched delicately on top.  Back in the day there was also a silver foil leaf stuck in the flower.  You’d peel off the flower and eat it, saving the foil leaf as a souvenir or just tossing it, depending on mood.  And then you’d slice the egg crosswise, each quarter-inch-thick slice to be savored and drawn out as long as possible.  Sometimes you could get the egg to last an entire week, although that generally took more self-restraint than I had.

I’m a sucker for chocolate-covered coconut, what can I say?

I tried to explain this to Kim once and she looked at me as if I were more deranged than usual.  Apparently these big eggs did not exist here in the midwest.  Maybe they were a Philadelphia thing, but they certainly were not a Wisconsin thing.  We’re usually in Wisconsin for Easter these days, and it has been so long since I’ve seen one of those eggs that I started to think I had just hallucinated them.

I spent some time in Philadelphia a couple of weeks ago, however, and on one of my grocery runs I found a display rack full of those eggs. 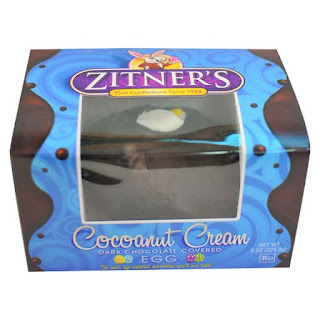 Of course I bought one.

I haven’t eaten it yet.  I put it on my desk right where I could look at it every day while I worked, because Tradition, that’s why.

On Sunday, I am going to eat the sugar icing flower (pausing momentarily to mourn the missing silver foil leaf, which has apparently not survived into the 21st century), and slice off a few bits to savor.  I will toast the Old Days.

And then, well, no doubt I will spend the rest of the day in a sugar coma.  I’m sure that’s in the Easter liturgy somewhere.
Posted by David at 9:52 PM

."...at least until we explode from obesity.
You have to have life goals.
We’ve pretty much conceded the whole Easter Bunny thing except as a rhetorical device now – it was fun while it lasted, but everyone is old these days ".

Exploding from obesity has always been a goal I tried to avoid. Failed, but at least I tried.

Nothing to see here folks, move along.

Move along. Just an old fart lost track of his youth ...

PPS: You really need to stop writing down my memories and posting them on your blog. I thing they crawl that poaching. (Hate my spell checker. Hate, hate, hate.)

I get the same way about trying to figure out how old I am. There was a time when I just knew, down to the half year. Knew it in my bones. This ended when I was around 8. Then I knew down to the year, which lasted into my mid-20s. Then I knew down to parts of decades, which lasted into my early 40s. Now I have to do math, and I am always vaguely surprised at a) the answer to my calculations and b) that old fart staring back at me from the mirror. There used to be more hair on top of that reflection, didn't there?

Don't know about the hair thing, I've pretty much had the same hairdo since they shaved my head in basic training at Lackland AFB.

My sister called a few weeks ago, to reflect upon the fact that, had he lived, that day would have been our father's 100th birthday. Milestone. Or perhaps millstone, because it got me doin' the math. I am now
nearly 3 years older than my dad was when he died, making me the longest lived male on my dad's side of the family. He died back in '78 at the ripe old age of 61. Has it really been 39 YEARS???

Weird. In my teens, I never thought i would ever live to be as old as my dad - and he was in his fifties at the time.

It's odd, but had your dad & mine met out there in the real world (and a whole bunch of other circumstances lined up) I'm quite certain they would have become fast friends. The whole E-bunny & Santa thing in this post brought back a rush of memories that could best be described by the word ...

You're probably right about that - it would have been good to see.

One of the things that I inherited was a brass mug that my brother and I got my dad when he turned 50, which seems like an age ago. I'm now 51. That's a strange thought indeed. Everyone's moved up a generation - my mom is now where my grandmother was, I'm now where my dad was, my kids are where I was. So many people live on as memories now, who were part of my life.

It's melancholy, but it's a good kind of melancholy. I'll take it.