All my docents are getting married.

I used to run a museum.  It was a great place, and you should go there sometime.  I spent five years there as the executive director, and then continued to give tours for years after that.  I haven’t given a tour in a while now, but Tabitha has upheld the family honor and taken over that role.  She’s been a docent for two years.  The place kind of gets in your blood.

I left the museum just about the time that Facebook was starting to become popular outside of its original college-student audience, and when some of my former docents discovered that their old boss was on Facebook they friended me and I was happy to accept.  They were good kids.

We’ve kept in touch over the years.  We’ve shared invitations, cartoons, political jokes, historical discussions and reminiscences (for a while I had an impressive if honorary title in a Facebook group devoted solely to alumni of the museum, which was a neat thing to have), and even had lunch once or twice.

One of the things that adults tend to do, given time and opportunity, is get married.

I like weddings, really I do.  They’re happy events where people can come together and be good to each other for a while.  They remind us that there is love in this world and that sometimes it is enough.

Nic got married this summer, in a lovely service in one of the historic buildings here in Our Little Town.  It was right above the music store, which doesn’t do the place justice – if you like 19th-century spaces you’d have liked this one.  I’m pretty sure it was a lyceum originally, and it was a great place to have a wedding.

Unfortunately that weekend was one of those increasingly common times when my life insisted on collapsing inward on me – not for anything serious, but just enough to make me frantic with all of the things that needed to get done.  And my camera battery died.  Seriously, it was just one of those days.

I had to skip out on the reception, but I did make it to the wedding itself.

Rituals are important, and it matters that you show up for people.  It was important to me to be there when Nic and Jesse got married, and I was.  I didn’t get to go to the party afterward, which was sad, but I was there for the ceremony.  And I did get one kind of okay picture of them walking out together, which made me happy even if Nic’s eyes are closed.  A lot of marriage is knowing when to keep your eyes closed and hoping your spouse does the same for you, I suppose. 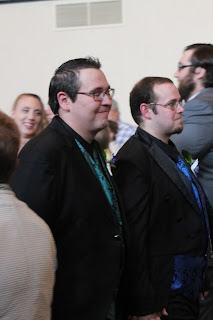 I wish Nic and Jesse a long and happy life together.

Today it was Cathy’s turn.

The service was in a church up in Madison, and it was also lovely – full of music from friends and relatives of the happy couple, and the priest did a nice job of making his points without beating us over the head with them.  I appreciate that.  It was a fine thing all around, and I got to be there when it mattered. 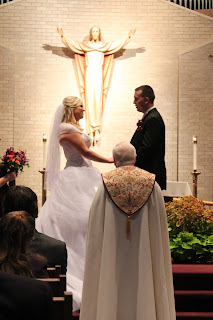 And wonder of wonders, my world remained uncollapsed so we got to go to the reception too.  Kim and I had a grand time – there were many inside jokes about the museum, as is only proper – and we enjoyed talking with the folks who ended up sitting at our table.  The food was good too.  Win all around, I say.

And I wish Cathy and Matt a long and happy life together as well.

Next up is Lauren, whose wedding is tentatively planned for not too long from now, really, even if it seems far away.  It comes up fast.

It’s nice that they invite their old boss to these things.  I’m glad that I’m still part of their lives, and that I get to see them so happy. 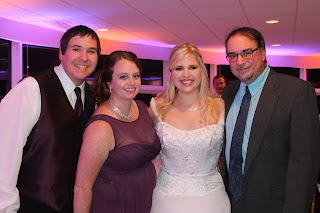 It is perhaps an interesting observation that I've never had a supervisor that I would want anywhere near my personal life.

This says something about you.

I have found that if you treat people well, they tend to respond in kind. I'm not sure why this isn't more widespread.