Voices from the Past

My grandmother would have been 103 today.

The ghosts accumulate, as you get older. 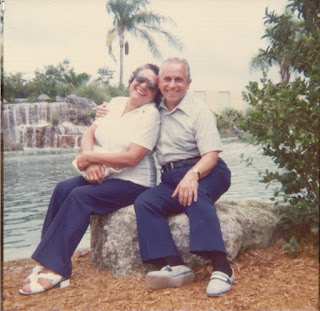 It’s 1974 in this picture, and they’re probably somewhere in St. Louis.  There are a couple of other photos that go with it, including one with a Mississippi River sternwheeler, and another that has the Anhauser-Busch brewery in the background.  She’s 60 in this photo, and since it appears to be summertime my grandfather is either 61 or 62 depending on whether his birthday has happened yet.

They had been married for 35 years at that point, and they still smiled like that in photos together.

They’ve been gone for a while now, and the thing that you discover when people you love pass away is that you never really get over it – you just get used to it and get on with your life, because really what else can you do?  You treasure the memories and try to keep those alive, and you keep moving forward.

That’s what they would have wanted anyway.

Sometimes, though, the past comes rushing back at you.  And this can be a lovely thing.

When I was in college, back in the 1980s, I took a class on 20th century history.  It was the fall of my senior year, and one of the big projects in that class was to do a paper on how the Depression and WWII impacted people here at home.  So I took my trusty little cassette recorder over to my grandparents’ house and interviewed them for about an hour and a half.

I still have the tape, even if my cassette recorder fell apart decades ago and nobody even remembers what cassettes are anymore, let alone makes cassette players.

Except that somebody does still make those players, and for a nominal fee they also provide you with software that will convert those old cassettes into mp3 files.  I’ve been meaning to do that for a while now, and a couple of weeks ago I finally decided to spring for one of those little gizmos.

They’re really easy to use, it turns out.  You install the software, put a few batteries into the player, hook the player to the computer with a micro-USB cord, swear at it for about half an hour, and you’re good to go.  At least that’s how I did it.  Your mileage may vary.

And then I got to hear voices I haven’t heard in a long, long time.

They talked about the Depression and WWII, of course, but also about their own lives and thoughts, about what they did during those years and after, and – for the last ten minutes or so – about my freshman roommate, who had come over for Thanksgiving dinner a couple of days earlier.  They liked him, as did pretty much everyone.  You couldn’t help but like Gervase.

It was odd, in a way, to listen to that tape, but it was lovely too.  I remembered doing that interview – where we sat, some of the things that were said – and hearing it again, bringing those people I loved back, if only as voices on a tape, was a wonderful thing.  At some point I’ll get copies out to the various folks in my family so they can share that experience too.

As a historian I know that you cannot live in the past.  I’m a professional.  Trust me on this.  But it is a nice place to visit now and then, and the company is good.

Happy birthday, Nana.
Posted by David at 9:28 AM

One of my most prized possessions is a CD containing nearly a century of home movies and family photos, dating from the early 1930's. My mother narrates the entire thing (it's about 8 hrs long). While Mom is still with us (she's pushing 97 (!)), I know she won't live forever and I treasure the thought that I can 'visit' whenever I like.

That's so cool! I'm glad that you got her narration, especially - photos and movies are about memories and stories, and without the stories they lose a lot of meaning. I've been late on a lot of that, but I'm working to make up lost ground. :)