Lauren has been taking Chinese as her foreign language for the past couple of years down at Mighty Clever Guy Middle School.  She chose this on her own, actually, which I thought was a brave decision.  And it’s nice that they even offer it down at MCGMS – it certainly wasn’t an option in my middle school.

As part of this, she was given the opportunity to host a Chinese exchange student this weekend.

Apparently a whole bunch of them are here for a couple of weeks, shadowing students at a couple of schools here in Our Little Town and generally getting a sense of life here in this country.  Honestly, they could have timed this better and done it after the presidential election nonsense has calmed down a bit, but on the other hand there’s not much they could have done to get the concentrated essence of MURCA faster than be here now.  So I guess it’s a wash.

Regardless, we volunteered and ended up with Xia.

We’re pretty sure that’s her family name, since the Chinese put that first and the given name second rather than the other way around like Westerners do, but that’s what she told us to call her.  It’s pronounced more or less “TsyAH” only you have to do with the proper tone the way the Chinese do, and Lauren spent the better part of the weekend telling us we weren’t doing it right, which is a distinct possibility.

At any rate, she was a very nice young lady, reserved in the way that Chinese culture tends to see as a virtue (as opposed to Americans, who start at Loud and go up from there), and fluent enough in English to make herself understood.  She was willing to answer to whatever approximation of her name we could muster, and that was nice.

Seriously – how do you go from Chinese (one of the most difficult languages in the world to learn) to English (another one) or back?  I have no idea.  I’m impressed by anyone who tries it.

We picked her up at MCGMS on Friday afternoon and got her situated at home before heading straight back out to chickens.  Because that’s what you do, of course.

She liked the chickens.  She got to hang out with Whitney, our Rosecomb bantam hen, and then Lauren introduced her to the barn kittens. 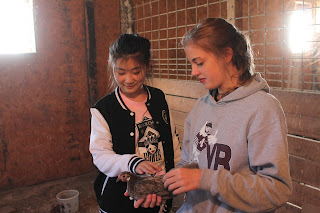 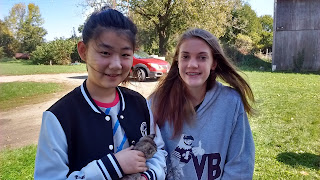 That night the two of them went to the MCGMS sock hop, where by all accounts they enjoyed themselves.  Lauren was quite perplexed by the concept of a sock hop (“Did they really do that back in the day?”  “Yes, my child.”) but a good time was had by all.

Saturday morning we introduced Xia to her first bagel, and then went to the local farmer’s market, where we also introduced Xia to the fact that Americans spend most of their free time eating and the rest of it searching for things to eat.  But when that includes minidonuts, hot chocolate, and cheese curds, well, you have to hand it to us.  We got it going on.

We also went back to the chickens.  You have to do the chickens every day.  Chickens are very demanding that way.

Saturday was also the day for Uncle Dave and Aunt Karen’s annual pre-Halloween bash – an overnight festival of food and fire, with a haunted trail and a bonfire.  We try to go every year, and this year it just happened to coincide with Xia’s visit.  It’s in Michigan, but if there is one thing more American than the search for food it is the road trip.  Often you can combine them, which is just about peak MURCAN.

So we packed half our house into the van, stuffed Lauren and Xia into the back, and headed off.

Tabitha stayed home this year.  She decided to go to the Homecoming dance with some friends, and while this meant we wouldn’t get any photos of the occasion, well, so be it.   She had a great time, and everyone made it home safely.

We got to Michigan with no troubles, and as soon as the car stopped moving Lauren jumped out, dragged Xia with her, and headed off into the swarm of kids that always runs around the place.  Dave and Karen’s cabin is way, way out in the middle of nowhere as far as this city boy is concerned – it is literally on a swamp (excuse me: “wetland”) – so there is no harm in letting them run.  Americans prize self-reliance as a virtue in children, so we let them go.  And they enveloped the newcomer as if she were an old friend.  We’re a good culture that way, most of the time.

For their part, the adults mostly sit, talk, eat, and drink, and there’s nothing wrong with that as far as I can see.  There is in fact a haunted trail that winds its way through the wetland, because of course there is.  They put a lot of time into it, and by all accounts it is a grand thing.

It was nice to see everyone again.  We’ve been doing this for a long time now, and you get to know people even if you only see them once a year.

The highlight for me is always the bonfire.  They build it up to monstrous proportions and then let it rip – nothing is going to burn that wasn’t meant to (vide supra, viz. “wetland”) so all bets are off when they set it up. 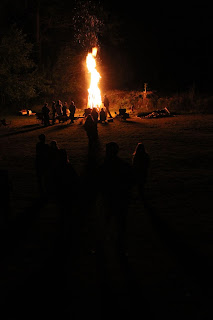 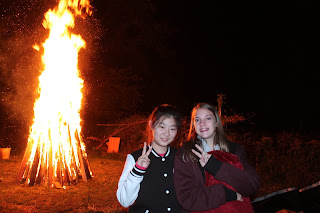 Afterward there were firecrackers, though Kim and I left halfway through for our hotel a town or so away, since we are old and no longer much for tent camping.  Road trip, food, fireworks, and burning things – seriously, we think we did a good job of showing her the US.

In theory the girls slept in the cabin.  In practice they spent most of the night talking in the way that teenagers will.  Lauren did assure me that it was still dark when they finally fell asleep.  Mostly.  I’m guessing they’ll sleep well tonight.

It was a fairly uneventful drive back, as Kim and I were the only ones awake for much of it.  We took one last swing through the chickens once we got home, and then took Xia back to the hotel to be reunited with her group.

Welcome to America, Xia.  It’s a big, loud, often insane place, but warm-hearted and mostly friendly.  Come back and visit us soon.
Posted by David at 9:51 PM

We hosted two Chinese students a couple of summers ago. Communication was quite challenging, since they spoke practically zero English, Kimmy takes French in school, and her older sister who is able to express simple things in Mandarin was away studying abroad. It turns out that gestures work even across East-West cultural divide and mean roughly the same things, no matter what travel etiquette books tell you.

Our youngest babbled incessantly in Russian, which was her primary language at the time, leaving me concerned that our guests may have learned some words that they will use back home as though speaking English.

It was a mixed experience for everyone. Glad that you feel more positive about yours ;-)

Gestures always work! Although I know a few that I'd hesitate to employ, even if they are pretty American. She can learn that aspect of American culture on her own, I suppose.

We really didn't have anyone here who could speak Chinese (Lauren's second-year middle school Chinese is not particularly conversational), but it went well. I'm sorry your experience was so mixed!

I confess to wondering what her parents must be thinking about all this, with their daughter so far from home. I guess that's what happens when you have daughters of your own. She's in good hands, we promise! :)