The Price of the Fair

We were up early this morning, because that is what poultry farmers do and at least for the duration of the Fair that’s more or less what we are.  I don’t claim to be a real farmer, but I do play one for the 4H.  And the birds are real enough.  The goal was to get the chickens and turkeys over to the Fair before it got too hot or crowded.

Poultry is a fairly labor-intensive project as 4H projects go.  You get the chicks and poults early in the year, sometime between January and March.  You raise them as chicks – we keep them in the living room or the basement until the weather warms up and/or they get big enough to take out to the barn.  And every day you go over and feed them, water them, take them outside and bring them back in.

This weekend, for example, was given over largely to various bird-related projects.

There was an outbreak of critters in the old chicken pen, for example, so we had to shovel out all of their bedding (no small thing for a 12-foot-by-12-foot enclosure on a hot humid day) and dust them all with Critter Powder, which is a short phrase that covers a multitude of fascinating experiences, many of which require showering after.

And yesterday, having brought home the two roosters to go with the hens we took out of the barn on Sunday, we gave them all baths.

There is nothing on this earth quite so ridiculous as a wet chicken. 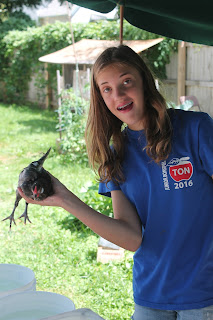 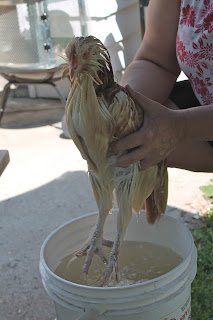 This morning Kim and I were up a bit after 5 to go get the turkeys.  We’d loaded up the van the night before with a pile of things and our friend’s big dog cage and we headed off down the highway.  Momo (the hen) and Edmonton (the tom) came wandering out of their pen as they always do when we open the door, and it was fairly easy to guide them into the cage.  It was less easy to lift that cage into the van, but we did and then headed back home.  I dropped off Kim so she and Lauren could pack up the chickens, and I headed off down the road with the turkeys toward the Fair.

If you’ve never driven with a turkey in the back, you’re missing out.  They periscope up and look around.  They squeak and chortle.  And they make good use of the tarp you put down underneath the cage to protect your vehicle, so don’t forget the tarp unless you really enjoy shampooing automotive carpeting.

But turkeys are fragile birds, for all their size.

I got them to the Fair and into their pens in the Poultry barn.  Edmonton adjusted well – he fluffed up his feathers and gobbled at his neighbors and generally behaved as a blue-headed beachball ought to behave.  Momo, however, just sort of lay there in her pen looking stressed.

Kim and Lauren arrived with the chickens and we got them situated in their pens as well, and I ran home to pick up Tabitha and get her to her viola camp that the school district is running this week.  Having deposited Tabitha and her viola, I went back to the Fair and was dismayed to find that Momo had not improved.

Kim, Lauren, and I went outside to talk about what we might do about this, and soon the Poultry Superintendant came over to express his concerns.  “We were just talking about that,” we said.  He went back into the barn and came out again immediately to let us know that Momo had passed on.

She was a good turkey – taller than the toms and named, oddly enough, for Muhammad Ali because Lauren thought she was the greatest. 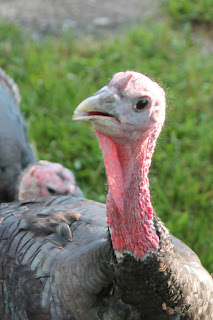 These things happen, and fairly often from what we can tell.  Momo wasn’t the only one this morning, either.  We figure it was a heart attack or something similar – domestic turkeys are prone to that sort of thing, since as meat birds they are bred for size above all else and it often overwhelms them.