It’s getting down toward County Fair season again, which means that everything is moving toward its endgame.  And for the turkeys, this really is the endgame – they will outlive the fair by less than two weeks.  So in the meantime, we treat them well.  They deserve it.

Every morning we head over and take care of the chickens and then let the turkeys out to roam around the grass outside the barn for a while.  They like it out there.  They tend to stick together and are easily herded back in when it’s time to leave so it’s not any big trouble for us.  Mostly they just walk around, chuffing like steam locomotives and occasionally panicking at nothing and flapping their wings to try to take off.  That’s a startling sound the first time you hear it – they have big wings – but it never leads to anything.  Eventually they settle down in a slightly different portion of the grass and go back to chuffing, eating, and occasionally gobbling.  We put them back in their pen when we leave, though the door to the outside fenced-in run is open so they can still go outside if they want.  They always do.

And then in the evening we go back to shut them in for the night, and they get to wander around a bit then too.

Today Lauren and I went over to take care of the turkeys and chickens, but this time Lauren wanted to work with Whitney (nee Goober), her Rosecomb Bantam pullet.  Whitney is going to be the showmanship bird this year, so Lauren has to get her used to being handled and exhibited.  Fortunately Whitney is a fairly sedate little thing for something the size of a pigeon, and is generally happy to sit with Lauren out in the grass and go through the showmanship routines.

Until she looks up and sees this: 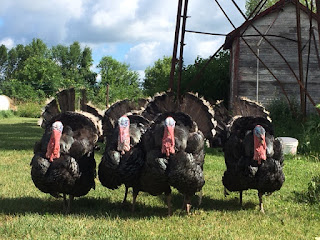 Scarers on the floor!

The turkeys are amiably curious birds, and they love to be wherever you are.  If you wander off to do something, they will – eventually – turn up by your side, chuffing and milling about.  This isn’t a big deal when you’re human-sized, but when you’re a chicken roughly the size of a turkey’s thigh it can be a bit intimidating.

So Lauren moved over to a new portion of the lawn while I distracted the turkeys and got them to wander over by me.  We sat together for a while until Lauren and Whitney had done their bit and then we herded everyone back to their respective spots.