Despite the fact that the Fair is the central focus of the week and has taken up nearly all of our time, it has not happened in a vacuum.  Believe it or not, other things have happened, even here in Our Little Town, where we’re lucky to have one thing happening let alone several.

Tabitha decided that she would learn how to play the viola this summer.

There are few violas in the Local Businessman High orchestra, and she saw an opportunity.  Plus it’s not all that different from playing the violin.  The only really tricky part is that violin music is written in treble clef while viola music is written in alto clef, which makes sense if you know music.  If you don’t, just know that switching clefs like that is a bit like taking all the letters in a book and substituting the letter two places previous in the alphabet and then being expected to read it in 4/4 time.

She’s been taking some lessons with her old violin teacher and doing pretty well.

But the Public School District also offered a Strings Camp this summer and she figured that it would be a good chance to get a whole lot of practicing in.  Naturally this camp was scheduled precisely for Fair Week.

So every morning before Lauren and I would head to the Fair, Tabitha would be heading over to one of the middle schools by 8am to practice.  We’d pick her up around lunchtime, and usually head on over to the Fair.  It has been a busy week.

Friday was the concert.

Kim had to work, so I hung out with Lauren at the Fair for a while until it was time to go over to the other high school her in Our Little Town.  There was plenty of seating, so I found myself a nice spot and settled in.

It was a lovely concert.  They broke it out into three groups – Beginners (very small), Intermediate, and Advanced.  Tabitha ended up in the Advanced group.  Each group did a song or two – the Advanced group performed a medley of Queen songs and did them quite well.  And then they all got together and performed two combined numbers.

Tabitha got to be up front for a solo in one of them, though a) there were about eight people up there for that and b) the rest of the song was so loud that I couldn’t really hear her apart from the group.

But seriously – a solo on an instrument that you’re just learning?  How cool is that! 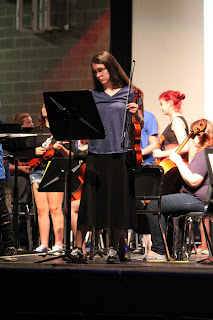 The viola was my maternal grandmother's instrument. Also, oddly enough, her name. But that's a story not worth the time to tell.

We could never get our girls interested in 4H or FFA - not for lack of trying.

I've noticed over the years that these "Fair" blogs rarely rack up a substantial # of comments. Just thought I'd do a fly-by to suggest that we all find this interesting, entertaining and fun. There just really isn't a hell of a lot that can be said that has not been said to death.

And David -- Our "girls" are over and just under 40. They'll always be our "girls" ... not to sound condescending (says the rabid feminist.), it's something that just is ... water is wet and all that.

I remember talking to one of my friends a few years back - we were both in our early 40s at the time - and she was complaining about how her parents still thought of her as a child in some ways even though she had kids of her own by then. "Look at your son," I told her. He was about 8 at the time. "Is he ever really going to be a grown-up to you?" "Okay," she said. "Point to you." They grow up, they become adults, and still somewhere in your heart they're always the kids you remember. That's how it is.

Thanks for taking notice!