Way back in the Paleolithic, when I was an undergraduate, I had a work-study job as a researcher for an archeology professor.

He was working on a ghost town in southern Utah – a former silver mining town called Silver Reef that had blown up rather suddenly when silver ore was discovered in some of the sandstone hills in that area (a geological oddity, apparently) and then deflated just as suddenly when the ore played out.  The whole town existed for maybe fifteen years, from the mid-1870s to the very early 1890s.  At its peak it had about 1500 residents as well as a couple of banks, some saloons, and a Chinese quarter, complete with all the racial tensions that 19th-century American life could offer.

Including the grad student there were five of us in that lab aside from the professor, and we all got along well.  It was a good place to work.  The others mostly worked with the mountain of artifacts that the professor had dredged up a few years earlier, but my job was to sift through the microfilm archives of all of the Utah newspapers of the period looking for any reference to Silver Reef or its residents.  There were a lot of references, actually – people were always moving about, visiting or simply passing through.

So it is no wonder that I remember Silver Reef fondly.

We really didn’t plan this vacation all that thoroughly.  We knew when our flights were and we knew when the hotel reservations for Grand Canyon were, but beyond that we left things pretty loose.  And when we discovered that Silver Reef was just a highway exit away from Zion National Park, we decided to go.  I’d never seen the place, and the girls thought it would be cool to visit an actual ghost town.

Query: Is it truly a ghost town if there is now a town there?

Answer: Maybe.  Or maybe it’s just a zombie town, risen from the dead to shamble about the world of the living.  But it’s still interesting.

Silver Reef is now some kind of bedroom community, though to what larger metropolis I could not tell you.  The modern homes encroach fairly close on the old ruins and the museum (which is inside the old Wells Fargo Bank and Mercantile building), but the ruins remain and we will just call it a ghost town nonetheless.

We pulled into town about an hour before the museum closed. 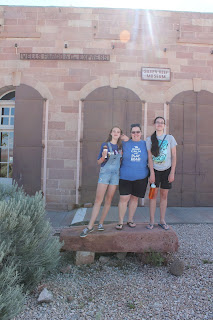 The museum is staffed by a dedicated corps of volunteers, one of whom spent much of the next hour patiently showing us just about every artifact in the place and explaining its purpose and how it fit into the history of the town.  It was fascinating, really.  And there in one of the display cases was a photograph of my old professor, who still comes back to visit now and then.  Apparently we just missed him by a few months.  I think the volunteers were amused by the fact that I had that connection to the place.

The tour ended at the back of the museum, where our guide showed us the “reefs” that had given the town its name. 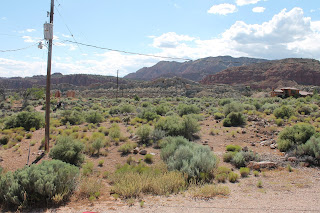 And after that we raided the gift shop (museums like that live and die on their gift shop sales, so we supported them well) and were then let loose on the grounds to examine the site at our own pace.  They’ve got it set up pretty nicely, with some loose gravel paths to get you from one place to the other, and just about everywhere you look there are the kind of artifacts that archeologists love but which fetch no money on eBay so they’re pretty safe where they are.  They do have polite little signs asking you to leave them there, though, lest you be tempted. 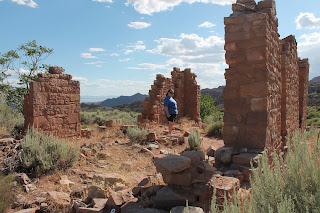 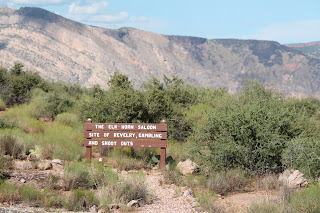 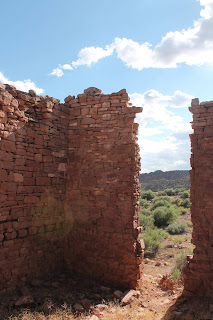 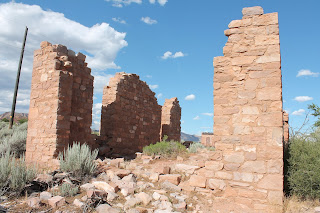 We walked up and down the old main street for a while, and then decided that we’d seen enough and headed back to the highway. 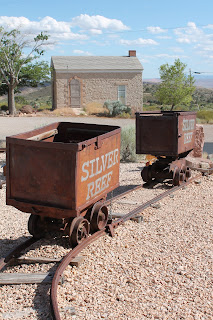 I'm so delighted to see someone else who likes to spend money in the museum / park gift shop! At state / nation parks I always try to buy something (like, say, postcards) to support the park.

ALSO: The postcards I received are AWESOME!

Glad you liked them! It seemed right to send a couple the other way. :)

I used to run a historic site with a museum gift shop, and let me tell you how important that was to our survival. So I don't mind spending money in those shops, as it keeps those places alive for the next time.

"I used to run a historic site with a museum gift shop ..."

One of these days I will remember to check the box. On that day the Publishers Clearinghouse Prize Patrol will also appear on my doorstep.

I've written about that site before, though not for a while. My favorite post about the place was this one, but I also wrote about it here.

Well, I can see why I missed the first one - 'twas a bit before I found you.

Just never made the connection on the second.

And both lack a little, uhhh, something. Perhaps it's that they're non actually about the Museum. or something.

Trebuchets are wonderful toys. Have one on my desk, loaded and ready to launch at the next idiot that fails to knock; and a rather larger one with a 750 lb. counterweight mounted on a trailer out in the yard. Never know when the neighbors are going to go all zombie on me. Of course, with some, that would actually be an improvement.

Well, maybe someday I'll write more about the museum itself. There were a few good stories in there.

A 750lb counterweight would make a mighty powerful trebuchet. I hope the neighbors are suitably deterred. I've got one neighbor who might be improved by being undead as a zombie - at least he'd recognize his need for brains, as opposed to the blissful ignorance he maintains on the subject at present.

Sadly, I'm reaching my limit on nature-type books to purchase from parks & forests. I'm pretty sure I have more tiny print botany/identification/history type books than I'll ever read. Especially since I never take my reading glasses anywhere and so read almost exclusively from my kindle.

I generally buy books about the history of the place if I'm buying books, though most of the time I get keychains that I can use as Christmas ornaments. What Kim and the girls buy is up to them.

Still haven't been able to force myself to use an e-reader unless there is absolutely no other viable option, which is why Amazon did not send me any rebate checks this week. Oh well. My eyes are in that odd phase where it's actually easier to read without my glasses anyway. I'm sure that will end soon.